Tributes have flowed for a US actor, writer and LGBTI activist who died last week while on a hike in central Australia.

Matt Palazzolo, 33, is believed to have suffered heatstroke while climbing Mount Sonder on the popular Larapinta Trail, west of Alice Springs.

Local police told the ABC Palazzolo and a companion had become separated during their descent and the companion alerted authorities to Palazzolo’s disappearance.

“They both descended the mountain, unfortunately it appears the deceased took a wrong turn at that stage,” Duty Superintendent Burgoyne said.

“His partner made it back to the Redbank Gorge carpark and raised the alarm, but unfortunately the 33-year-old didn’t arrive and his body was eventually located about 400 metres down the track where he’d turned the wrong way.” 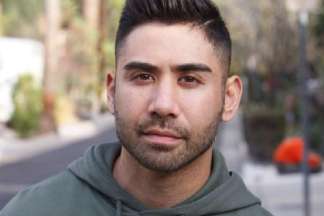 “It’s almost physically impossible to put back the fluids that you’re going to lose as quickly as you’re losing them,” he said.

“Unfortunately people become dehydrated very rapidly before even realising that it’s even happening.”

News site WeHoVille reported Palazzolo was heavily involved in local politics, and the man’s father, Pat, paid tribute to his son’s activism in a Facebook post.

“There were times when I reacted with resentment when people acted or spoke badly towards or about my son Matt because of his sexuality,” he wrote.

“But he seemed to always react with compassion, love and understanding.

“He told me once that everybody has their own timetable for understanding what they previously didn’t understand.

“But he was also a determined advocate for gay rights, determined to bring awareness and knowledge to those who didn’t yet have it.”

I’m heartsick. The world has lost another amazing soul way too soon. @MattPalazzolo was one of the most loving and caring people I’ve ever known. In his short time with us, he affected so much positive change in the world. He was loved by so many. #RIP https://t.co/v6pGKZxOTd

Finally taking the time to mark the sad and obscenely premature passing of my friend Matt Palazzolo, who died of heat stroke while hiking in Australia this past week. Matt was incredibly talented and a truly gentle spirit. His loss hurts. pic.twitter.com/cTORp3dazB