Times, they are a’changing. 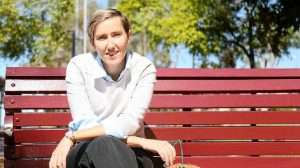 Growing up in Rockhampton, Rebecca Leeks was too scared to come out as a lesbian.

A decade on, the now 32-year-old is an organiser of the Marriage Equality rally which starts outside Saigon Saigon on the riverbank in Quay Street at 1pm tomorrow (Sunday, August 16).

Rebecca, a member of the Committee of Equal Love, has grown very proud of the region.

“I was too scared to come out when I lived in Rockhampton. Scared of bullying and of being ostracised,” she told The Morning Bulletin.

“Growing up here was a bit difficult, but that was a long time ago now and I think people’s perceptions have really changed … I am really proud of the CQ community, I think we have come a long way.”

Rebecca said the acceptance was one she had seen in all facets of the community, not just the younger generation.

“That sort of support is right through the community, not just certain pockets,” she said.

“All aspects of society I think … it is right through all of our lives and it is a great time to be a part of the community.”

During the rally, the march will pass through Capricornia MP Michelle Landry’s office to deliver an open letter in support of marriage equality.

The MP is not a supporter of same-sex marriage but has said in the past that if an “overwhelming majority” of the community were in support, she would back it in parliament.

“This is what we want Michelle Landry and Ken O’Dowd (Flynn MP) to understand by putting the rally on; people in Rockhampton are not backwards. We’re not homophobic,” Rebecca said.

However, it seems that is a hard message to get across.

Recent preliminary poll statistics collected by Ms Landry and Mr O’Dowd paint the picture of a region with a strong stance against marriage equality.

Ms Landry’s online poll, with “thousands” of votes, came back with 70% voting against any changes to the Marriage Act.

Results in the Flynn electorate were similar, with only 30% of the Gladstone region voting in support of marriage equality.

The Central Queensland numbers are in stark contrast to the 72% of Australians who recorded their support for marriage equality in 2014.

(Picture courtesy of The Morning Bulletin)