The Mardi Gras Strictly Kaftan Party is a pool party with a twist, hosted by Dame Jools and Dame Lynda Topp, real dames, and real twin sisters, a pair of yodelling farm girls from rural New Zealand. Wanda D’Parke spoke to the twins ahead of their return to Australia this Mardi Gras season.

Do you remember your uncool guilty obsessions with Abba, Bucks Fizz, and Celine Dion? Everything not trendy with never a “Mean Girl” moment in sight? Who needs a plastic tiara anyway, yeah?

I was in that very same boat, dear reader, and so I long ago discovered The Topp Twins, two women whose celebration of uncoolness made them entertainment legends, too-cool-to-be-cool and camp as a row of tents.

Kiwi twin sisters Lynda and Jools grew up singing country songs to the cows on the family dairy farm in Ruawaro, New Zealand. Their nearest neighbours were thirty miles up the road on horseback.

Those neighbours owned a gramophone and one day Lynda heard something new and exciting — yodelling.

“Lynda used to ride to the neighbours farm thirty minutes up the road on horseback, listen to their old wind-up gramophone, jump back on her horse, race home, get out the guitar, and desperately try and recreate what she had just heard,” said Jools.

“We finally got the sound right and, as an added bonus, became very good horsewomen.”

They then created their first sister act, The Gingham Sisters. Since then the much-loved comedy country duo have gone on to create many more memorable characters including Ken and Ken and Camp Mother and Camp Leader.

The Topp Twins came of age in the early 1980’s, during heady days of political protest. 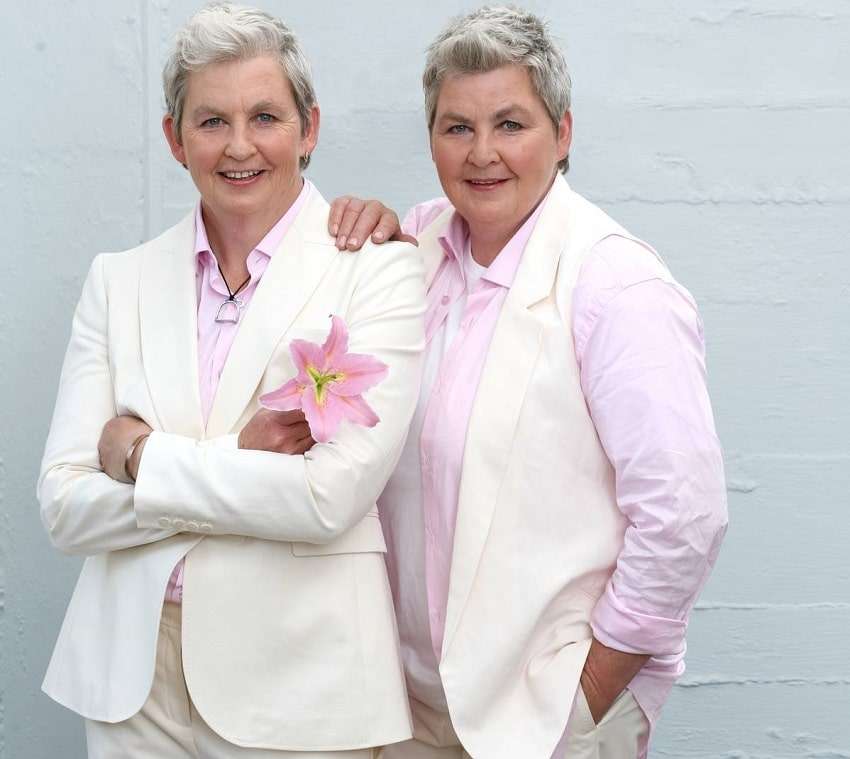 Passionate activists, they put their talents to work for their causes, penning satirical songs, leading marches and protesting for a better world.

As Camp Mother, Lynda ran for Mayor of Auckland, eventually passing her support, and thousands of votes, to her running mate Christine Fletcher. Christine won the race and ousted the non-gay-friendly incumbent… talk about Girl Power!

With fans worldwide, the twins tour regularly, though sometimes the fans are in places they are unlikely to visit.

“There is nothing more exciting than going on tour,” said Jools.

“We haven’t made what we do a job, it’s a lifestyle.

“Apparently we are big Gay icons in North Korea… our movie Untouchable Girls was smuggled into the country via an underground movement and they thought it was just amazing.”

In 2018 the twins were created Dames in New Zealand’s Queens Birthday Honours list.

“It’s pretty exciting to be a Dame,” said Lynda.

“There’s been some pretty weird curtsies. I live down in the South Island, and there’s been a lot of farmers trying to curtsy.

“Most of the time they’re in gumboots.”

Away from the stage, the twins still enjoy rural pursuits like fishing and horse-riding. They will of course have to put away their fishing poles and send their horses off to a resort for a while, as they will soon touring again throughout regional New Zealand and returning to Australia as special guests for the 2019 Mardi Gras season.

The Strictly Kaftan Party, a pool party with a twist, will be held at The Ivy — the first time the Topp Twins have performed in Australia for what seems like a lifetime. I strongly recommend that you book your tickets NOW.

I’m hoping Jools and Lynda return to Australia after Mardi Gras for a national tour. I will absolutely be lining up for tickets. I might even sleep out the night before.

Interview: Jack Vidgen on facing his demons: ‘It almost killed me’