Many of the magazine’s contributors have claimed that it is operating an informal policy blocking all coverage of gay weddings.

Photographer Lara Hotz, who has previously had her work featured on the cover of the magazine, raised the issue in exchange with the editor.

According to the Sydney Morning Herald, the editor responded via text message: “we aren’t sharing Same Sex (sic) weddings at this point.”

Ms Hotz, who is married to her female partner, says she feels discriminated against and undervalued by the magazine’s previously unspoken policy.

“I imagine the majority of LGBTQI persons would be feeling hurt regarding not being represented equally or at all,” the photographer told AAP.

Advertiser and photographer Ona Janzen was “shocked” to hear White was refusing to cover gay weddings.

“If I had known they don’t support SSM I wouldn’t have chosen to spend a good portion of my marketing funds with their magazine, on principle,” she told AAP.

Ms Janzen said it “doesn’t feel right” that a same-sex couple could subscribe to the magazine and be unaware it doesn’t support marriage equality.

Others in the wedding industry hit out at the magazine on social media.

Photographer Alex Vaughan wrote: “Over the past twelve months, emails have been sent, calls have been made and some of the best wedding photographers in Australia have put their support behind a movement asking White Magazine to include and represent same-sex weddings.

“Either White Magazine should represent same-sex weddings or make public their unwillingness to do so so that consumers and vendors can make informed choices on whether or not they want to support the magazine.” 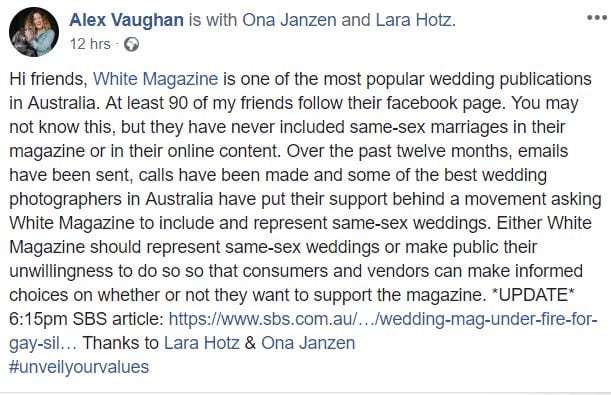 Another photographer added: “Absolutely disgraceful, and White Magazine should be ashamed of themselves for discrimination. I believe everyone is equal no matter your background, orientation, or preference of anything in life.”

Advertiser and eco-wedding expert Sandra Henri was disappointed with White‘s “silence” on the day the postal survey result was announced in mid-November, which showed 62 per cent of respondents favoured changing the law to legalise same-sex marriage.

“The silence has continued since then,” she told AAP.