Most readers will not know the name Laurie Deane. However, most over 25 years of age, know of Dame Sybil von Thorndyke, legendary founder, hostess and director for forty years of Brisbane’s Annual Queens Birthday Ball, now the longest running gay event in the world.

A sensationalist tabloid once breathlessly reported that Laurie Deane lived a fabulous double life. By day, Laurie was a mild-mannered schoolteacher, specialising in Art. By night, he regularly transformed into Dame Sybil, a witty and charming theatrical kind of lady. For half a century the Dame was one of the true queens of Brisbane’s demi monde.

Today, whilst Dame Sybil occasionally makes an appearance, Laurie Deane is an habitué of innumerable artistic presentations especially at Brisbane’s Southbank Theatre complex. He is a card-carrying member and regular patron of the Queensland Symphony Orchestra, the Queensland Ballet and the Queensland Theatre Company.

I have always been intrigued by Laurie’s own take on his dual lifestyle. He speaks of “putting on Sybil”. She is a fabulous character whom he inhabits. Both Laurie and Dame Sybil are entirely authentic persons, though with distinct characteristics and idiosyncrasies. They share one feature in common. Both display a lifelong preference for Bacardi and Coke.

Laurie Deane is professional, organised, self-assured and soft-spoken. His demeanour carries a hint of steel which betrays his ability to calm and focus a classroom of teenage students or a stage full of inebriated, outrageous drag queens.

Sybil is a fun-loving ingénue, a fabulously presented and sophisticated entertainer and mistress of any social setting. Both Sybil and Laurie are widely read, well informed and community minded over-achievers.

Laurie is the eldest child of Ron and Una. His parents were proud of their children and patronised many Rainbow community events their son arranged. Laurie’s siblings include sister Carol and brother Kevin, who passed away last year.

Laurie is particularly close to a gay cousin Greg, who travelled from New South Wales to attend all the early Queens Birthday Balls. He speaks proudly of his two nephews, Carol’s sons.

Laurie’s family was somewhat unique for its time. In an era when many parents disowned their rainbow offspring the Deanes bestowed unqualified love and support on their children.

However, they dealt with difference in a way typical of the era. Laurie recalls his dad always talked about his ‘projects’ rather than ‘the Queens Ball” and his mum always referred to ‘costumes’, not ‘drag’.

Although best known for his association with the Annual Queens Birthday Ball, Laurie played a leading role in many other rainbow community initiatives.

Laurie was Treasurer and fundraiser for Team Brisbane for two years in the lead up to the first Gay Games in San Francisco in 1982. He continued in the role for the next 12 years.

In 1998, he and partner Wayne attended the Gay Games in Amsterdam where he competed in the mature age 100 metre dash coming 4th in a heat. This qualified Laurie for the final.

Unfortunately, he stumbled during the final, but, as always, he picked himself up, dusted himself off and finished with style.

Laurie’s first posting was to a one teacher school at Bowenville on the Darling Downs.

He told me many years ago about the bus trip out there. He arrived in the middle of winter, just as night fell, to a tiny schoolhouse bereft of electricity or heating. The infamous westerly winds of the Downs blew fiercely that night, and Laurie froze.

After Bowenville, he transferred to Warwick where he taught for several years.

However, his teaching career blossomed following his appointment to Coorparoo State High School as an Art teacher.

Laurie immersed his students in the arts. He herded them through art galleries and to plays and dance exhibitions. He instigated of the tradition of school musicals in Queensland High Schools.

That was a truly mammoth task, undertaken without scaling back either teaching commitments or a busy schedule of after school rainbow community activities.

Indeed, as his work became better known, Laurie faced pressure both from the gay community and his headmaster and the school parents to increase the scale of events. For many years, he produced the annual school musical and coordinated four major annual Rainbow Community events.

As an eminently practical person, he designed costumes and sets he could use for both. Drag queens often needed to trim down to a more svelte figure in order to fit the costumes originally designed for more youthful and athletic performers.

Laurie’s enterprising double life as a teacher and a LGBTIQ leader was not without consequence. In the dying days of the authoritarian Bjelke-Petersen regime, the premier often made use of the threat of the homosexual boogeyman in an attempt to rally conservative voters.

Tired and exasperated by the government’s corruption and hypocrisy, mainstream Queenslanders no longer cared. Furthermore, the school community stood steadfast behind the stellar teacher. Sadly, that nasty incident was not orchestrated by the police or government.

Dame Sybil von Thorndyke played a number of roles in the shows which were a feature of her balls.

She became an accomplished dancer, joining Wendy Low’s Ashgrove Dance Studio which for many years provided backup dancers for the Queens Ball’s  drag stars. Sybil learned to tap and like all great showgirls displayed her shapely gams to the delight of her audiences.

Her fabulous and extravagant gowns were a feature of many a ball.

Thoughout the 70s and 80s the most sort after invitation in Brisvegas was entre to one of Dame Sybil’s all-day soirees.

Conducted in Unit 6 of the Pink Palace on Wickham Terrace, these events often extended to brief interactions across the street in Albert Park.

After a formal luncheon for the more esteemed guests, the hoi polloi was admitted. It is a miracle the floor never gave way under the weight of the crowd.

The most memorable luncheon, for me, occurred during the streaking vogue. An otherwise dreary Sunday afternoon was enlivened by a competition which involved disrobing completely, running down the stairs of the Palace, across Wickham Terrace, rolling in Albert Park’s canna lily patches and rushing back to the party.

The activity caused boundless joy both to participants and observers. As a very junior princess I was not always present for the earlier more refined proceedings. However, I recall the anticipation of mixing with sophisticated men and women from around the world. I once met a barrister from London’s Inns of Court who, amongst other things, introduced me to the joy of snuff.

Laurie speaks fondly of his great good fortune in the three great relationships of his life: Jacques, Robert and Wayne (Rangi).

By sheer coincidence, I was in company with Laurie and Wayne on the night their life together commenced. I lived in Flat 2 of the Pink Palace at the time with Brisbane’s Shirley Bassey (Joe Stannard from Innisfail, not the Shirley Bassey from Cardiff).

My newfound beau (a handsome nurse from Royal Brisbane) and I walked home from a bar with Laurie and Wayne. 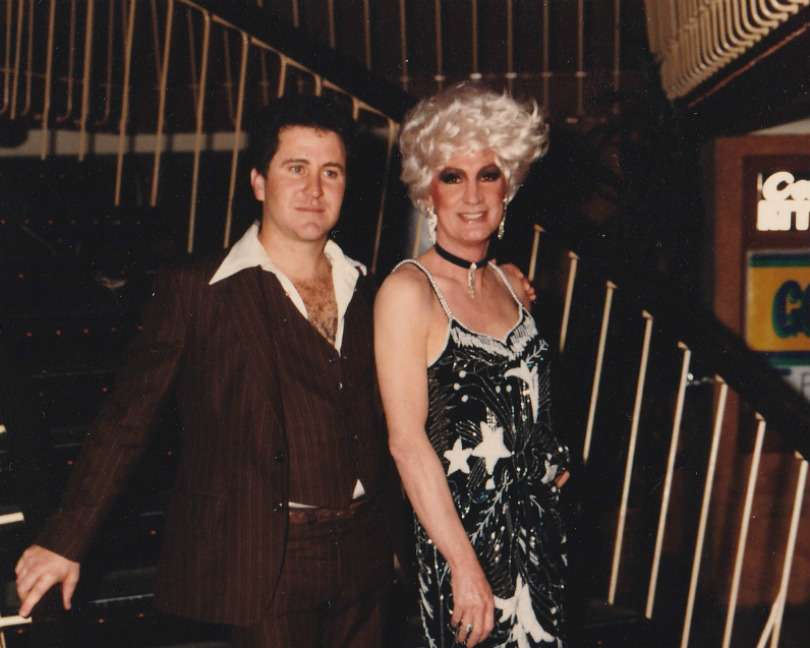 World travel played a large role in Laurie’s life. He and Wayne enjoyed many trips overseas during their life together.

A keen photographer, Laurie catalogued his innumerable photos into an extensive and treasured set of tour albums.

A glance through them confirms his love of art.

Every visit involved visits to the great museums, galleries and historical sites of the world. Laurie corresponds with many of the friends he made during his travels. It is not uncommon for him to host them when they visit our fair land.

After many years as resident dame of the Pink Palace on Wickham Terrace, Laurie purchased a one-bedroom cottage. He chose a house on an unbelievably steep street in Red Hill.

I and other mates assisted to move his object d’art and furniture to the new home. Laurie and Rangi then renovated and expanded their digs into a fabulous inner-city palace.

The most prominent feature is the entertainment deck with bar and grill. The superb west facing views take full advantage of the location.

Although never, as far as I know, consecrated an honorary lesbian, Laurie came close to such an honour. He was undoubtedly an early feminist, in a time when misogyny and separatism were popular attitudes even amongst homosexual men.

Laurie took people as he found them and treated everyone with respect. Appreciative Brisbane lesbians invited him to women only events. Female community leaders of the time including Jude Abbs and Cynthia McBride acknowledge his contribution in ensuring gay and lesbian events included lesbians, not always a given, back then, or now.

Dame Sybil and her great friend Robyn Bolen co-jointly judged the costume awards at the Queens Ball. Several women who cut their teeth in appearances at Dame Sybil von Thorndyke’s Queens Balls, went on to successful careers in the Australian music industry. They include Judi Conelli and Carol Lloyd of Railroad Gin fame.

Laurie Deane is a living treasure. For over forty years he maintained a number of traditions which gave the Brisbane Rainbow community a sense of permanence and hope for better days. Those of us dragged along in his wake learned skills that stood us in good stead when HIV struck.

That Laurie Deane’s spectacular life and work all happened under the nose, some might say in spite of, the actions and active disapproval of the most brutal and repressive regime in modern Australian history only adds to the lustre of his achievement.