New details have been revealed about Lady Gaga’s killer TV role in the upcoming new series of American Horror Story. 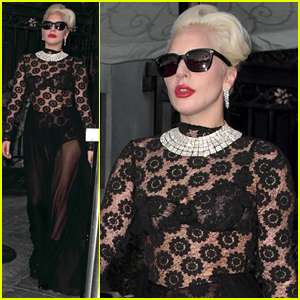 In the anthology-style show’s new series “Hotel,” Gaga plays the scheming Countess Elizabeth, a wealthy bisexual socialite who seduces her hotel’s guests and “maintains her looks not from a steady diet of kale but from imbibing human blood,” according to Entertainment Weekly.

“I’ve just been weeping while I’m here because I have returned to something I’ve believed in so much, which is the art of darkness,” Gaga gushed to the publication.

“It’s not something that everyone understands, but, for the people that do – Horror Story fans, my fans – there is a true connection between us, and it’s a language within itself.”

Actor Matt Bomer and supermodel Naomi Campbell join the show’s existing cast for the new series, which will premiere on US television on October 7.

Gaga’s co-star Kathy Bates teased her Twitter followers during filming: “Was it Norma Desmond, Jean Harlow or Marilyn Monroe descending the staircase towards me in a shimmering silver gown? No, it was @ladygaga!”

But can she act? “I always wanted to be an actress,” Gaga told Entertainment Weekly.

“I was terrible at auditioning. I would clam up. I was very awkward. I wasn’t particularly pretty in high school. I was sort of … blooming. Now I’m here.”

The show’s co-creator Ryan Murphy, who has previously tweeted Gaga is “TERRIFYINGLY GENIUS” in the role, told Entertainment Weekly that on the first day of filming, Gaga showed up “wearing diamond pasties, a Band-Aid on her boo-ha, heels and a black veil that Alexander McQueen made for her on the day before his death.”

“Then the crew gasped in delight, and we were off!” he said.