The King of the Catwalk, Sinon Loresca caused a social media firestorm last week over a visit to Brunei.

The openly gay Filipino social media influencer dismissed recent protests against the sultanate. He told his 1.6 million Facebook and half million Instagram followers “some news so exaggerated.”

That ‘exaggerated’ news reported on laws allowing religious courts penalty options such as death by stoning, whipping and amputation.

Sinon Loresca built his social media profile with fun videos of himself walking in high heels. He usually dresses in either speedos or flimsy dresses to best show off his buff body.

Thrown out of home at the age of eighteen, he lived for a time in a Manilla ‘garbage mountain’. He now lives with his husband in London but frequently returns to the Philippines for television appearances. He also travels the world for live meet-and-greets with his fans.

The King of the Catwalk in Brunei 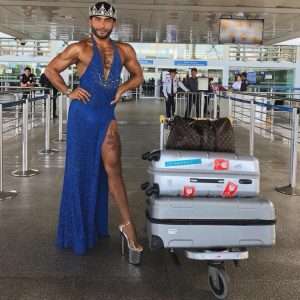 On 9 May Sinon posted on Facebook, “On my way to Brunei. See you.”

He accompanied the post with a photo of himself posing in a provocative dress and high heels at an airport in the Philippines.

On my way to LONDON, UK 🇬🇧

He neglected to mention that he posed for that photograph in June 2018, not last week.

A day later he posted a picture of himself apparently in Brunei. In the photo he wore attire Bruneians normally wear when playing a Middle Eastern goat-herder in a Nativity Play.

Which is to say, never.

Brunei discriminates against religions other than Islam. It none too gently discourages any celebration of Christmas.

The following day Sinon Loresca went Live on Facebook. During the broadcast he gave a shout out to his fans in Brunei. He apologised that because he went there for a private VIP party, time never allowed for meet-and-greets with them.

He repeated his opinion of Brunei as a safe place, after thanking the country for the welcome extended him.

“I would like to say to the world that… to all the LGBT don’t be afraid to travel in the Middle East.

“I’ll be honest with you guys — Muslim people are very kind, very polite and very friendly.”

“Sometimes it is true, sometimes the news is so exaggerated”

On a Facebook post he wrote of Brunei as “one of the safest places on Earth. Lovely and friendly people. Some news so exaggerated – stoned to death is not real NOT AT ALL. BRUNIE [sic] is a beautiful country. Period.”

Brunei of course is in South-East Asia, not the Middle East.

It appears someone schooled the King of the Catwalk on that fact and on Monday, the last day on his stay in the Sultanate, he posted a new photo. This time, he wore more appropriate traditional clothing.

The global protests against the sultan and his regime never disputed the beauty of the country. They never argued against the kindly nature of Brunei’s people or other Muslims, or their good manners.

The protests focused on the barbaric punishments proposed by the sultan and his regime.

In fact, a handful of anti-Muslim protestors attempted to join a Brisbane protest in May. Organisers of the rally opposite the Brunei-owned Royal on the Park refused to allow their participation.

Muslims are not the target of the protests and nor are the people of Brunei. Indeed they are the real potential victims of the laws.

The protests target the autocratic Sultan of Brunei and his illegitimate regime. That despot rules a peaceful country under a state of emergency imposed over 50 years ago.

The news is no exaggeration.

In December last year the office of the Bruneian Attorney-General quietly issued a notice to its website. That notice announced that April 2019 would see the final phase of a six-year rollout of Sharia laws.

On 30 March 2019, the office of Brunei’s Prime Minister issued a statement confirming the changes to the country’s criminal laws. Not coincidentally, Hassanal Bolkiah, the Sultan of Brunei, also performs in the role of Prime Minister.

After global protests the Mission of Brunei Darussalam to the European Union defended the laws in an official letter to the EU. The latter confirms that media reports of the laws contained no exaggeration.

“The penal sentences of hadd – stoning to death and amputation, imposed for offences of theft, robbery, adultery and sodomy have extremely high evidentiary threshold… the punishment of whipping is to be executed by the same gender of the offender…”

Media coverage of the laws do not differ from the statements of the Bruneian government. There is no exaggeration.

Global LGBTIQ driven protests saw the all-powerful Sultan of Brunei back down. He announced the extension of the current moratorium on the death penalty to the new laws.

The main defence of the laws focusses on the argument that Brunei will never enforce them.

Then why introduce them?

Courts prosecuted the laws implemented in earlier phases of the rollout.

An Indonesian man smoking in public during Ramadan found himself charged. So did an Australian lawn bowls coach caught alone and unchaperoned with a female member of his team. (After spending up to $150,000 the pair escaped to Australia. They now live together. It is not far-fetched to speculate that adultery took place and so under the new laws, both would risk death by stoning.)

A public servant who posted against new halal laws found himself charged with sedition. The regime subsequently changed the law to make the possible penalty for his crime ten years imprisonment. He is now a refugee in Canada.

However, that now seems unlikely.

His hotel accommodation appears run down, despite booking sites showing beautiful hotel rooms at ridiculously low prices. Unsurprising, as the occupancy rate for local hotels hovers just over 34%. Only East Timor of all the ASEAN countries suffers a lower rate.

Sinon Loresca, the King of the Catwalk, is a marvellous entertainer. His videos are a joy to watch. But he is wrong when he says ‘stoned to death is not real’.

He is not the first entertainer seduced by Bruneian cash. Whitney Houston reputedly received US$7 million to sing in Brunei. Entertainers like Mariah Carey, Michael Jackson, Pamela Anderson and Raquel Welch partied over the years with the Sultan’s gay son. Caitlyn Jenner and Gus Kenworthy attended Price Azim’s birthday party in 2016.

It seems for his fee, flights and the cost of a cheap hotel, the lady who hired Sinon convinced him to wield his influence over his many fans on behalf of the regime.

He is famous. He’s come and gone. LGBTIQ Bruneians and many others remain, and they remain under threat of some of the most unjust laws on the planet.

It is past time people stopped pretending this despot is some kindly benevolent father of his country and his laws, not barbaric, but merely quaint and misunderstood.