Tiger King: Murder, Mayhem and Madness brings to the small screen an unbelievable cast of real-life characters. The Netflix docu-series highlights Americans who conduct ‘big cat rescue’ operations. They then house the lions, tigers and other big cats they ‘rescue’ in for-profit roadside zoos. The series star is undoubtedly Joe Exotic, a gay mulleted cowboy, conman and serial fantasist.

Watching the early episodes of Tiger King, it’s easy to become an admirer of Joe Exotic. He is undoubtedly charismatic. People drawn into his orbit become devoted to him. The narrative is clear — a heroic figure obsessed by a worthy cause and targeted for persecution by bitter and unrelenting haters.

But there’s much more to the man who calls himself a gay, gun-toting, mulleted redneck and others describe as the gay mulleted cowboy of big cat rescue.

From January this year, circumstances meant Joe became unavailable to promote the show other than via email or over the phone. At that time, a judge sentenced him to 22 years in prison for wildlife violations and hiring a hitman.

He grew up as Joseph Screibvogel on a family farm in Kansas. As an adult, he worked as a small-town police chief and as a bouncer in a gay bar. He also worked in a pet store where he developed an interest in big cats.

Stories Joe relates from those years include a memorable incident where he stood up to school bullies, a suicide attempt, the writing off of a vehicle and a broken back. Remarkably though, none of those happenings managed to make a mark on any record anywhere — not in school, hospital, police or media files. Nor do other people in his life remember any of those incidents.

After his brother died in a car accident (that actually did happen), he used money his parents received in a settlement for the accident to purchase a horse ranch in Oklahoma. Joe turned the ranch into a big cat zoo — a ‘sanctuary’ — filled with animals from the ‘big cat rescue’ he founded.

He fed the lions, tigers and other big cats on donated horses which he shot and fed whole to the cats.

Along the way, Joe enjoyed the company of multiple husbands. He first married 19-year-old Brian Rhyne who he met while working as a bouncer at the Round-Up Saloon. Brian died of complications from HIV not long after Joe set up the zoo.

A few months after Brian’s death, Joe started dating a man named JC Hartpence. They married, though unofficially with same-sex marriage not yet then recognised. The relationship proved volatile and eventually ended. JC afterwards committed a murder for which he is still in prison.

However, even before JC left, Joe took up with John Finlay, a 19-year-old worker at his zoo. Joe famously paid for a tattoo just above John’s sexual assets branding them as ‘PRIVATELY OWNED BY JOE EXOTIC’.

Joe likes to rattle off a list of his own tattoos and piercings and insists the barbell on his dick piercing is the size of a Master padlock. He has fake bullet holes tattooed on his chest complete with dripping blood, apparently inspired by the martyrdom our hero constantly suffers at the hands of his persecutors.

Both John and Travis insisted to everyone but Joe they were actually straight. According to other zoo employees, both were also having sex with female employees behind Joe’s back. One girl eventually fell pregnant to John and he left to marry her.

When same-sex marriage became legal in the US, Joe went through a second marriage ceremony with Travis, this time just the pair of them. However, the marriage ended when Travis, perhaps high on meth, shot himself dead while messing around with a gun in the zoo’s souvenir shop. According to numerous former employees, Joe is also addicted to meth.

After Travis died, Joe assigned staff to trawl Grindr and Twitter in search of a new husband. He found a young man named Dillon Passage. Dillon was then sleeping on an air mattress at his cousin’s place. Joe married Dillon two months after he buried Travis.

During this time, Joe Exotic’s animal business grew larger and more famous. American law allows citizens to own various exotic species. However, many people who think a lion or tiger cub makes a cute pet change their minds as the animal grows larger, more expensive to house and feed, and more dangerous. Joe ‘rescued’ those animals from pet owners happy to be rid of them. He caged the big cats and charged visitors admission to see them.

He fed his charges on unwanted horses donated by farmers and on expired steaks and hot dogs donated by Walmart. However, his staff sometimes pilfered expired food donations for their own meals, unable to afford food on wages far below the legal minimum. Joe himself even pilfered from the donated animal food, but not to feed himself. Authorities caught him feeding the expired steaks and hot dogs to customers at the restaurant he opened at the zoo. 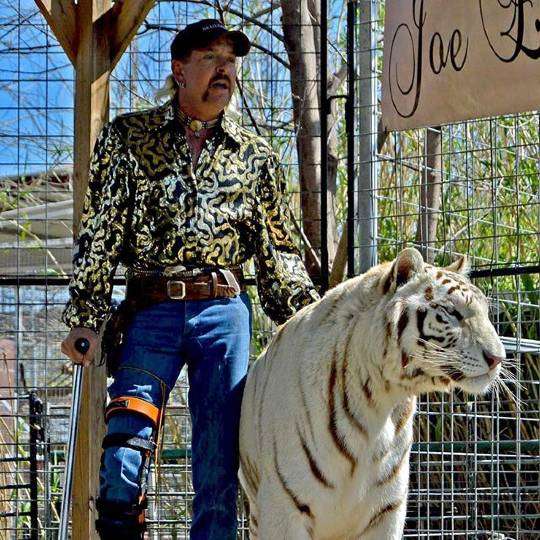 Joe also began exhibiting tiger cubs in shopping centres where he charged people to pet them, and more if they wanted a photograph. He then went on the road as a double act with a magician using the animals in stage illusions. But, Joe being Joe, he stole the magician’s tricks and made the act a solo turn. He sent a business partner to Las Vegas with tiger cubs which he smuggled into casinos, charging the wealthy $2,000 to pet the cubs in their luxury suites.

For his growing business, Joe needed more and more baby animals. However, the animals people donated were generally too large and dangerous for petting so he undertook a massive breeding program. He boasted he bred more tigers than anyone else in the word – the Tiger King.

Joe Exotic made many enemies on his rise to Tiger King but his greatest nemesis proved to be a woman called Carole Baskin. Carole is not, to put it mildly, a likeable woman.

A teen runaway who ended up marrying a miserly millionaire, Carole also founded a ‘big cat rescue’ and wildlife sanctuary. However, she argued with her husband because he prefered to breed and sell the cats, while she wanted to stop the breeding. After he took out a restraining order on her and told the police she threatened to shoot him, Carole’s husband disappeared under mysterious circumstances. Despite an extensive police investigation, he was never found. His daughter from a previous marriage accused Carole of killing him and feeding him to her cats. Of course, the wealthy widow denies that.

With her next husband, Carole expanded her operation and began to advocate against competing sanctuaries that offered cub-petting. Her new husband proved very adept at fund-raising, while Carole discovered a talent for rounding up online followers. Soon, their advocacy began to eat into the revenue of operators like Joe, with shopping centres loathe to endure the online attacks Carole directed against them for allowing operators like Joe on their premises. Joe and Carole found themselves at war.

By now, Joe had embarked on a new phase of his entertainment career – country music. On his YouTube channel, he released some rather fine country songs. Who would expect the Tiger King could write engaging lyrics and sing with a mellifluous country twang? Actually he couldn’t. He paid others to do it but he lip-synced convincingly and denies to this day it’s not his voice.

In the video for the Joe Exotic track ‘Here Kitty Kitty’, a Carole lookalike feeds human brains to a caged tiger from a platter, referencing the accusation that she murdered her husband. There’s nothing subtle about Joe Exotic.

While all this was going on, Joe also found time to run for the US presidency in 2016. As a scamming, meth-addicted, animal-abusing, polygamous POS, he obviously was still not the worst candidate to run in 2016. Nevertheless, he only attracted 962 votes.

But with Carole Baskin’s increasingly influential organisation eating into his profits, Joe Exotic decided to take care of his nemesis once and for all. His first attempt to hire a contract killer ended in dismal failure. The hitman took Joe’s money and departed for endless days on bar stools in South Carolina.

Meanwhile, the FBI got wind of the contract. After learning of the failure of Joe’s initial hiring, they sent in an undercover agent. Long story short — Joe decided to sell some tigers and pay the undercover agent $10,000 to kill Carole Baskin. As a result, he is now incarcerated for the next 22 years.

Joe continues to claim innocence from jail and enjoys support from people who still believe the gay mulleted cowboy, conman and serial fantasist is a martyred hero. That comes as no surprise. People need heroes and often that need clouds their judgement. The human-animal is inclined to irrationality. In fact, a solid fact will only seldom trump a firmly held perception.

Anyway, with producers talking about more shows on this crazy bunch of real-life characters, expect to hear more of the gay mulleted cowboy of big cat rescue.