The LGBTIQ-friendly church MCC Brisbane has taken a stand against homophobia after finding a Neo-Nazi group’s stickers on their signage after marching in the Brisbane Pride Festival’s march through New Farm.

But when they returned to the Merthyr Rd Uniting Church they found stickers bearing the name of the Antipodean Resistance hate group on their signs and banners.

“The first sticker we found was in the middle of the rainbow flag on our sign facing the street,” he told QNews Magazine.

“Someone had already tried to scrape part of it off. When our people saw the Nazi swastika they were really incensed, they just really wanted to get rid of it.

“We later found that other stickers from the same group had been placed on other parts of the building.”

The Antipodean Resistance white supremacist group describes itself as “21st century Hitler youth” and is militantly anti-gay and anti-Semitic. 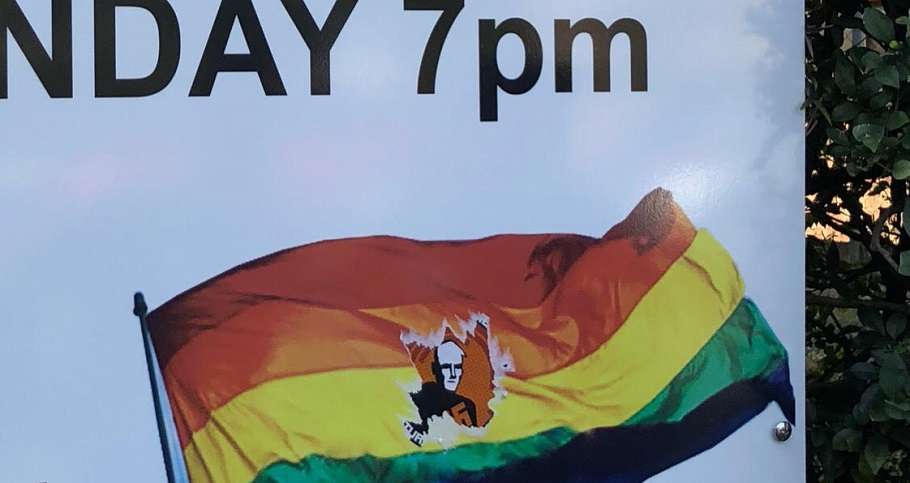 Pittaway, who started as pastor of MCC Brisbane in July, said he wasn’t hopeful of the culprit being found but it was important the entire community unites against homophobia.

“We’re no strangers to this type of thing. We will not respond to hate with more hate, we will only respond with love,” he said.

“We will only respond with unconditional acceptance to anyone who walks in through our doors.” During this year’s Pride March, a group of half a dozen anti-gay preachers again turned up to shout messages in front of the crowd.

Police should’ve put more distance between the “hate preachers” and the marchers, Pittaway said, but the MCC contingent formed a “human shield” to block them and drown them out with chants of “God loves all”.

“If the people of Brisbane are sick of dealing with this hate, I want them to know that at MCC Brisbane there is a safe haven where you can express your spirituality without being exposed to these hate messages,” he said. Pittaway said despite moves to accept same-sex marriages in other mainstream churches, deep divisions still existed with regard to acceptance of LGBTIQ people.

“During the postal survey campaign, other churches around the city said and did incredibly homophobic things. “Many responded by saying, ‘I’ve been going to this church for a long time, and I realise we have different theologies on this but you’ve gone too far.’ A lot of those people came to MCC Brisbane.”

MCC Brisbane meets at the Uniting Church at 52 Merthyr Rd in New Farm every Sunday evening at 7:00 pm.

The religious right was smashed at the election. What happens now?