QNews Magazine talks to three LGBTI Liaison Officers in the Queensland Police Service who provide support and assistance to our community in addition to their regular duties.

Society requires police. We all want to go about our daily lives safe from crime.

Police are entrusted by the community with protecting citizens from harm, preventing crime, enforcing laws and investigating criminal activity.

We expect them to perform these duties equitably and without discrimination or favour.

Male same-sex acts were illegal and although lesbianism was not, all members of the LGBTIQ communities were regarded as guilty until proven straight.

I remember people fearful the consequences of reporting crime would be worse than the violence or harm they’d already suffered. Cops searched houses under flimsy pretexts and when they found no drugs or evidence of other crimes, trashed homes with impunity.

A Detective Sergeant was hounded out of his job, and the state, over his romance with a trans woman. All of us from those times could add much to that list.

The police were our enemy.

It’s been a long strange journey since for those of us who lived through that time. It has been challenging to accept and trust in the changes that have occurred.

First, the Fitzgerald Inquiry exposed the rot and cut a swathe through corrupt coppers. Then, the Goss government decriminalised homosexuality.

Eventually, the police appointed LGBTI liaison officers, police with experience of our community, in an attempt to build bridges.

The Queensland Police Service now welcomes out members of the LGBTIQ communities into their ranks and proactively works to ensure our interactions with the police are equitable and just, without discrimination or favour.

In 2019, the Queensland Police Service is committed to ensuring policing services are available to all members of the community.

I had the great pleasure of talking with three members of the program and came away with two distinct impressions: the liaison officers are huge assets to both the LGBTIQ communities and the QPS, and never underestimate the assistance they can provide if you ever need to deal with the police.

“The times are a-changing. Let’s all move past the prejudice of the past towards mutual respect for honesty and diversity.”
Dr. Wendell Rosevear OAM

Ben joined the liaison program when he came out while serving in Roma, after joining the QPS in 2007.

Sasha was the on-call LGBTI officer for many years on a voluntary basis and, as an out officer of many years standing, joined the program to lend it increased credibility.

Mairead became a liaison officer a couple of years after commencing his gender affirmation process. He noticed a lack of engagement between police and external agencies in his district and wanted to connect more deeply with members of the LGBTIQ community he encountered in the course of his duties.

All three officers are passionate about their role.

Mairead: “I’ve seen people’s perceptions of police change during a short conversation with them.

“However, as long as members of our community continue to have negative interactions with police, progress in this space will be slow.

“It is important that all police officers receive LGBTIQA+-specific inclusion and diversity training to help improve interactions.”

Ben: “Since I started in the role, I have seen an enormous positive shift in attitudes towards the police and believe this is largely due to the hard work and dedication that LGBTI liaison officers put in engaging with members of LGBTI communities and the services that support them.

“The work of the LGBTI Support Network has also been greatly beneficial with initiatives such as the ‘It Gets Better’ video, participation in the Pride march and events such as IDAHOBIT Day and Wear it Purple Day.”

Sasha: “I have 30 years+ service in the QPS as an operational officer. The QPS as an organisation has matured, legislation has changed and there is no longer a need for fear.

“The relationship between the QPS and LGBTI community is a work in progress.  Every day it’s getting better.

“Is it capturing 100 per cent? Probably not, but I do believe the relationships have been strengthened through the work we have done.”

Although the liaison officers put a lot of effort into their work with community organisations, their most significant impact is in their individual interactions with LGBTIQ community.

After his transition, the QPS signalled their acceptance of Constable Devlin by having Mairead raise the Rainbow Flag outside police headquarters to mark IDAHOBIT Day 2016 (pictured below).

“Shortly after the flag raising, I attended a domestic violence incident involving a transgender woman and her gay-identified male partner,” he said.

“The woman had recently commenced her gender affirmation process and the couple were experiencing difficulties within their relationship as she navigated her changing body and his shifting sexuality.

“Neither had high opinions of police, however afterwards the woman told me she only felt comfortable calling us because she’d seen us raise the rainbow flag.

“I didn’t fully realise the power of visibility until that moment.” 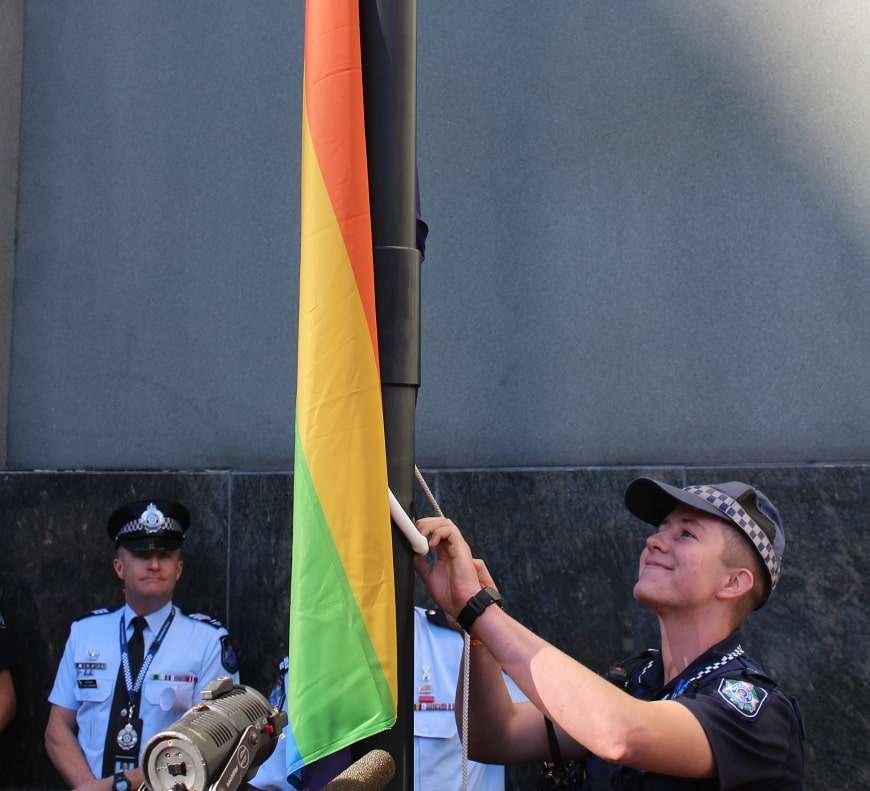 The importance of having officers who community members know will understand and empathise cannot be overstated.

On call as a liaison officer, Sasha received a call from a panic-struck well-known Brisbane professional man.

“He was married with a family but experimenting with his sexuality. He became the victim of an attempted extortion involving a sex tape showing him in a compromising position,” Sasha recalled.

“I managed the investigation, identified the offender and obtained the tape without the complainant ever being exposed to either his family or his work place.

“He was so appreciative as he wasn’t ready to come out. He had a wife and children to protect.

“I understood his situation and we spent hours talking through it as he had no one else he could talk to about it. I understood. I too was once a professional who had to come out, so I knew from my own experience it is a very personal journey and not one size fits all.”

During Ben’s six years working the Fortitude Valley Division he’s been called to a number of incidents where an LGBTIQ person has been contemplating suicide.

“One of those in particular stands out to me. A young gay guy was standing on the edge of a bridge contemplating jumping off.

“He was distraught, trapped in an emotionally and physically abusive relationship.

“Having previously been through a similar relationship myself I understood what he was going through and the challenges he faced.

“I talked to him about domestic violence, the support that was available and how there was so much to look forward to in his life.

“After chatting for a while, he came back from the railing and I took him to speak to a mental health professional. A few days later I received an email from him letting me know things were looking up.”

It’s great to know that in 2019 when LGBTIQ community members think they have nowhere to turn, there is someone to talk to.

There are now LGBTI Liaison Coordinators in every police district in the state so wherever we live in Queensland we can access a dedicated officer who is determined to make a difference in their community.

Some facts re the acrimonious debate over Pride and Police