A South Australian council will replace its rainbow flag after a vandal painted it with a disgusting homophobic spray.

The flag was flying in the centre of the town of Mallala, 50 km from Adelaide, to coincide with SA’s “Pridevember”, run by the Feast Festival.

A local resident, known as Liam, earlier took a photo of the rainbow flag to proudly show his partner, he told ABC News.

However after finishing an overnight shift early on Wednesday morning, he returned to find the vandal had painted “F–k the f—-ts” across it.

Liam then took the rainbow flag down. He told the ABC the knowledge a local had written the hateful message in that time was a “really horrific gut-punching feeling”.

“I’d never been more angry and more saddened,” he said.

“The contrast, that was probably the worst thing for me, going from being filled with pride and reassurance [taking the photo] to feeling almost attacked as a member of the community.”

Liam said as a whole, the country community was very accepting.

“You really know your neighbours out there… You do feel supported by the community [and] feel like you’re a member of the community,” he said.

“People don’t look at the [rainbow flag] as an invasion of the community.

“It’s like the Adelaide Plains community saying, we see you, we accept you, we love you.

“But obviously there are naysayers out there who don’t see it as the same sort of symbol. It was frustrating to witness that.” 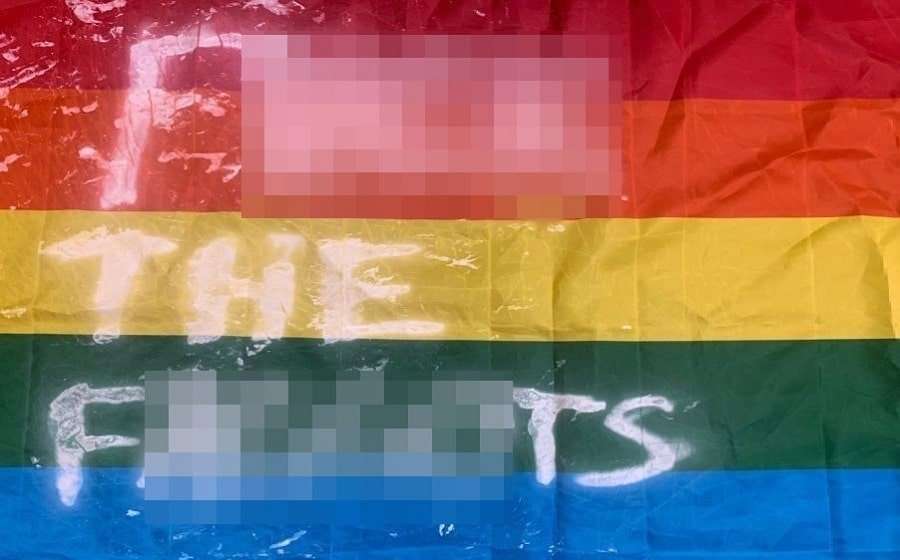 During the Feast Festival’s Pridevember this month, organisers want everyone to fly rainbow flags to support LGBTIQ+ communities.

Feast CEO Helen Sheldon said the vandalism unfairly reflected on the region. She said the council’s decision to fly the rainbow flag was “very important and positive”.

“[The vandalism] is a clear indication… there is still work to be done,” she told the ABC.

However Wasley described the new graffiti as “unprecedented and unacceptable”. He said the council and community must reject the “act of hate”.

“A replacement flag will be flown again [and] raised and lowered daily for the remainder of November,” he said.