Police are investigating after a man was caught spray-painting a homophobic message on a Sydney building, calling for violence against gay people.

Laura Hunter and April Long were travelling through the inner-city Sydney suburb of Alexandria on Sunday morning when they saw the man kneeling down and spray-painting the brick wall.

The pair confronted the alleged vandal about the threatening message, which reads “Bash a gay today”.

Ms Hunter took photos of the graffiti and the alleged perpetrator as he pulled his hat down and walked away, later sharing the photos on social media.

The man told the women he had been “robbed by a gay man once”, Ms Hunter told AAP.

“For people who think the plebiscite has solved everything in our country it has not,” Ms Long wrote on her Facebook page.

A NSW Police spokesperson said officers from Redfern Police Area Command were investigating the vandalism and called for anyone with more information to come forward. 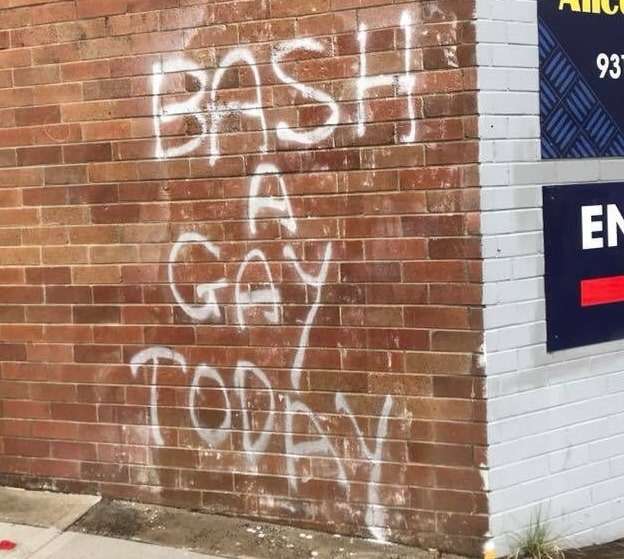 Last September, a similar message was spotted spray painted on an office building in the same suburb in the lead up to the same-sex marriage postal survey.

Scott McKeown and Bryce Kerr told the Inner West Courier at the time they’d returned to the suburb after getting married in New Zealand and “absolutely disgusted” to see the message.

“This sort of stuff hasn’t been around Sydney for decades,” McKeown said.

“It was a real throwback to the days when people thought it was great fun to bash up gays.

“It was a real shock to come home from our beautiful wedding in Queenstown and see this sort of thing so close to where we live.”

Last month, after Sydney man Ben Gittany copped a $14,000 fine and 300 hours of community service for vandalising a Sydney mural of late singer George Michael, which depicted him as a saint with a halo and holding a joint.

The Legal Service lodged a formal complaint under Queensland’s vilification laws with the Anti-Discrimination Commission Queensland.