The ABC alleged today that former soldier Heston Russell lied about donating the proceeds of an OnlyFans account to a veterans charity. Russell, who came out as gay after leaving the army, recently applied to register a political party.

Since leaving the defence force, Heston Russell became a prominent critic of war crime allegations. He also advocates for the mental health of veterans. Previously, he launched the fitness group Barry’s Bootcamp in Australia with former partner, Blake Bridges. Heston Russell appeared regularly on SkyNews and earlier this year promoted ‘veteran supporter pins’ on the Alan Jones Show. However, NSW Fair Trading later declared the sale of the pins an unauthorised fundraising appeal. Russell also faced legal action from the company that supplied the pins when he refused to pay the almost $50,000 bill.

Heston Russell standing up for Australia on Anzac Day 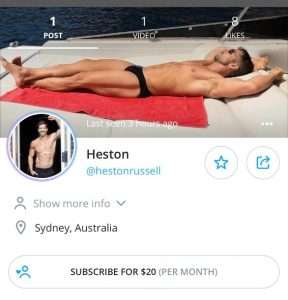 In 2020, Heston Russell launched an OnlyFans page. At the time, he worked for Swiss 8, a veteran-led mental health charity as the chief strategy and partnerships officer. The ABC says Russell told Swiss 8 he would raise money for the charity through sharing risqué but non-nude content.

However, he soon began sharing nude content, including a photo with a hardon listed for sale on Anzac Day 2020 for $US60. He also sold JO vids, promoting on his OnlyFans page that ‘all proceeds’ would go to charity.

Adrian Sutter, chief executive of Swiss 8 told the ABC that the charity was not in the business of selling pornography.

Sutter said the charity received no money from the venture until after terminating Russell’s employment.

“Whether or not he ever intended to donate that money I’m unsure — but he gave us his word that he would, and he didn’t.”

However, months later Russell made an online donation of $5,000 to the charity.