In the century when ‘the love that dare not speak its name’ became a euphemism for homosexuality, Queensland’s first premier and his longtime male companion enjoyed a companionship that not only spoke its name but bequeathed it to posterity. Robert Herbert and John Bramston combined their two surnames into one and named the home they made together Herston.

Their official biographies celebrate Robert Herbert and John Bramston as dutiful servants of the British Empire. Between them, they exerted enormous influence over the governance of Queensland during the formative years of the new colony.

Robert Herbert and John Bramston met at Oxford and took rooms together during their student years. After leaving college, they followed separate career paths while still sharing accommodation. When Herbert accepted employment in the Antipodes, he also arranged a job for Bramston in Brisbane, and they continued to cohabit.

Eventually, they bought land three miles out of town and built a house. Perhaps inspired by those romantic couples who celebrate their love with a monogram of their intertwined initials, Herbert and Bramston blended their surnames to concoct a name for their new home. ‘Herston’ later survived as the name of the suburb that grew up around their domicile.

Lies of omission and erasure

And there endeth the bullshit. Because while every word of the above is accurate, the accepted historical narrative of Queensland’s first Premier contains lies of both omission and erasure.

Writers either describe Herbert and Bramston’s relationship as close friendship or say we can’t be sure whether they were friends or lovers.

History is not a collection of proven facts. Otherwise, we could write a list of accepted dates and then be done with it.

History comprises stories of the past, usually recorded by the ruling classes of the time, and consequently interpreted by people who follow. It is a glorious amalgam of fact, assumption and deduction.

We accept, for example, that Henry VIII fathered Elizabeth I. People said so at the time, he was married to her mother, and if paintings depict her accurately, she inherited his hair and nose.

We possess no photographic evidence of sex between Henry VIII and Anne Boleyn and no eyewitness accounts. However, we surmise that it occurred from historical records and our knowledge of human behaviour.

But many heterosexual historians demand a far higher standard of proof for conjectured same-sex relationships.

Without photographic evidence or eyewitness accounts, they insist we read too much into what they believe are merely inordinately close but chaste friendships — a quaint form of companionship from bygone days that we more cynical and worldly mortals fail to properly comprehend.

That’s how historians manage to deny any sexual element to Abraham Lincoln’s sharing of a bed with Joshua Fry Speed for four years. Men often bunked together in those days, they say. For four years? Please!

Of course, we do today know of people who share a bed for years without contemplating sex. We call them married couples.

Within six months, Herbert won election as Queensland’s first Premier. His main political advantage was the favour of the Governor.

Although commonly judged a very able administrator, Herbert proved a poor politician. Lacking confidence as a speaker, he preferred executive fiat to the tedious chore of ushering legislation through the parliament.

The worst aspect of his premiership was his support for the extrajudicial murders of First Nations people by the Native Police. Some historians seek to excuse the genocide of Aboriginal people because ‘things were different in the old days’. However, for thousands of years, moral, religious and legal codes across the length and breadth of the planet identified murder as a crime.

A decade later, Governor Cairns, another gay politician, fell out of favour with the local establishment because of his opposition to the Native Police. Cairns believed in the equal treatment of all people, including First Nations people. The local political and business establishment regarded that as too radical by far.

In letters to his mother and sister, Herbert gushed about his life at Herston. He and Bramston hired staff to farm the 50 acres and made constant improvements to the property. They also indulged their love of ‘manly pursuits’  like boating, fishing, hunting and horse-racing.

According to Herbert’s letters, neither he nor Bramston enjoyed social events, and both remained immune to the charms of the local ‘belles’.

They later returned together to England. After almost twenty years together, they went their separate ways though remaining lifelong friends.

Herbert and Bramston both spent many years in the British Colonial Service. Each eventually earned a knighthood.

Herbert remained unmarried his entire life, while Bramston took a bride at the age of 40. No children resulted from the union.

Herbert explained his thoughts on marriage in a letter he wrote to his sister Janey from Brisbane in 1864.

“A man or woman should not if it can be helped exchange a serene and happy existence for a life entirely different, and possibly not suited to previous tastes and habits.” 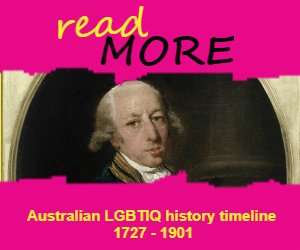