If you’re anything like me, then there’s nothing you like more than sitting down to a good, queer book that doesn’t kill our people at the end.

Unfortunately for you and me, the global publishing industry performs poorly in terms of pushing queer titles—either by ignoring our emotional responses, boxing titles into genres they don’t belong in, or underselling them as queer narratives and making them near impossible for us to find.

Anyone who’s hit Bookfest looking for a queer title knows exactly what I’m talking about.

But several Australian organisations are determined to curb this trend, with Get YA Words Out, The Digital Writers Festival, and our very own Brisbane Writers Festival ready to fight for us. These spaces acknowledge that Australia’s own publishing industry does a poor job of representing our queer titles in the global market, so they’ve taken on the responsibility by being as hungry to feature these titles as we are to find them.

With Brisbane Writers Festival (BWF) fast approaching, QNews Magazine and I would like to highlight this year’s queer author lineup and the titles they’re bringing with them.

Community, Gender, and Identity looks at the way literature explores queer identity, how our emotional responses are valued by the publishing industry, and the impact queer representation has on our development as queer individuals.

Convening on September 9 from 10am, this panel will be a must-see discussion for my fellow media nerds. We caught Jewish, non-binary author and activist Nevo Zisin to discuss the inner workings of their 2017 debut title Finding Nevo.

You might remember Nevo (pictured, below) from their role as host at this year’s Queen’s Ball, but you might not be aware of their work providing vital support to queer members of Australia’s Jewish community.

Finding Nevo, like most of Nevo’s writing, criticises the labelling of gender and sexuality from the perspective of someone who identifies as ‘none of the above’, with their writing leaving honest and compelling alternatives to ripen in your mind. But with the confidence, Nevo carries in their writing comes the emotional toll of being a rarely-heard voice.

“My writing process looks like what I imagine anxiety would if it had a physical form. I struggle a lot with perfectionism and Impostor Syndrome. So often it can take me a few weeks to even get something on the page. Deadlines really help me, even if they’re self-inflicted. I need the incentive to jerk me out of the freeze of anxiety.

“When it comes specifically to my book, it was pretty terrifying. First, I needed to find my voice and convince myself that my story was worth telling. I was lucky enough to be surrounded by people who helped me believe this.

“I was terrified of saying the wrong thing, offending people, or misrepresenting myself.

“When you’re working with the subjectivity of memory it can be a very delicate and potentially dangerous game. Not only did I need to remain truthful to the stories of my family, but also to myself, in all my different incarnations. That meant putting myself back into the headspace of who I used to be across many different stages of my life. It was really painful to try and remember things I’d rather forget.

“But I knew that getting that pain out into the world would make some people feel more supported, more real, and more seen. That was all that really mattered.”

“I think the book came at a really crucial time. The prevalence of transgender politics in the media has increased dramatically in the last few years. Now more than ever it is critical to be hearing trans people’s voices directly and not just how they are presented by others.

“The writing process was strenuous, emotionally and mentally exhausting, and at its worst downright re-traumatising. However, it was also cathartic, nostalgic, and beautiful.

“I had abandoned the old versions of myself a while ago, and this was a way to reconnect with them and fall in love with them for all that they were. Writing this book allowed me to look back on my entire life, put what I wanted onto pages, and then take a step back. The entire journey was like an intensive therapy session and through it I got a lot of answers I needed.”

Equally as fresh, rural Victorian teen Jay Carmichael debuted his first novel Ironbark back in April—joining Nevo in proving to Australian publishers that there was indeed a demand for queer stories.

Ironbark is a semi-autobiographical novel following Markus: a quiet teen coming to terms with his sexuality while dealing with the death of his best friend and the feelings of isolation felt by young queer folk living in small Australian towns.

Jay brings this perspective to Claire Christian’s Young People These Days (12.15pm on September 8): a panel discussing what it means to be both an emerging writer and a writer of young adult fiction—making this a must-see panel for young and enthusiastic readers.

Jay told QNews Magazine back in April about Ironbark’s conception, “When I first started writing I wrote about men and women and how in love they could be. I was in denial, and so it always felt wrong. Denial was for me a two-way street: I denied being gay because being gay was denied in the place I lived. There were no role models or rainbow stickers. Safe spaces did not exist. And if you didn’t play footy you were obviously a poof.”

“Which is why serious writing on my debut novel, Ironbark, only began when I moved to Melbourne for study. I met ‘city’ people who really did not care about who I was attracted to.

“This liberated me to be able to write the novel from a place of assessment. Like Ironbark’s main character, Markus, who found himself amid a stillness that followed once chaos had settled, when I moved to the city, all these feelings and thoughts began to surface.”

“I could have easily written creative non-fiction or penned a premature memoir of my time growing up as the only gay in the village (though I found out years after I left the area that there were at least two other young gay men who I went to school with but who, I suspect, saw how I was treated and, because they were ‘straight-acting’, chose to hide the queer part of themselves until it was safer to express it).

“One reason I did not write in a memoir or non-fiction is because, simply, when I first started writing Ironbark I was still not out to my family or friends. Writing in fiction meant the book wasn’t necessarily about me.”

“During the editing process, I was pushed—and rightly so—to expand on some of the material in order to more fully describe how Markus experienced his world. This often meant, for me, returning to memories and personal experiences I had tried to bury.”

“Writing Ironbark helped me work through how I had internalised my self-hatred and shame. It was paralysing and took a long time to write because for many years previous to putting pen to paper, I felt I didn’t control myself — people calling me names and touching me up had turned my thoughts and my body against me.

“Which is why, in the end, Ironbark is a reclamation: ‘This is who I am and this is how I have been made to feel.”

Doing their best to cover poetry during the week are Zenobia Frost, Rebecca Jessen, and Shastra Deo—author of The Agonist and recipient of the 2016 Thomas Shapcott Poetry Prize.

They’ll be panelling a discussion from 10am on the Sunday that discusses the diverse voices thriving among Brisbane’s poetry scene.

Shastra herself is currently completing her PhD in Creative Writing at the University of Queensland and told us of her writing process, “I wrote the majority of The Agonist as part of my honours dissertation, which meant that the collection as a whole was informed by my research question, ‘What happens to the self when the body is dismembered?’

“As the collection grew and evolved, I found myself coming back to the subjects that seem to recur in most of my writing: how memory is embodied and subsequently enacted through the body, how the physical world interacts with and is overlaid by what is unseen, and where we store our selfhood. 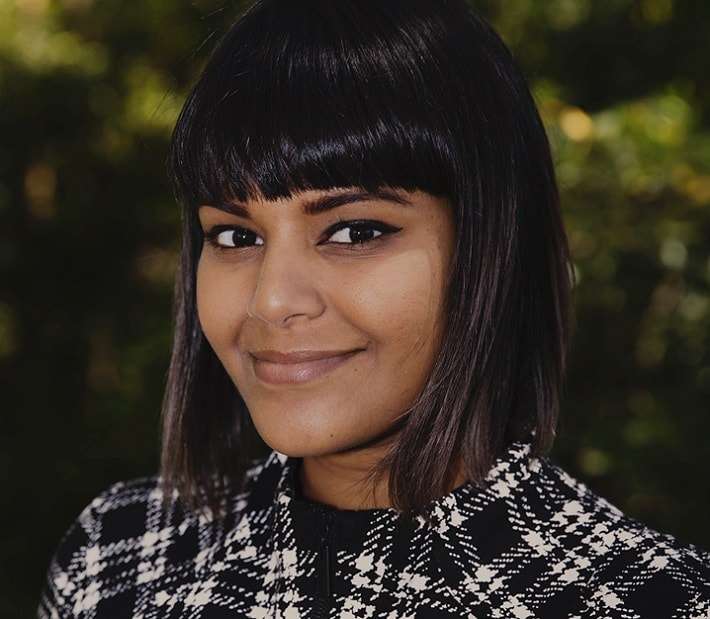 “The speakers (or selves) in my poems have distinct and discrete identities, and are far removed from my personal history— ghostly figures that haunt the textual bodies of the poems. My speakers are characters, and I take the same approach to them that I would if I were writing a short story. Even with short story characters, I rarely feel as though I’m creating or inventing them. For me, it’s almost always a process of discovery. A character or speaker worms their way into the brain.

“Perhaps they leap from the temple of the head, fully formed. More often, they’re half in shadow—all I know is that they’re a fisherman or a war veteran or a prophet.

“Then starts the research. I don’t rely on my own history, but I think you have to be prepared to dip into the well of memory and describe—in the way that only you can—the precise quality of the sunlight as it hit the water, or how the fish thrashed in your own father’s hands.

“Writing poetry, then, is for me a process of discovery and invention, of inducing hauntings—remembered or imagined. I conjure narratives and selves, and write the textual bodies that they could then inhabit. Sometimes it’s the other way around—I end up with a skeleton of a poem that’s missing a soul (for lack of a better word), and have to return to rewriting, remaking, remembering the poetic body.

“I treat my keyboard as if it were a planchette, and hope that I’ll be able to summon a talkative ghost.

“I’m sure there’s some rule against inviting ghosts into your own home, but I’ve done it: I write in bed, on the couch, and on the floor. No need to burn sage just yet. I read once that places aren’t haunted—people are haunted. I don’t think that’s true.

“Places and people are haunted, and that haunting is recursive. It bends back on itself. Haunting as event, motif, and methodology fascinates me, and is one of my main inspirations as a writer.”

Also on the festival fringe sits Alisha Jade: a local non-binary comic artist and convenor of the Banksia Project, which strives to raise the profiles of femme and female comic artists working in Australia’s comic industry.

They’ll be conducting workshops that show children how to produce minicomics of their own, as well as providing guests with insight into the skills they’ve learnt through their ten-year career. These sessions are part of BWF’s Word Play programming, however, meaning that sessions are strictly for school-aged attendees only.

Regardless, we encourage QNews Magazine readers to discover Alisha for themselves and celebrate everything they’re bringing to the world.

And that’s a wrap! You can check out BWF’s weekend program and purchase session tickets by visiting their website at bwf.org.au. As with every year, a temporary bookstore will be installed in the State Libraby of Queensland breezeway during the festival where you can purchase titles ahead of author signings. Do keep an eye on signing times, however, as authors aren’t always around for long.

The Brisbane Writers Festival runs from September 6 to 9. Jay Carmichael and Nevo Zisin will speak at the festival in the Community, Gender and Identity event on September 9, and Shastra Deo will take part in The Dark and the Light – Poet’s Session on September 9. For dates, times and tickets, visit the website here.

Elliot Page: Actor comes out as transgender in powerful message