Gold Coast-based soccer team the Mudgeeraba Wallabies will host the sport’s first Pride Round next week.

Next week, the Mudgeeraba Soccer Club’s men’s and women’s teams will face off against five other Gold Coast teams from June 6 to 11.

The club’s players and other teams will wear rainbow colours during the Pride Round matches at Sid Bigg Park to celebrate inclusion and diversity in sport.

The athletes want to show LGBTIQ+ players and spectators they’re welcome and accepted at their games.

The events are important as research has found around three quarters of LGBTIQ+ Australians don’t feel safe as spectators at sporting events.

President Jon Smith said Mudgeeraba was an inclusive club that welcomed people from all walks of life, and the Pride Round was a great example of this.

“Mudgeeraba is a club with a reputation as a safe, respectful and welcoming space for players and their families, and we’re keen to take the lead in this space,” Smith said.

“We hope that other clubs and communities will take on hosting their very own Pride Round and it continues to grow.”

After the final men’s game on the Saturday night (June 11), Mudgeeraba SC are planning a big Pride Party to celebrate.

The Pride Round on the Gold Coast is a first for Australian soccer, welcomed by Football Queensland. 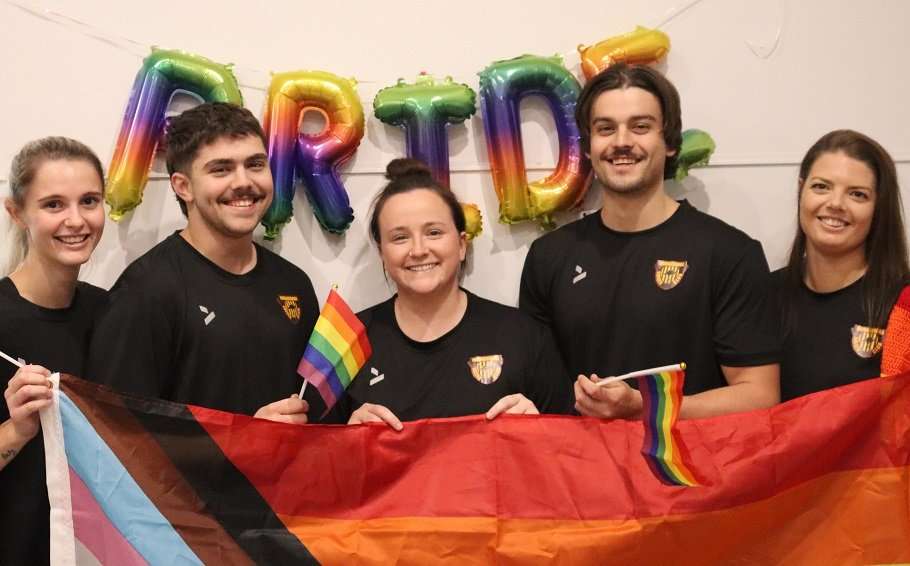 Then in February, Cavallo praised his club for hosting the A-League’s first Pride Game in his home state.

Pride Round aims to show sport is ‘safe, fun and welcoming’

National organisation Pride Cup has worked with the Queensland teams to organise the South Coast Soccer Pride Round.

Pride Cup CEO James Lolicato said the Pride Round event was an “exciting moment” for soccer in Queensland.

“Sport is a powerful vehicle for change. This event will have a ripple effect beyond the field and out into the wider community,” Lolicato said.

“Through running education, hosting Pride games and showcasing diversity, we can ensure LGBTIQ+ people are included and welcomed in our community sport clubs. For a long time, this hasn’t been the case.

“Only six per cent of young LGBTIQ+ people have participated in team sport because they don’t feel safe or welcome to.

“This is a huge opportunity to show LGBTI+ people that soccer can be a safe, fun, and welcoming place for all.”