Despite the earnest propaganda of monarchists, divine right has SFA to do with who gets to plonk their entitled arse on a throne. The ascension of a British monarch usually results from one of the three Fs. Some get there by virtue of a F***, many have to Fight for it and others are mere Flukes. Movies The Favourite and Mary Queen of Scots recently revealed some of the gay and lesbian history of the British royals William II and Richard I deserve mention in the English Gayme of Thrones?

At his death William bequeathed the throne of England to his son William Rufus, probably the first gay king among the Bastard’s descendants.

William Rufus and the Gayme of Thrones

Rufus, otherwise William II, indirectly ended up King of England because he once pissed on his older brother Robert’s head from a balcony.  Strange circumstance often dictates events in the Gayme of Thrones. The incident exacerbated tensions between Robert and the Bastard and led to outright warfare between father and son.

Warfare was no big deal for the Bastard who never met someone he wouldn’t battle. He fought all his life, even until the year before his death squabbling with some Danish Cnut. To be precise, King Cnut IV, another foreigner with designs on the English throne.

On William’s demise in France, the ‘sort of’ reconciled Robert inherited the duchy of Normandy while William scored the biggy — England.

Henry, a younger brother, received bucketloads of cash but no land or throne.

Willie II scampered across the channel for Westminster Abbey even before the funeral of his corpulent father. It’s often first in, best dressed in the Gayme of Thrones.   It was a lucky move. Monks crowbarred the conqueror’s corpse into a too small tomb, rupturing the body and sending mourners fleeing the right royal stench. 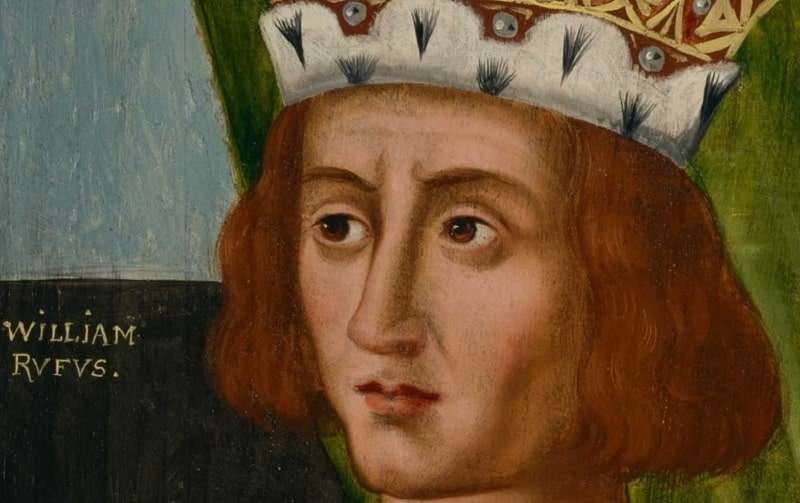 William II was by all accounts a ruthless and unpopular king, but hey, while monarchy back then entailed the same pageantry and pomp we see today, it was not yet a popularity contest.

A royal visit in medieval times rarely involved opening a flower show, cutting a ribbon for a new hospital, or showing off the latest princess bride. It was more commonly a passing parade of rape, pillage and plunder.

William II attracted scandal by surrounding himself with good-looking young long-haired male courtiers notable for their fashionable clothing and good taste in shoes. Of course, the English never appreciated quality cutting edge footwear, even to this day preferring a nice pair of sandals teamed with long socks.

A Benedictine monk who chronicled medieval times described the court of William II.

“The effeminate dominated everywhere, and revelled without restraint, while filthy catamites, fit only to perish in the flames, shamelessly abounded themselves to the foulest practices of Sodom.”

Concerned about the kingdom’s reputation, the Archbishop of Canterbury asked Rufus to outlaw “the most wicked crime of sodomy”.  The unconcerned king told him to go f… to forget about it.

William II died at around age 44 when a supposedly stray arrow found its way into his breast during a day out hunting. Younger brother Henry, he of the bucketloads of cash, abandoned his brother’s body and raced off to secure the royal treasury and jump on the throne himself.

Henry was next in line as William II never married, took a mistress or sired children. This at a time when the main duty of a king after securing the throne was to guarantee the dynasty by the production of an heir and a spare.

Some say history is written by the victors but equally it is sometimes written by boring old farts who think oral sex is talking about it.

Their scribbled annals of bygone days presume that all participants were straight. While requiring no evidence of heterosexuality, they only attribute homosexuality if provided with a detailed statement by Willie Shakespeare, written and signed in blood by his own hand.

Scholars who, without hesitation, trust statements that William the Conqueror, despite all his other vices, never played up on his wife, quibble over references to William Rufus and homosexuality.

They prefer to interpret mentions of sodomy as maybe relating to the despoiling of an innocent milkmaid or even the bestial buggery of a complicit cow, rather than acknowledge the bleeding obvious — that Rufus was delighting the bottoms of hot twink courtiers with his regal sceptre.

One historian speculated William II neither married nor had offspring because, “he may have taken a vow of chastity or celibacy.”

Lordy, lordy me! Ask the Vatican how those vows of celibacy work out.

Another mused that perhaps His Majesty, overworked from plunder and pillage, never found time for horizontal folk dancing. Sweetheart! If he found time for hunting, he had time for sundry other recreational pursuits.

The same annalists probably believe Liberace was just a little bit flamboyant and too busy with piano practice to meet eligible brides.

Richard the Lionheart and the Gayme of Thrones

One of England’s most celebrated kings, Richard I is famous for his bravery. His subjects honoured his adventurous and poetic nature and startling good looks. A statue of him stands outside the Houses of Parliament at London’s Palace of Westminster.

Although born in England, Richard spent most of his adult life either in France or off fighting crusades.

Rather than administer England himself he sold that right to the highest bidders to raise funds for his crusades, reputedly saying, “I would have sold London if I could find a buyer.”

Roger of Hoveden worked for Richard’s father King Henry II and later accompanied Richard on a crusade. He authored a respected and well-informed history of England including accounts of his dealings with Henry and Richard.

He lived “with Philip, the King of France… they ate every day at the same table and from the same dish, and at night their beds did not separate them. And the king of France loved him as his own soul; and they loved each other so much that the king of England was absolutely astonished at the passionate love between them and marvelled at it.”

Yet, believe it or not, heterosexist historians — let’s call them hetstorians — dispute any presumption of homosexuality. 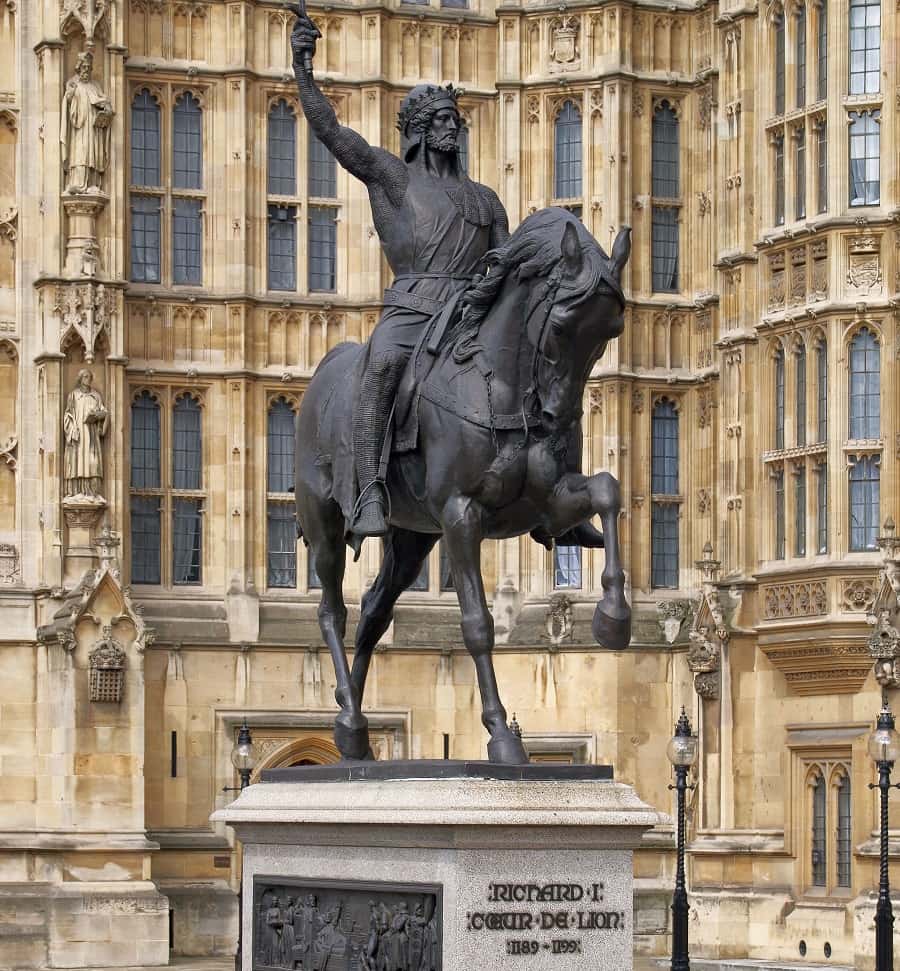 To hetstorians, Philip II and Richard were just good mates… yeah, sure, they popped tasty morsels into each other’s gobs, but in a purely normal blokey sort of way. Nothing to see here. Move along. No reach-arounds in the Parisian palace.

One genius opines, “put into the context of the time, sharing a bed wasn’t a big deal. Certainly, among lower classes, bed sharing among families happened all the time — it was a way to keep warm, or they might not have been able to afford more than one bed.”

Sacré dieu! as King Philip may have said, or, in modern parlance, FFS!

Couldn’t afford more than one bed?

The dude owned a f***ing country! And not just any country. He owned France, then the most prosperous country in Europe.

The country that invented the ‘boudoir’ was his personal possession.

Philip could afford as many beds as his heart desired.

On cold nights, he had sufficient funds to enjoy a warming fire in a marble fireplace.

And — you’ll have to trust me on this. Many kings at the time furnished their bedchambers with warming devices known as blankets. No need to pile English princes on your bed to stop from shivering.

Philip and Richard later combined in a crusade to wrest Jerusalem from the powerful Saracen Sultan Saladin. However, they eventually fell out and went to war against each other in what is sometimes depicted as a lover’s quarrel. No love lost in a Gayme of Thrones.

During the crusade Richard twice made public penance for his sins, buggery apparently among them. Furthermore, there are historical references to a young knight named Raife de Clermont who the Lionheart rescued from the Saracens and according to sources, had an affair with.

On the flip side, Richard did marry, though at the relatively late age of 33. He spent very little time with his wife. They had no children, although he fathered an illegitimate son named Philip of Cognac by an unidentified mother.

Did the Lionheart name his son for his former lover?

Additionally, there are references to Richard raping women during the crusades so we can assume bisexuality.

It would be nice to record that gay kings were lovely people. Unfortunately, they were just as nice as heterosexual kings, which is to say, not at all. They were, for the most part, entitled murderous bastards.

However, hetstorians wish to hear nothing against their heroes. Over centuries, they constructed a narrative of white heterosexual male supremacy and are unwilling to let that go easily.

One online commentator gives the game away in an angry rant.  He railed against the thought that two passionately in love men who shared a bed were necessarily gay.

“We tend to try and convince ourselves that almost everyone in history was a puffter. It’s a political agenda as much as anything; if gays were so predominant in the past then we should embrace homosexuality today. There is also an attempt to sneer at our national heroes here. What better way to burst a nationalist/heterosexual bubble than to convince us everyone from Richard I, Shakespeare, Douglas Haig and so on were shirt lifters.”

The homophobic slurs employed by this gentleman betray his agenda. Ignore historical evidence and maintain the traditional erasure of LGBTIQ people from history in order to delegitimise their existence today.

To this fool and his ilk, I say — Silly man. We saw you coming. We’ve known you all our lives.

There is an argument — a tired argument — that gays never existed in olden days. Apparently, they are a purely modern construct somehow devised to adorn the designation homosexual, coined by Karl-Maria Kertbeny in 1868.

In 1799 the word platypus did not exist. Then European scientists identified the Ornithorhynchus anatinus and devised a name. But the animal came before the name. The platypus inhabited Australian waterways for millions of years despite a general ignorance of their existence.

Like the homosexual, when first identified, some denied the reality of the platypus. The egg-laying, duck-billed, beaver-tailed, otter-footed mammal was outside their realm of existence.

“It’s an elaborate hoax,” they said.

The platypus was not a hoax. Nor is the existence of LGBTIQ people throughout history, whether or not appropriate nomenclature existed to give them identity.

A rose by any other name, or none, would smell as sweet.

In Part Two of Gayme of Thrones we examine more gay British monarchs.