Right-wing grifter Katie Hopkins being deported ‘as soon as possible’

Once it was enough to wave a rainbow flag to celebrate Pride. Now however, marketers who once ignored LGBTIQ communities, can’t wait to throw pride-themed merch at us.  From Listerine mouthwash to an LGBT sandwich to IKEA carry bags and butt plugs, retailers are painting their products rainbow.

Some do it to show support and fundraise for charity. Others do it purely for profit. No doubt, they all make a pink buck or two along the way.

The pride-themed snack raised funds for a homeless LGBT+ youth charity, a worthwhile cause.

Nevertheless, some still saw the promotion as a cynical attempt to cash in on LGBTIQ culture, symbolism and the pink dollar.

IKEA followed with their rainbow carry bag. Too their credit, IKEA is donating 100 percent of their profit to the Human Rights Campaign Foundation. The US based HRCF works to achieve equality for individuals within the LGBT+ communities.

At IKEA, we believe #equality is a fundamental human right and that all homes are created equal. To celebrate #Pride, we’re offering a limited edition of our KVANTING bag, with all proceeds going to @HRC programs that support LGBT+ youth and families. https://t.co/scvPdMgv0O pic.twitter.com/Tn3HndklEl

Johnson & Johnson are the latest to join the Pride party. For American Pride month this June they  introduced a rainbow coloured Listerine bottle as part of their Care with Pride range.

at last i can wash my gay hair and rinse my gay mouth while feeling truly seen pic.twitter.com/QhQuwiaf7c

The range caused a lot of comment across social media.

pride listerine to wash the mediocre dick out of my mouth pic.twitter.com/Q6HsI0ktBn

Finally, for those not satisfied with the LGBT sandwich, the IKEA carry bag or the Pride Listerine mouthwash, Etsy has a listing for a rainbow fox fur butt plug. 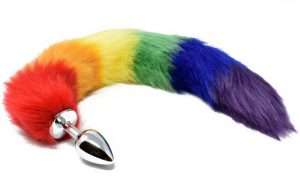 Neither the sandwich nor the mouthwash are available in Australia. However both the IKEA bag and the rainbow butt plug are available online.

Everything old is new again: Spanish Flu vs COVID Pandemic

Rainbow Chess at Rainbow Beach, home of the Rainbow Stairway