Australia recently (July 2018) accepted 50 mainly Ugandan LGBTIQ refugees from Kenya under the Refugee Visa (subclass 200) for people fleeing persecution in their home country. But why is Uganda such a dangerous country for its LGBTIQ communities?

Worse still, in recent years the country considered the death penalty for homosexuals. Also, LGBTIQ Ugandans are at constant risk of violence and extrajudicial killings.

In March 2009, three American evangelical Christians held a workshop on ‘the gay agenda’ in Kampala, Uganda. Scott Lively, author of anti-gay books, Caleb Lee Brundidge, a ‘former’ gay man who conducts homosexuality healing sessions, and Don Schmierer from Exodus International hosted thousands of police, teachers, clergy and politicians at the conference. Before the event, Lively promoted it as ‘a nuclear bomb against the gay agenda in Uganda’.

The following month, the Ugandan Parliament debated introducing the death penalty for gay sex acts. Subsequently, a local paper printed a list of the country’s alleged top 100 gays and lesbians. It included photos of those people and their addresses. A banner on the article screamed ‘Hang Them’.

The article included the name, photo, and address of Uganda’s most prominent gay activist, David Kato (pictured above). Soon after, David was dead, bludgeoned to death with a hammer.

While the Anti-Homosexuality Bill never passed parliament, LGBTIQ Ugandans still live in daily fear of violence. In August 2016, police disrupted an attempted Pride event. They bashed and imprisoned attendees, one of whom subsequently died.

Many LGBTIQ Ugandans flee to the comparative safety of Kenya’s Kakuma UNHCR refugee camp. There, they are still subject to persecution. Many of the camp’s 185,000 plus residents originate from countries with virulently homophobic cultures.

Despite the oppression, 180 brave LGBTIQ refugees defied threats and actual violence to attend Pride events in the camp in June this year (2018).

Continuing a glimmer of hope from the Kakuma Pride Parade: pic.twitter.com/Yt6ulue7p7

In the Kenyan capital, Nairobi, LGBTIQ refugees receive assistance from a discreet charity funded by the Elton John AIDS Foundation. While conditions are more relaxed in Kenya for LGBTIQ people, homosexual acts are nevertheless illegal. Discrimination and prejudice are rife, and refugees suffer more than others.

Grindr users in Nairobi automatically assume Ugandan members are sex workers, often for good reason. Many have no other means of making a living.

An elderly white missionary holds church services specifically for gay refugees but seems only able to provide for his parishioner’s spiritual salvation. A Kenyan gay man who attended a service told QNews he cried to witness the hopelessness of the refugee’s situation.

African dictators looking for minorities to demonise have long decried homosexuality as a colonial import. Yoweri Museveni, President of Uganda since 1986, originally took the more learned approach that homosexuality always existed in Africa, just like everywhere else. However, the anti-LGBTIQ hysteria earlier this decade provided the autocratic president an opportunity to harvest votes. He then joined with Zimbabwe’s Mugabe in claiming homosexuality as un-African.

What the European colonisers actually imposed on Africa was not homosexuality, but homophobia. They introduced laws to criminalise previously acceptable behaviour. Researchers document historical same-sex relationships in fifty societies across every region of the continent. Also, rock paintings in Zimbabwe dating back 2000 years depict same-sex sexual relations.

Uganda itself was home to one of Africa’s most famous gay men. Today’s Uganda incorporates the hereditary kingdom of Buganda. Buganda was feudal. Local chiefs ran their areas and answered to the absolute ruler, the Kabaka.

During the reign of Kabaka Muteesa I from the mid-1850s, he allowed Church of England and Catholic missionaries into Buganda to offset the influence of Muslims. Muteesa played the three religions off against each other.

When he died in 1884, a council of state chose the most capable prince to succeed, Muteesa’s 18th son, 16-year-old Mwanga II.

Suspicious of the missionaries, Mwanga noticed that in other countries the missionaries arrived first, followed by diplomats, merchants and ‘advisers’, and finally, soldiers. He predicted that when he died, Europeans would take over his kingdom. They didn’t wait that long…

The ‘Scramble for Africa’ was on as European empires raced to seize as much of the continent as they could. The British wanted Buganda as a bulwark against German and Arab expansion, a base for the ivory trade, and a stop-over port for ships on the East India run.

The missionaries focused their efforts on Mwanga’s 500 pages. The pages were young men from noble families sent to the royal court by local chiefs to serve the Kabaka and learn governance. They ranged in age from 14 to 25.

Often those young men returned home as leaders of the future when their apprenticeship as pages finished. The older experienced pages were important to the governance of the kingdom.

The missionaries recognised the crucial role played by the pages. They realised if they converted a page he could both spy on, and influence, the government in their interest.

But the pages were more than an important element of the kingdom’s ruling apparatus for Mwanga. He regarded them as his personal harem, as did other Kabakas before him, and no different to European monarchs who chose their paramours – male or female, either or both – from among the courtiers in their palaces. The missionaries saw an opportunity to undermine the popular and astute Kabaka – attack him on his sexuality.

They convinced the pages they would burn for all eternity if they continued to indulge the Kabaka. About a hundred pages converted to Christianity. They refused Mwanga’s sexual advances and shared state secrets with the missionaries.

Mwanga gave the converts a choice. Loyalty to the kingdom (him), or their new religion. Those who chose to swear loyalty to him would live. About 45 chose death. Sadly, some of the Catholic pages were burned alive. After the executions, the missionaries whipped up trouble based on Mwanga’s cruelty and sexual deviance. Eventually, their exertions saw Mwanga deposed. The British then annexed his kingdom.

Using sexual deviance as an excuse to impose colonial rule was not without precedent. Spain’s Balboa fed 40 transgender ‘sodomites’ to his dogs after conquering present-day Panama in the 1500s.

The missionaries and colonisers, in their quest for Mwanga’s land, portrayed the Kabaka as a degenerate paedophile. They, of course, ignored that most of the pages were his age or older. Nor were the young men actually executed for refusing sex. They were executed for treason, for spying on their king for foreigners.

The European monarchs who vilified Mwanga (pictured below, right) as a savage black heathen imposed the same penalty any of their own subjects who betrayed them. Years later, in 1916, the British hung Sir Roger Casement, an Irish nationalist, for high treason. They also vilified Casement (pictured below, left) for his homosexuality. 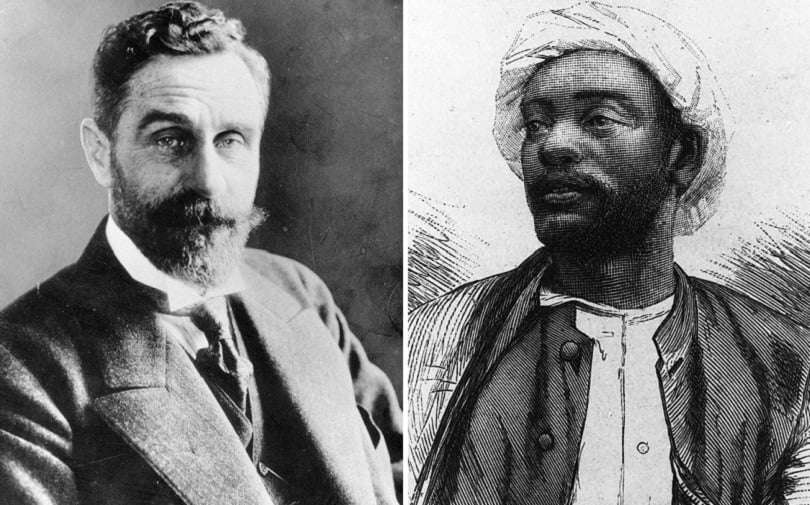 Indeed the same missionaries who attacked Mwanga for those hundred deaths never said a word when his father killed a thousand Muslims. They also consented to their own soldiers killing thousands of Bugandans who resisted the European takeover.

With mission accomplished and East Africa divided between European monarchs, the churches turned the murdered men into martyrs. They now claim the execution of the Bugandan pages as the birth of Christianity in Africa.

The British exiled Mwanga to the Seychelles and ruled the territory until Ugandan independence in 1962. Mwanga died in exile in Seychelles in 1903.

Furthermore, he doesn’t think anyone should promote homosexuality as a good thing. However, nor does he approve of their killing or persecution.

The reluctance of western aid donors to fund a regime that persecutes its own citizens possibly played a role in his change of heart.

Try telling Museveni’s LGBTIQ countrymen who still flee the land of their birth in fear of their lives, that his backdown makes the slightest difference to the oppression they suffer.