The New York Times best seller Red, White & Royal Blue is set for a small screen adaptation and the first cast members have been announced.

Red, White & Royal Blue is being created for Amazon Prime and is being filmed in the UK.

When it was released in 2019 Red, White & Royal Blue became an instant best seller.

Walking the walls of the white house, Alex Claremont-Diaz is the son of America’s first female president. Alex is a confident LatinX youth with divorced parents.

On the other side of the world Henry is an English prince who doesn’t quite know who he is.

The two youths have an unspoken rivalry that comes to head very publicly at a royal wedding.

Forced by their respective parents to repair their public image the two find themselves spending much more time together than they had ever planned.

What began as a rivalry soon becomes a romance that neither of them can control.

It’s a cute, captivating and heartwarming modern queer love story and now Amazon Prime have announced it will be produced exclusively for their streaming service.

While not many details of the production have been released yet the two lead actors have been announced.

And they are the perfect fit for Red, White & Royal Blue.

Nicholas Galitzine has been announced to play the role of handsome and affable prince Henry.

Many would be familiar with Nicholas from his role in the 2021 adaptation of Cinderella as Prince Charming.

However he is also known for his role in the stunning queer film Handsome Devil.

Nicholas will be the perfect prince Henry.

Meanwhile on the other side of the world Taylor Zakhar Perez will be playing the role of Alex Claremont-Diaz.

Taylor is very well known and loved for a very different reason lately.

Starring in the hit show Minx on Stan, Taylor has been baring it all with full front nudity that is getting plenty of attention.

Together the two of them will be a stunning duo as they bring this modern gay love story to life.

Whilst no release date has been set the film is set to start filming in the UK this month. 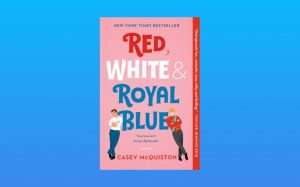