RuPaul and Michelle Visage announce ‘RuPaul’s Drag Race Down Under’

A global network of ‘baiters’, including Australians, conducts an illegal trade in explicit private hookup pics. Members of the informal network solicit images and videos under the pretence of hooking up. They then share, trade, and sell the stolen content. Much of it also ends up published on the net.

Soon: How easily scammers discern your real identity from your private images and profiles and ALSO how you can stop them.

Plus: The global market for stolen adult cam footage and Only Fans content.

Baiters also search out the real identities and other personal details of victims, leading sometimes to harassment and even extortion.

Some make a profession of baiting. ‘Clients’ who wish to see nude photos — or more — of specific individuals pay baiters to obtain such. Some target gay men, while specialists, known as ‘straight-baiters’, use a female profile to solicit images from heterosexual men.

Network members operate openly on large internet forums and sell files on platforms like Twitter and in Telegram, Kik and Discord groups. They use file storage services like Dropbox to transfer large files. 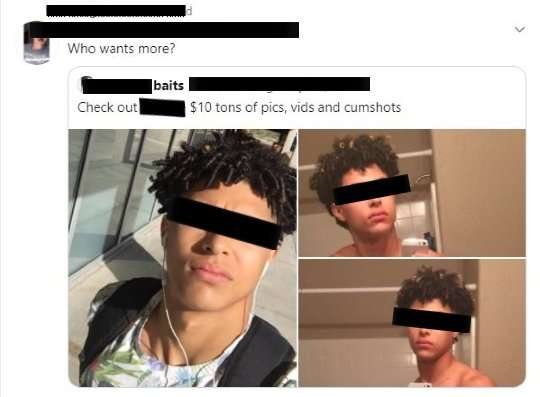 Bait files of either male or female subjects consist of a broad range of videos and images.

Some also include forgeries of driving licences, passports and other identification documents.

Last but not least, purchasers receive instruction on catfishing techniques.

The baiter needs their victim to believe they are speaking with a real person — in real-time. To that end, baiters learn how to make a pre-recorded video seem like a live inter-action via Snapchat. QNews followed an online trail where a forum member posted a link to a nude video commissioned from a straight-baiter and then offered for sale on Twitter. The straight-baiter obtained the video by posing as a woman using a bait-girl file. Another post then requested assistance in identifying the victim. By studying visual clues in the video, others identified the person as a young social media personality. His name, place of residence and links to his social media remain online.

Internet forums where baiters meet and organise claim to operate legally. Terms and conditions forbid touting for, sharing or selling bait images. Content that can identify a person is also explicitly disallowed.

However, the owners and administrators ignore daily posts openly touting for baits or offering them. Numerous posts also identify the people in posted images and videos obtained by catfishing. Older members openly advise newcomers to confine discussions about trade to private messages. The forums also allow members to post baited images and videos. While they do not directly sell that content themselves, the forums do profit from it. They restrict member-posted content so that only paid members can view it, thereby increasing their subscriptions.

The forums only remove content when they receive DMCA takedown notices or advice that an image shows an underage person.