Advocacy group ILGA-Europe has ranked the most and least LGBTIQ-friendly countries in Europe in its annual Rainbow Europe Country Ranking.

The yearly list, backed by the European Union, ranks 49 European countries from most to least LGBTQ-friendly. Each country’s ranking is based on how the laws and policies of each country affect the lives of LGBTQ people.

ILGA-Europe uses a number of indicators, including anti-discrimination policies, gender recognition and hate speech laws, as well as asylum rights to devise the list.

According to the Rainbow Map 2020, the most LGBTIQ-friendly countries are:

Meanwhile, the 10 least LGBTIQ-friendly countries in Europe are: 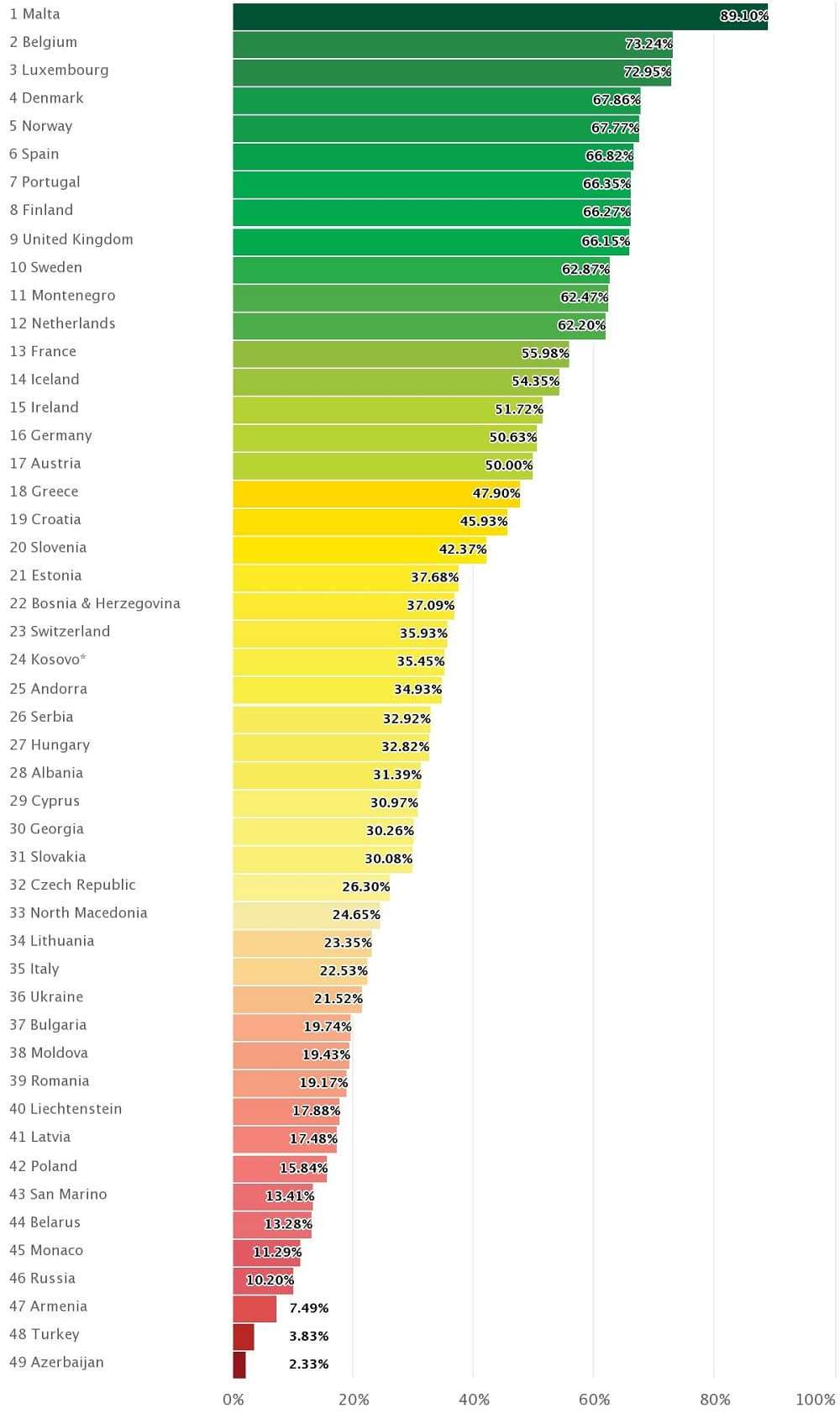 This year, there was sadly no positive change in 49% of countries, ILGA-Europe explained.

Additionally, for the second year in a row, countries moved backwards on the group’s list as existing protections were eroded.

Hungary, Azerbaijan, Serbia, and the UK all dropped due to rule changes that make it harder for people to correct their name and gender markers in official documents.

Moreover, Poland has also targeted LGBTIQ rights advocates and in Turkey, leaders have falsely labelled LGBTIQ people the source of the coronavirus.

ILGA-Europe warned some European governments are using the COVID-19 pandemic “as an excuse to advance their agendas to curtail human rights.”

As a result, the group’s executive director Evelyne Paradis said the 2020 findings are “a make-or-break moment for LGBTI equality” in Europe.

“Each year, more and more countries, including champions of LGBTI equality, continue to fall behind in their commitments to equality for LGBTI people,” she said.

Ms Paradis said, “History shows that those who are vulnerable before a crisis only become more vulnerable after a crisis.

“We have every reason to worry that political complacency, increased repression and also socio-economic hardship will create a perfect storm for many LGBTI people in Europe in the next few years.

“Laws and policies are often the last lines of defence for LGBTI communities as other marginalised groups.

“It’s never been more important that governments enshrine the protection of LGBTI people into law and take concrete measures to make sure that they can live as who they are in societies that are just, equal and fair.”

On this day December 20: Frank Kameny fired and fired up