In an era famous for prudery, Eugen Sandow became a wealthy and respected international celebrity for his all-but-nude stage performances and as a nude male pinup with only a figleaf to protect his modesty. There’s plenty of evidence to suggest the renowned bodybuilder was also bisexual.

Yes, there is a full-frontal nude photograph. But you’ll need to click at the end of the article to see that. The choice is yours — read or scroll.

Strongmen existed long before Eugen Sandow became an international celebrity for his spectacular musculature. But Sandow brought something new to the muscular male body — muscle by design. He measured classical statues in museums and built his body to replicate their dimensions thus becoming the Father of Modern Bodybuilding.

The strongman left his native Prussia at 18 to avoid military service. He travelled Europe as a circus athlete and also earned money modelling nude for artists. In 1888, he visited Venice and was saved from penury when — in a lucky coincidence — an American artist noticed him swimming and employed him as a model.

“I had become the particular attraction for a gentleman sauntering by. As I apologized in passing him, he stopped to compliment me upon what he was pleased to term my ‘perfect physique and beauty of form’. That casual critic proved to be none other than Aubrey Hunt, the famous artist, with whom I afterwards became on terms of close friendship, and to whom I had the pleasure of posing in the character of a Roman gladiator.”

The pair met at Lido Beach, a gay cruising spot, then and now.

The following year, Eugen travelled to London for a strongman competition, which he won. Although still performing his strongmen act, Eugen Sandow now capitalised on his new fame to become the OG nude male pinup. He found a ready market for the photos which showed him totally nude but for a figleaf.

Endless speculation ensued among Victorian aficionados of nude male photography. How did he attach the fig leaf? Held by invisible thread encircling his waist? Or perhaps glued or tied directly to his penis? Who knew?

Click here for one of the famous figleaf poses. (No! This isn’t the full-frontal. Not yet. Keep your pants on.)

In 1893, Eugen Sandow sailed to the US with his constant companion, the pianist Martinus Sieveking. The pair met when Eugen was 19 and Martinus played accompaniment during Eugen’s shows. New York World reported on their living arrangements.

“Sandow is living now at 210 West Thirty-eighth Street. With him, there lives a friend, Mr Martinus Sieveking, who is a very able pianist.

“Mr Sieveking is a Dutchman. His musical compositions have already attracted considerable attention in London, and he is an unusually brilliant artist. He and Sandow are bosom friends. He thinks that Sandow is a truly original Hercules and that no one has ever lived to be compared to him. Sandow thinks that Mr Sieveking is the greatest pianist in the world and that he is going to be greater.

“It is pleasant to see them together. Mr Sieveking, who is a very earnest musician, practices from seven to eight hours a day on a big three-legged piano. He is decidedly in earnest. He practices in very hot weather, stripped to the waist. While he plays Sandow sits beside him on a chair listening to the music and working his muscles. He is fond of the music and Sieveking likes to see Sandow’s muscles work. Both enjoy themselves and neither loses any time.”

Eugen Sandow did not enjoy instant success in America. Not until he teamed up with the famous showman Florenz Ziegfeld. Ziegfeld took him out of the full body leotard and dressed him in skimpy skin-tight satin shorts. Strongman feats were replaced with the muscle posing routine familiar to anyone who ever watched a modern bodybuilding competition.

After the show, audience members could, for a fee, join Eugen in his dressing room and feel his muscles!

Soon after Sandow returned to London to marry the daughter of a photographer he sometimes posed for. He and Martinus then went their separate ways. Martinus also took a wife but the marriage didn’t last.

However, Eugen’s marriage endured until his death and produced two daughters. But he and his wife spent a lot of time apart. Eugen travelled the world, performing, posing, and offering his services for personal training and as an institutional fitness expert. Newspaper photographs of his Australian tour show him giving fitness lessons to police and at a boy’s institute.

After his death, Eugen’s widow and daughters allegedly burned his private letters and diaries. That, of course, led people to speculate about what the documents contained.

Even during the bodybuilder’s life, some speculated on his sexuality. A cabaret skit satirising Sandow portrayed him as a statue in a park, naked but for the famous figleaf.  A group of pretty young women pass the statue which, typical of statues, just stands there — inanimate and unmoved. But when a sailor passed by, the figleaf stirs and then rises proudly to an erect state.

But Sandow was also comfortable posing without the figleaf. As promised above, just click on the link beneath this photo. 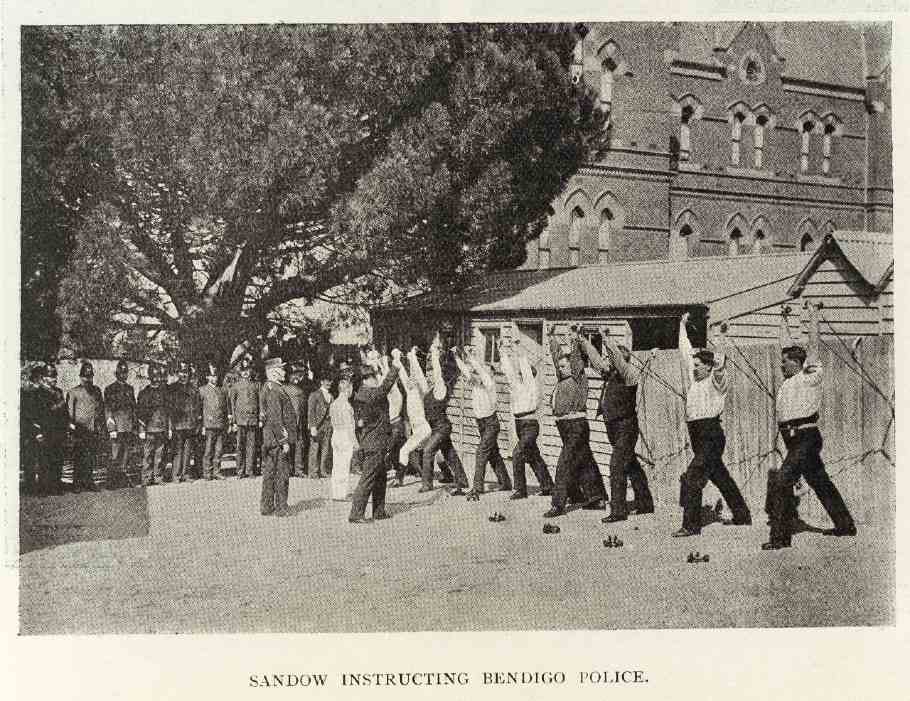 NSFW: Click here for a full-frontal nude photo of Eugene Sandow holding a pose so craftsmen can mould a cast of his body for use as a model by sculptors and artists.

On this day: Elizabeth was King: now James is Queen

On this day: Raymond Radiguet, dont call me Bébé

On this day May 8: Red Cross founder & 1st Nobel winner