The Brisbane Queer Film Festival is returning next month with a diverse selection of comedies, documentaries and dramas on offer.

From March 8, some of the best queer films from Australia and around the world will screen at the festival’s home at New Farm Cinemas in Brisbane.

“The theme this year – ‘We’re all the same in the dark’ – highlights the power of films to create a collective experience among the audience in the darkness of cinema,” organisers said.

“Stripping back our labels, inhibitions, judgements and stigma, to be on a human level, together.

“This marks the festival’s nineteenth year and fittingly its second year of independence. The festival is run by volunteers from the community, and we rely on sponsorship and funding from grants to produce the festival.”

This year’s BQFF lineup boasts everything from international flicks to documentaries to a collection of queer shorts.

The festival will celebrate its opening night gala on March 9 with a screening of US high school comedy Freak Show.

And this year the festival will also head to the Institute of Modern Art on March 8 for a free screening of some experimental queer classics, in conjunction with the Queensland Film Festival.

See eight of the highlights at BQFF 2018 below:

Everyone deserves a great love story. But for seventeen-year old Simon Spier it’s a little more complicated: he’s yet to tell his family or friends he’s gay and he doesn’t actually know the identity of the anonymous classmate he’s fallen for online. Resolving both issues proves hilarious, terrifying and life-changing. Love, Simon is a funny and heartfelt coming-of-age story about the thrilling ride of finding yourself and falling in love. The movie is based on the novel Simon vs. the Homo Sapiens Agenda by Becky Albertalli.

Freak Show stars Alex Lawther (Netflix’s The End of The Fxxxing World, Black Mirror), as Billy Bloom, our “freak reclaiming” hero, is faced with his fabulous mother (the divine Bette Midler) having to leave Billy with his straight-laced father. He quickly discovers that he’s like a diva-out-of-water at his new ultra-conservative high school, and undaunted by the bullies who don’t understand him, the fearless Billy sets out to make a big statement in his own inimitable way. Oh and with a cameo from the inimitable Laverne Cox (Orange Is the New Black). Based on the novel by James St. James.

One of the festival’s collection of Queer Shorts, Fez is a high energy spectacle celebrating Samoan-Australian entertainer Fez Faanana (pictured, below) and his trailblazing artistic journey from growing up in small town Ipswich, Queensland to representing Australia on the world stage in dazzling drag, with the Brisbane-based burlesque company “Briefs Factory” he co-founded. 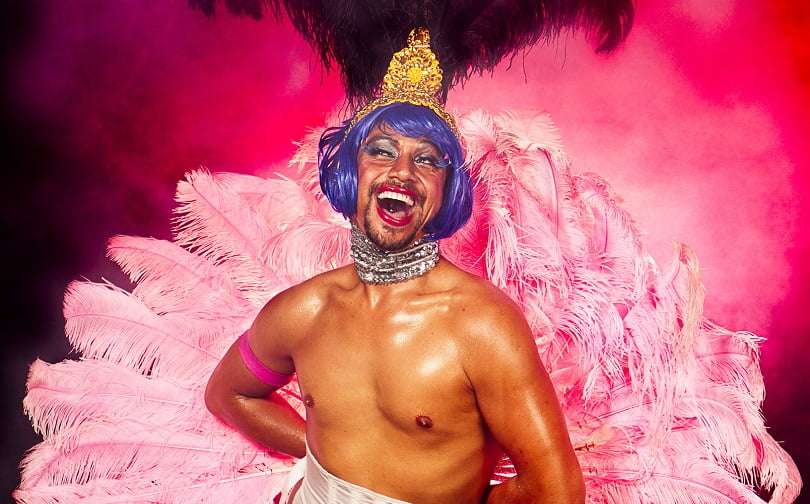 Documenting the police brutality and the events and political action that unfolded afterwards, Witches, Faggots, Dykes and Poofters hears from those directly affected, now proudly known as ‘the 78ers’. The documentary has undergone a 2K digital restoration by the National Film and Sound Archive Restores program which ensures important films are preserved at the highest standards, making them available to cinema audiences once again.

It’s Not Just Me

It’s Not Just Me explores female to male gender transition, producing a complex film narrative that investigates the rich life of four transgender men and those around them. This documentary was filmed as four short films over a three-year period and has been cleverly interwoven to tell a plentiful and complex tale about the largely invisible trans-men and what they go through.

A Moment In The Reeds

Having moved to Paris for university, Leevi returns to his native Finland for the summer to help his estranged father renovate the family lake house so it can be sold. Tareq, a recent asylum seeker from Syria, has been hired to help with the work, and when Leevi’s father has to return to town on business, the two young men establish a connection and spend a few days discovering one another during the Finnish midsummer. A response to the dearth of queer narratives in Finnish cinema, A Moment in the Reeds is among the first queer feature films ever made in the country. Viewing Finland from the perspectives both of an immigrant and an emigrant, the film casts the long-marginalised voices of sexual and ethnic minorities centre-stage in a story about the search for freedom, acceptance and a place to call home.

Saying yes to the future means letting go of the past. Integrating interviews with real couples, The Ring Thing explores the intimate constructs of marriage and what it means to be committed – to your partner and to yourself. When Sarah accidentally proposes to her girlfriend in Provincetown, she finds herself at odds with her partner’s expectations of their future. The mix-up sends both women on different journeys of marital exploration. Sarah, a documentary filmmaker, begins interviewing same-sex couples in an attempt to overcome her fear of divorce. Kristen, who’s ready to tie the knot, sees a future version of her life with Sarah where career and passion threaten to pull the women apart.

The Brisbane Queer Film Festival 2018 runs from March 8 to 18 at New Farm Cinemas. For the full program and to buy tickets, visit the BQFF website.