The 2022 South Australia History Festival is encouraging the city of churches to reflect on and celebrate the state’s rainbow history.

With 500 events on the calendar for the month of May, South Australia History Festival has something for everyone. This includes a raft of events for the LGBTQIA+ community and its allies.

Will Sergeant – a.k.a. Dr. Gertrude Glossip (pictured above) – is set to have a busy month hosting a number of guided tours around Adelaide and at Glenelg.

For Sergeant, this year is especially poignant, as it marks 50 years since he first came out.

“It’s my golden anniversary,” he said.

Dr Duncan was savagely beaten and thrown into the River Torrens – a well-known gay beat at the time – where he drowned.

The shocking crime led to public outrage and became the catalyst for law reform in South Australia. The state was the first in Australia to decriminalise homosexuality.

Sergeant said the unsolved murder of Dr Duncan so soon after his own coming-out greatly impacted him at the time.

He said the History Festival had made a conscious effort to reflect on 50-year anniversary of the tragedy at this years festival.

An after-dark walking tour hosted by Dr Gertrude Glossip will see attendees venture down to the River Torrens on the May 10 anniversary of the crime.

A daytime tour is also on offer for those who are afraid of the dark.

“It’s to really capture the atmosphere of what it might have felt like on that night,” Sergeant said.

“We hope it will help to recreate the situation of that terrible event.” 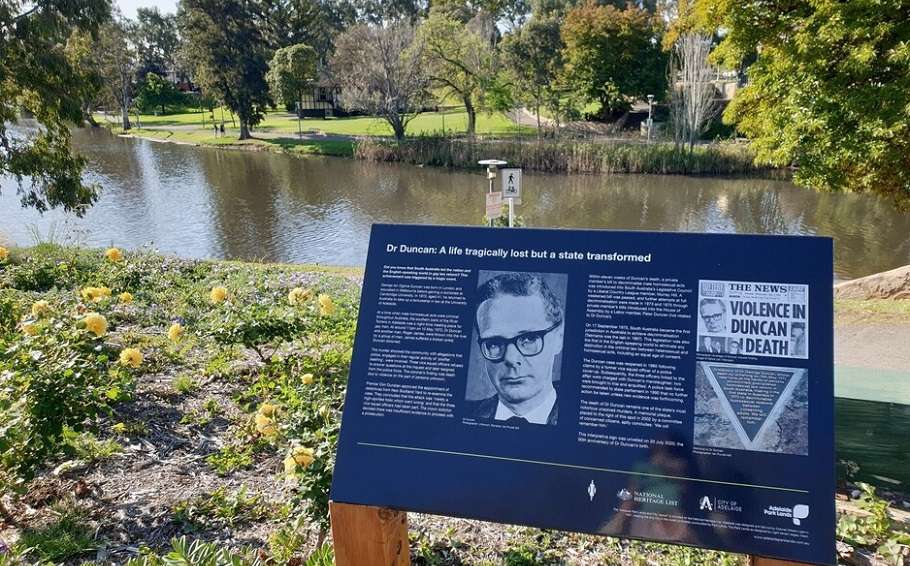 South Australia History Festival manager Dane Wilden said while it was important to reflect on the impact of this crime on South Australia’s legal history, there were also a number of family-friendly rainbow events on offer.

The return of the much-loved Gert By Sea: The Gay Bay History Walk will explore Glenelg’s rainbow history, while an exhibition at Port Adelaide celebrates the changing face of AFL.

Mr Wilden said the events were designed to be as accessible as possible. All members of the community are welcome.

“I think the events are so open-access that you can leave your preconceptions at the door,” Mr Wilden said.

“It’s really an opportunity to really develop your understanding whether you’re an ally, a member of the community or you’ve never had anything to do with the LGBTQ community.

In addition to history tours, an exhibition at the David Roche Foundation explores the HIV/AIDS crisis through the lens of the fashion industry. Acclaimed queer contemporary artist Troy-Anthony Baylis will also be exhibiting at the Handorf Academy.