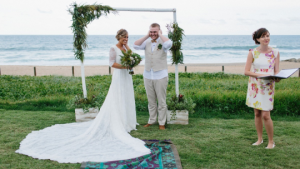 To be legal, a wedding ceremony must include the line: “Marriage, according to the law in Australia, is the union of a man and a woman to the exclusion of all others, voluntarily entered into for life.”
It has to be said but doesn’t necessarily need to be heard!
In an act of defiance and in support of marriage equality, Abbey and Mitch Johnson, who married in Coffs Harbour, requested that their wedding guests covered their ears when the celebrant delivered the requisite “archaic” line.
In essence, they were protesting equal rights for gay couples who still can’t get legally married in Australia.
Later taking to Facebook, Abbey wrote: “Some of you may not know, but for a marriage to be legal in Australia your celebrant has to state that a marriage is between a ‘man and a woman’ only.
“Our celebrant had to say it but we certainly didn’t have to listen to that absolute bullshit. So we had our awesome celebrant kindly ask our guests mid-ceremony to cover their ears.
“I hope one day soon this terrible, archaic, unjust law is abolished in Australia. Until then be kind, be proud and stand up for what you believe in.”
In response to the flood of support on social media, Abbey said: “Mitch and I are absolutely overwhelmed with the love and support being sent our way.
“We had no idea our very small act of defiance would have such an amazing response.”
Fairfax media outlets have also recently reported that other weddings have involved the celebrant turning off the microphone during the offending passage or coughing over it.

Rugby union player and marriage equality campaigner David Pocock and his girlfriend Emma Palandri have refused to wed until gay couples are able to do so.

But for couples who desperately want to tie the knot, the Marriage Act can be a blight on their otherwise happy day.