New South Wales couple Paul and Andrew Hilton had even more reason to celebrate at Sydney Gay and Lesbian Mardi Gras at the weekend.

The pair have had their long-awaited wedding commemorated in a giant street mural in Sydney’s eastern suburbs, painted by famous Sydney street artist Scott Marsh.

The couple, who are from Newcastle, have been together for more than a decade but waited until marriage equality came to Australia before they officially tied the knot last September.

“My favourite part of the marriage equality movement is that children today will never know what its like to not marry the person they love,” Paul told news.com.au.

“I’m so glad the path for the next generation has been levelled a bit so they won’t have to experience what I did.

“I don’t think anyone will have to go through the struggles older same sex couples were forced to endure, which is a really great thing.” 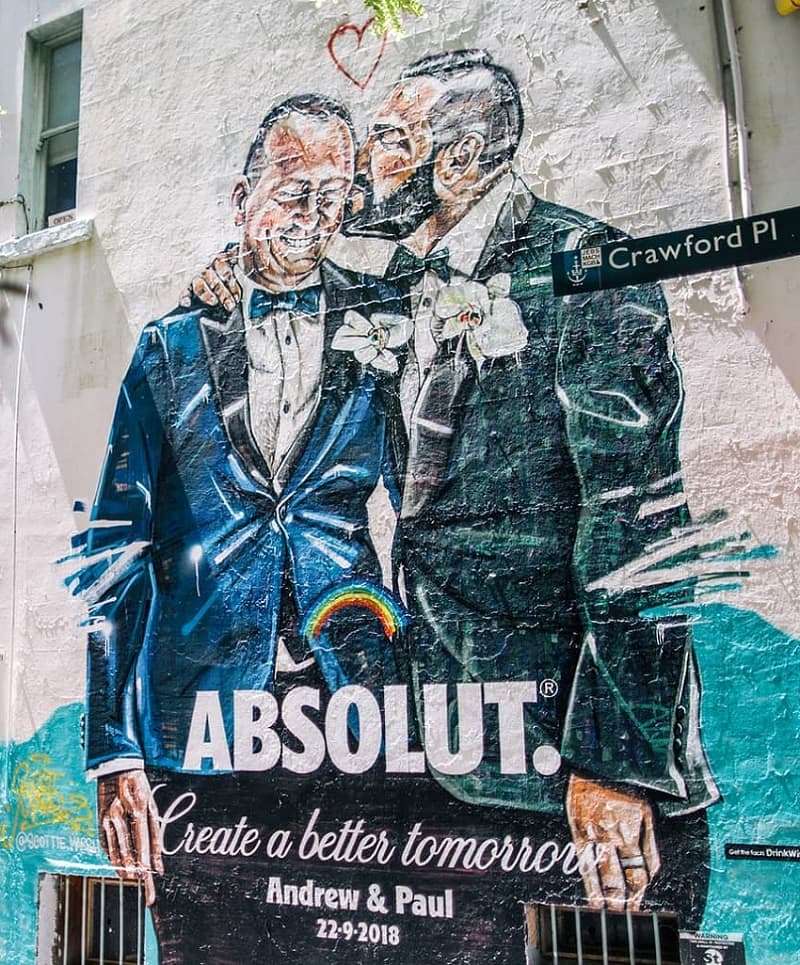 Paul said he was brought up in a strict Catholic family and when he came out as gay at age 35, his wife and two children struggled.

“To go from that really repressed upbringing, to literally being a poster boy for the gay community is quite a journey for me,” he said.

“[Seeing the mural for the first time] was quite overwhelming to be honest, it’s just so amazing.”

The campaign is by vodka brand Absolut, who commissioned artist Scott Marsh to depict Paul and Andrews’ marriage in the 3.5 metre tall artwork on a wall in Surry Hills. Marsh also painted a second couple, Fiona and Sarah Magee, on a wall in Chippendale. Marsh was the artist behind the “Saint George” Michael mural in Sydney that was sadly vandalised. His other artworks have depicted George Pell, Tony Abbott, Fraser Anning, Kanye West and more.

He told news.com.au he was thrilled to be able to paint the murals of the couples to help celebrate the “yes” vote.

“The LGBTQI community has been so supportive of my work over the years, so it’s really nice for me on a personal level to paint these portraits,” he said.

Sydney’s big beach rainbow is officially being made permanent