After receiving Satan-themed pamphlets on the eve of their wedding.

They spent weeks designing a wedding program which was to have listed the order of events, members of their wedding party, and lyrics to the Above & Beyond song “Treasure,” which played as they walked down the aisle.

Instead, they were horrified to find 80 copies of a pamphlet entitled, “Understanding Temptation: Fight the good fight of the faith”.

“Satan entices your flesh with evil desires” and “Sin is the result of your failure to resist the temptation,” the pamphlet read. “It is an act of rebellion against God’s holiness.”

“At first we thought it was simply a mistake, and we had accidentally received someone else’s order,” they told Yahoo Lifestyle.

“But once we saw the images and actually read a bit of the pamphlet, we quickly realised this wasn’t a simple or innocent error.

“Both of our initial reactions were ones of shock … utter shock. The wording and imagery were aggressive, threatening, and deeply personally offensive.

“This was by far the most direct, personal, and aggressive act of homophobia either of us has experienced to date,” they said. 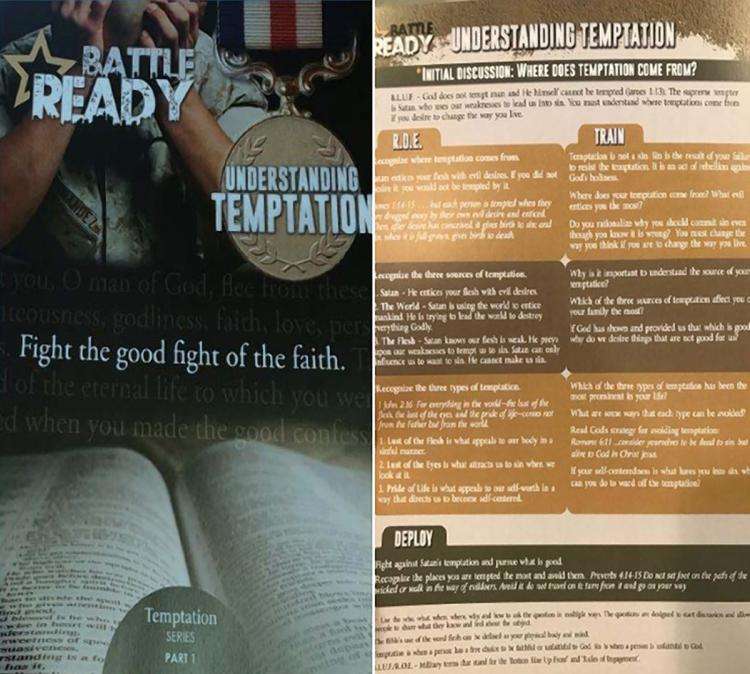 US District Court of Massachusetts

The claim was filed on Tuesday in US District Court of Massachusetts, the state where the company in question, Vistaprint, is based.

Although the Satan pamphlets make no reference to gays, the couple was convinced that the message was intended to as a judgement about their lifestyle, according to their lawyers, David Gottlieb and Michael Willemin.

They paid $79.49 for the programs they never received.

“This conduct is morally repugnant and Vistaprint must be held accountable,” the lawsuit says.

The experience left both men feeling rattled by anger and fear — emotions that have not yet subsided.

“After four months of being married, the pain from those memories has not faded,” Heasley said. “Andrew describes his hurt as though feeling like someone has completely robbed him of what would have turned out to be nothing short of a brilliant wedding.”

Sara Nash, a spokeswoman for Vistaprint, said the company would never discriminate against customers based on sexual orientation.

“We pride ourselves on being a company that celebrates diversity and enables customers all over the world to customise products for their special events,” she said.

“We have just been made aware of this incident. We understand how upsetting it would be for anyone to receive materials such as these the night before their wedding and we have immediately launched an internal investigation.”

Watch: Santa Claus is gay and falls in love in beautiful Christmas ad