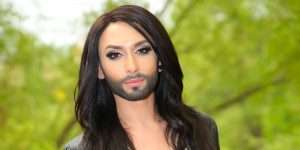 Conchita Wurst is returning to Australia next month to be an ambassador of Adelaide’s upcoming Feast Festival and take part in a drag world record attempt.
As the festival opens on November 15, the bearded Eurovision 2014 champ will give her first Australian performance at The Art of Drag: A Night with Conchita, where drag performers from across the country will gather to attempt to set a Guinness World Record for the largest drag queen stage show.

But Conchita is adamant she’s not there as a judge.

“I wouldn’t dare to judge anyone or tell anyone how they can do it better, especially drag artists who may have been doing this for 20 years or more,” Conchita told Fairfax website Traveller.com.au.

“I’m just so excited about meeting other drag artists and I must admit, I’m a nosy person. I like to know how they do their hair and makeup and maybe find out a few other little secrets.”

The theme of this year’s festival, “Come As You Are,” is about being welcome, being yourself and feeling comfortable, safe and supported, organisers say.

About:
Conchita (from 2011 to 2015 Conchita Wurst) is the stage persona of Gay Icon  Austrian singer, recording artist and drag queen Thomas Neuwirth (born 6 November 1988). Conchita came to international attention after winning the Eurovision Song Contest 2014 as Austria’s entrant with the song “Rise Like a Phoenix”. Neuwirth uses masculine pronouns when referring to himself but feminine pronouns to describe Conchita.[1][2]

Born in Gmunden, Austria, Neuwirth moved to Graz to do his matura exam with a focus on fashion, before embarking on a singing career through the 2007 casting show Starmania. He subsequently became a founding member of the short-lived boy band Jetzt Anders!. In 2011, Neuwirth began appearing as Conchita – a female character noted for her beard – and came second in the Austrian pre-selection for the Eurovision Song Contest 2012.

Conchita was selected to represent Austria at the Eurovision Song Contest 2014, where her performance received the most points from voting. It brought her international attention and established her as a gay icon, resulting in invitations to perform at various pride parades, the European Parliament and the United Nations Office in Vienna.