Sydney Liberal councillor and marriage equality campaigner Christine Forster and her partner Virginia are set to share their upcoming wedding with the whole country.

The couple have been engaged for four years, and took an active role in campaigning in last year’s same-sex marriage postal survey. They announced at the time they were planning a Sydney wedding for Friday, February 2.

Christine and Virginia are set to share the occasion with the country on the next episode of ABC program Australian Story.

“It’s been a long and sometimes very difficult journey but Virginia and I, with our marriage, are going to put the tough times behind us,” Forster told the program.

Virginia added, “We had six children and two families that were catastrophically blown off the planet by Christine and I doing what we needed to do, and that was to be together.”

The wedding’s guest list will bring together a mix of Liberal politicians and Sydney drag queens, and will be attended by Christine’s sister Tony Abbott, one of the country’s highest-profile “no” campaigners in the postal survey campaign.

It’s official! @surryhillsgal and I have lodged our Notice of Intent to Marry #Excited #LoveIsLove #MarriageEquality #auspol pic.twitter.com/O08mmI6ckX

The couple opened up to Australian Story about the emotional fallout of those divisions within their family.

“Tony and I had a discussion and I said, ‘I fully understand that you needed to make your case, and make it clearly, but it’s not okay to use your sibling as a political football,’” Virginia said.

What a lot of fun we’ve had planning for our big day #chrisandvigwedding #aanda.events #canturijewels laissez_faire_catering #bigday #wedding #marriageequality #sydney

A post shared by Councillor Christine Forster (@crchristineforster) on Jan 30, 2018 at 1:05pm PST

When the successful “yes” result in the postal survey was announced in November last year, Christine and Virginia said it would mean “everything” to them to be able to wed on Australian soil.

“On a personal level it means now I can marry this woman I’ve treasured for ten years, on Australian soil, hopefully, under Australian law… in front of my friends and family,” Virginia said at the time. 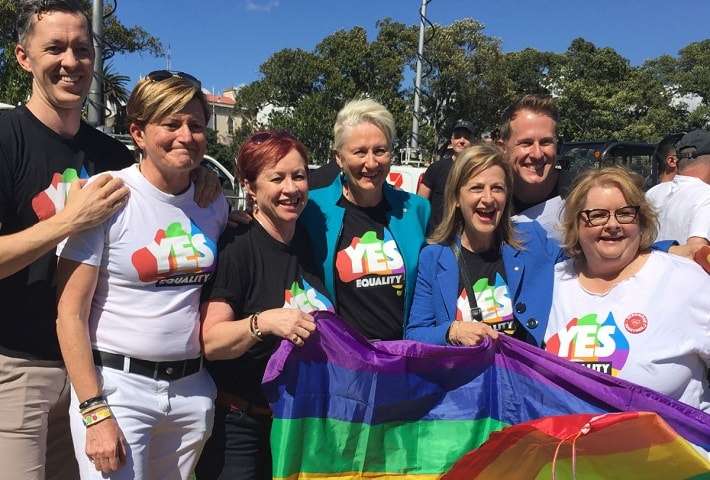 Christine said the reform would be a positive change for the country, especially for their children’s generation.

“Kids of that age can know they have the same opportunities, the same future, the same rights, the same equality under the law that everybody else does,” she said.

Christine and Virginia’s same-sex wedding will feature in the next episode of Australian Story, airing on the ABC on Monday, February 5.