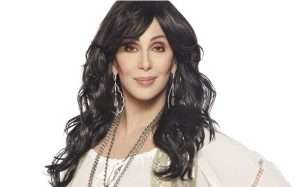 Cher has hinted that she’s still working on the long-gestating stage musical version of her life.

“Spent last 3 Days with Rick!! He is Writer of Cher Musical. We had so much fun … He wrote Jersey Boys. Hhmmm… She’ll be more of a PAIN,” she tweeted.

Her first announced tentative plans for the stage show in a series of excited tweets back in June 2012.

“Prods. R writing [musical] now about my life with my music. It’s very Interesting idea. There r 3!” she tweeted, revealing one would represent the Sonny & Cher years, another would be a solo  to the “Believe” era and the last would be Present Day.

“It’s a VERY SLOW PROCESS! been working on it quite a while now.” We should be something in the next few years!

Cher Is Touring Australia, And People Can’t Handle It

The Cher Show is a jukebox musical with a book by Rick Elice that tells the story of the early life and her career. The musical had its world premiere at the Oriental Theatre, Chicago, in June 2018 and is expected to open on Broadway in December 2018.

‘A Girl’s Guide to World War’ opening in Caloundra