A Brunei owned Brisbane hotel is using a 1980s visit by Elton John to promote their upcoming birthday celebrations despite John’s support for a boycott against the Sultan of Brunei’s hotels.

Laws which came into effect yesterday in Brunei include execution by stoning for homosexual acts and adultery, prompting global outrage.

Brisbane’s Royal on the Park Hotel is celebrating the 50th anniversary of its 1969 opening on April 11.

The hotel is promoting the event on Facebook with posts listing “50 Facts about Royal on the Park.” The list thus far contains 45 facts.

The fact the hotel is owned by the Sultan of Brunei through the Brunei Investment Agency is yet to make the list.

However, at Fact 9, the list spruiks a 1986 visit by Elton John, a prominent supporter of a boycott against the Brunei owned Dorchester Collection of hotels.

“Elton John made a controversial choice in 1986 to check out of his accommodation at the Sheraton in exchange for a room at the then Parkroyal as he wanted a more ‘homey’ room,”
says the Royal on the Park Facebook page.

A few days ago, Elton John supported a boycott of the Sultan’s hotels.

“I commend my friend, #GeorgeClooney, for taking a stand against the anti-gay discrimination and bigotry taking place in the nation of #Brunei — a place where gay people
are brutalized, or worse — by boycotting the Sultan’s hotels,” he said in a tweet.

The Royal on the Park Facebook page makes no mention of the ownership of the hotel though the national flag of Brunei sometimes flies at the hotel entrance.

Questions regarding the ownership of the hotel posted to the Facebook page in the last two days, are no longer visible on the page. 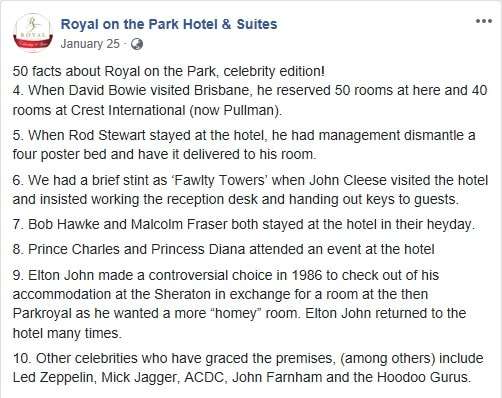 QN Magazine emailed Royal on the Park seeking comment about the ownership of the hotel and the deleted Facebook comments. We received no reply up to this time.

In his comments about the boycott Elton John acknowledged that a boycott would affect employees of the Sultan’s overseas business interests who have no influence over his decision making.

“Our hearts go out to the good, hardworking employees of properties owned by the Sultan of Brunei, many of whom we know to be gay,” he tweeted.

During the 2014 boycott, the Sultan’s hotels used gay employees to deflect from the fact the Sultan is the beneficiary of the business’ profits.

At the time, Steven Boggs, head of guest relations at the Beverley Hills Hotel expressed sensitivity for the boycotter’s concerns but noted the sultanate had not yet executed anyone.

“Now the minute I wake up and someone has actually been stoned to death,” he said, “I [will] have to rethink that.”

Boggs mentioned his own previous boycott of Target over a donation to an anti-same-sex marriage politician and justified continued support of the Beverley Hills Hotel because of its track record of support for same sex marriage among other causes.

Economists predict that Brunei will run out of oil in the next few decades. Even the recent downturn in oil revenues has impacted on the Sultan’s ability to buy his subject’s
acquiescence to his autocratic regime and signs of dissent have emerged.

For the moment the Sultan’s investments in hotels are mere dalliances, but the time will come when these investments are necessary to the continued wealth of his family.

The boycott is also a necessary tool to demonstrate to other less wealthy regimes that there are consequences for human rights abuses.

Visiting a world of pain on the Sultan’s investments may not impact him personally but it will forewarn other leaders looking to shore up power at the expense of minorities and
dissenters in their countries.

Check out 50 Facts about the Royal on the Park at: https://www.facebook.com/royalonthepark/