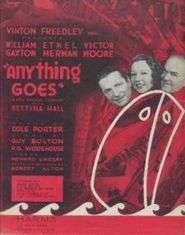 Having wowed audiences all over the world, and winning a truckload of awards along the way (incmega-hithree Tony Awards), the musical mega hit Anything Goes will be hitting Brisbane this month.

Playing at QPAC’s Lyric Theatre 25 July to 16 August, Anything Goes transports audiences onto the S.S. American for a campy & rollicking ocean voyage from New York to London. Etiquette and convention get tossed out the portholes as two unlikely couples set off to find true love… proving that sometimes destiny needs a little help from a crew of singing sailors, an exotic disguise and some good old-fashioned blackmail.

Featuring the hit songs You’re The Top, I Get A Kick Out Of You, It’s De-lovely and of course Anything Goes, this is a first class musical extravaganza, a ship-shape production that will have you ‘all at sea’ if you miss out on a ticket!

Anything Goes plays 25 July to 16 August at QPAC’s Lyric Theatre. Tickets are available via www.qpac.com.au or call 136246.

Since its 1934 debut at the Alvin Theatre (now known as the Neil Simon Theatre) on Broadway, the musical has been revived several times in the United States and Britain and has been filmed twice. The musical has long been a popular choice for school and community productions.

Your chance to join Joel Creasey on tour in 2023

Vonni to play Bernadette in Gold Coast season of Priscilla