The government plans to introduce the as-yet-unseen legislation before the end of the year. But advocates are concerned about the detail of the bills and their impact on the LGBTIQ community.

A few hundred people gathered in Queens Gardens in Brisbane on Saturday (August 17) to hear from several speakers at the rally.

Brisbane Anglican priest Reverend Jo Inkpin said those pushing for the right to discriminate didn’t represent the views of the majority of Christians in Australia.

“I’m a proud member of the LGBTIQ community and also a dedicated person of faith,” she said.

“We queer people of faith exist in substantial numbers. But typically we are erased and our voices are ignored.

“We don’t want religious exemptions, we don’t want them to hurt us or others. The majority of our fellow Australians of faith agree with us.

“It’s pretty clear that Jesus said ‘Love your neighbour as yourself’. No discrimination. Read the book.”

Rev Inkpin said the “religious right” were arguing for “power and privilege and not freedom and love, religious or otherwise.”

“What the religious right is doing is profoundly abusive, above all to rainbow people but also to the words and practices of faith itself.”

‘Who’s going to protect the Christians from the gays?’

“The proposed Religious Discrimination Act will protect religious people from discrimination,” she told the crowd.

“But they will also get the privilege to discriminate against LGBTIQ people, unmarried mothers, those in de facto relationships and anyone else who doesn’t fit into their religious ethos.”

She said the “religious freedom” push was “plan B” for right-wing conservatives after the successful marriage equality vote in 2017.

“I was appalled last year when a government Senator chairing a Senate inquiry told me, ‘Now who’s going to protect the Christians from the gays?'” she said.

Shelley Argent encouraged everyone to contact their local politicians and call on them to stand up for equality. 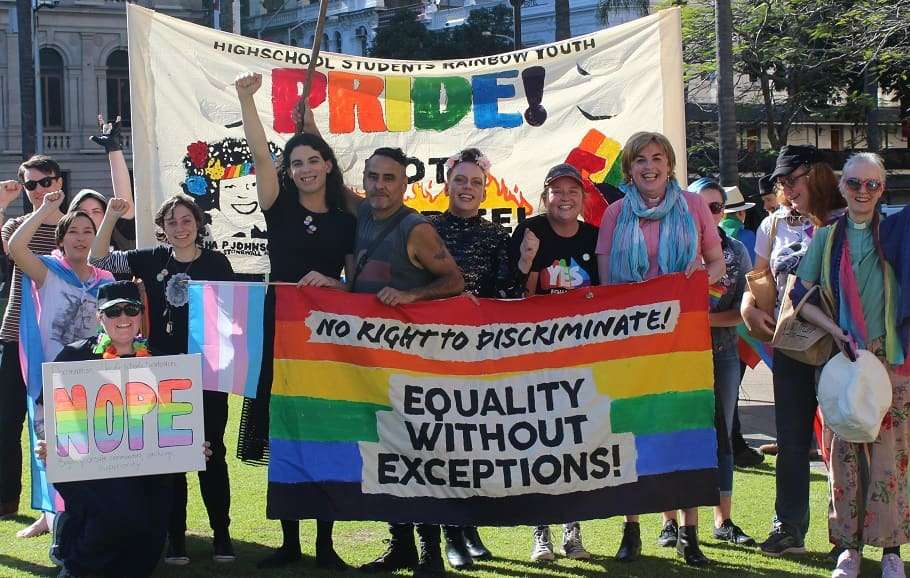 Also, Queensland student Jamie spoke out against religious exemptions permitting the expulsion of LGBT students and staff at religious schools.

The legal exemptions caused outrage last year and Jamie told the rally they must be scrapped.

“Up to 80,000 Aboriginal Australians identify as queer [but] they’re not safe to come out due to religious colonisation occurring in remote and regional areas,” he said.

“Religious agencies receive license to provide health services and mental health care vital for our survival. But the groups indoctrinate and determine the moral paradigm under which these communities operate.

“Under the conservative government, we are currently in the midst of an Aboriginal and Torres Strait Islander suicide crisis. Teenagers on country are killing themselves because they can’t access services with religious groups standing in the way.”

After the speeches from LGBTIQ advocates, the crowd marched through Brisbane’s CBD.

LGBTIQ groups are also planning anti-discrimination rallies for Perth on August 24, and Melbourne and Canberra on August 31.