If you aren’t familiar with local punk rock band Being Jane Lane, you soon will be when they take to the main stage at the 2018 Big Gay Day street party.

Louise, Teigan, Kayla, Kate and Phoebe make up this fierce queer punk quintet from southeast Queensland who have been making waves in the Brisbane music scene. Forming just over four years ago, this gutsy group of five strong-willed women are determined, passionate and not afraid to speak their minds.

Band member Louise Sanders spoke with QNews to discuss their journey together as a band, what the future holds, and how it feels to break the mould in the queer community.

Performing at Big Gay Day is a huge opportunity for the band who have worked incredibly hard to make a name for themselves.

“It’s amazing,” Louise says. “We’ve been trying for a while now, so to finally actually get this gig is a pretty big deal for us. Trying to break into the queer community for us has been challenging, as we’re a little bit more alternative and punk.”

In just a few years the band has achieved a great many milestones through persistence and determination. “We’ve been playing shows for four years, we haven’t stopped. We’ve played to no-one, we’ve played for heaps of people, and we’ve played at heaps of venues in the Valley. I feel like, as a band, that’s all you can do to get your name out there” says Louise.

Four years ago the band took to the community stage at Brisbane Pride Fair Day, a place for new and emerging acts to find their feet. They immediately caught the attention of punters. “It was a huge breakout for us. It was our first introduction to the gay community that has grown to the main stage since then. That was an awesome way to start it off.

“Obviously we’re doing something right. We are on the heavier side, but I think there are plenty of people in the queer community who are into alternative music.”

The punk sound and aesthetic is unique, heavy and confronting. So what was it that drew the band to embrace this style?

“I think we’ve all sort of grown up with alternative music in our backgrounds,” Louise reflects. “We’ve all played different more alternative styles of music. When you bring five people together with all those sorts of styles we certainly find a platform together to express ourselves.”

Self-expression is definitely reflected in their work as Being Jane Lane tackle hard issues head on. Their 2017 song “Sailboat” graphically deals with substance abuse, self harm and domestic violence. It’s raw and confronting, but something they say needs to be talked about.

“That was a really powerful song. When we teed up with the director for the film clip he didn’t want to take anything out of it. These are things that are generally overlooked and are things that society doesn’t address and doesn’t want to talk about. We took a massive risk being so full-on with that film clip, but it paid off as we’ve had a lot of feedback about that film clip really touching people.” 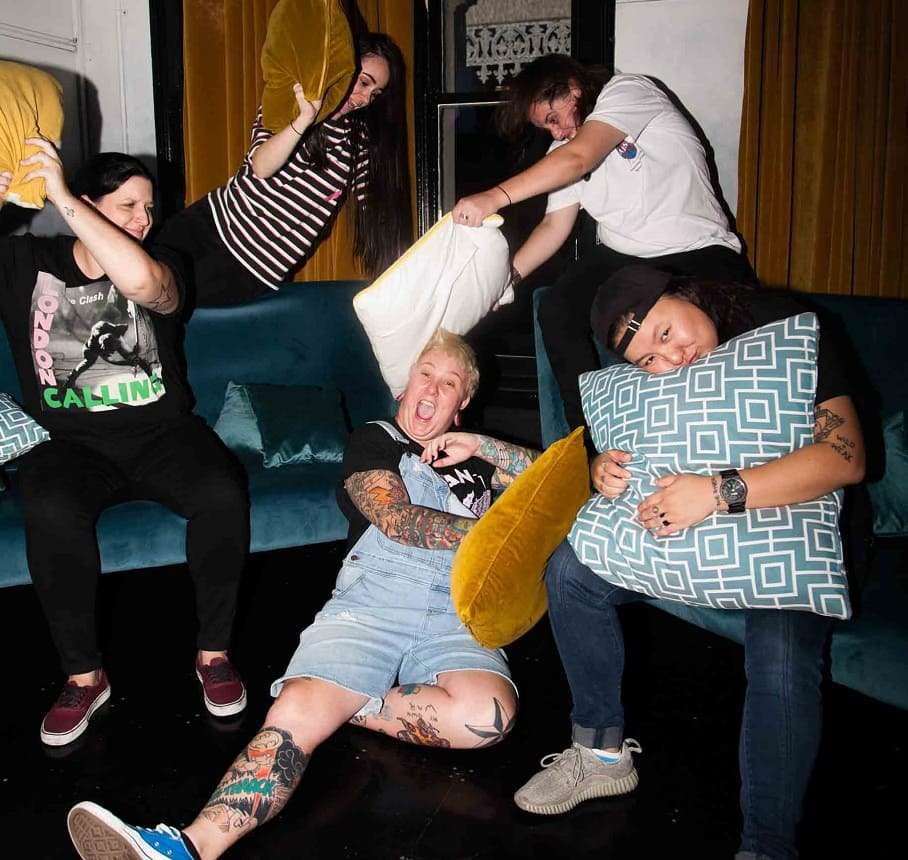 If you’re a Daria fan you’d recognise the band’s name, the hit 90s animated show was the inspiration for their name. “It came from Daria. Her best friend was Jane Lane. I was watching a random episode where Daria said ‘you’ve got to go off Being Jane Lane’. I suggested it to the girls and it stuck from there.”

The band formed through chance meetings and word of mouth, connecting through their love of music and the work they create. Louise describes them as the sisters she never had, who’ve all taught each other a lot about working together creatively.

“We’re five strong-headed women. There’s always going to be little issues and things, but you learn to grow as people and you learn to communicate. If there is an issue you learn to talk about it and you learn to be open about it. You need to be able to accept criticism. Especially when five people are putting their creative input into something they’re so passionate about.”

Adding to their 2018 success, the band have been signed to a small local label. They’re now furiously working on their first studio album, giving them a chance to give their ever-growing fanbase a chance to take their music away with them.

“We’re really focusing on pumping more music out, so writing and recording is our goal for 2018. We’re on a label called Human Records, which is a little indie label on the Gold Coast. They saw something in us which was flattering and very humbling.”

Louise describes the upcoming album as a great chance for them to connect with and give back to their fans. “It’s going to be a really balanced mix of music that people will know, songs that they’ve been waiting to have a copy of. But we’ve also been working our butts off writing, so there’s going to be new songs that people haven’t heard. Which is hopefully going to be the new direction we’re going in as we are growing all the time.”

So, where to from here? An international tour of course.

“We’re in talks to do a tour of Japan at the moment. It’s been a dream of ours to go and tour over there. It’s definitely something that we are very serious about doing. There’s a very big punk vibe in Japan. They love punk bands from Australia. I think that will be amazing. And when the album comes out, we’ll of course be doing a tour as well. We’re all about touring, we love it.”

You can find Being Jane Lane on the Main Stage at Big Gay Day on Sunday the 11th of March. For more details and tickets head to the Big Gay Day website. Get in touch with Michael James on Twitter.