As the Hustlers swing into pre-season preparation, QNews Magazine talks to some senior members about life in Brisbane’s gay-inclusive Rugby team.

It hasn’t been the hottest of Brisbane summers, but the humidity is typical. Even now, in the cooling sunset, the air weighs heavy. My ambling stroll is enough draw a little sweat as I approach Easts Rugby Union field, where the Brisbane Hustlers train.

There’s at least 30 of them, a wide assortment of heights, builds and skin tones. Just now they’ve split into two groups, each moving as a solid line over the field. Soon the players are individually cycling through ball catches and zigzag sprint patterns, with occasional stops for press-ups. The mood is focussed but friendly. There are cheers and handclaps for a straggler as he finally completes a lap.

Later, as they finish up with a game of touch, I’m introduced to Hustlers president Martin Tebbut, happily buzzed and streaming perspiration. He is most people’s idea of a typical rugby player – tall, broad – but I can’t help remarking on the variety in body types see on the field.

“That’s the best part about rugby,” Marty enthuses. “With the AFL it’s good to be skinny and tall. Rugby League you want to be about six foot, solid, fast. But Rugby wants tall and skinny, short and fat, the tiny little guy who plays a halfback, the fast guy, the guy who can run all day. There’s a position for everyone. So it really does have a lot of synergies with inclusive sport.”

“Inclusive” is the key word for the Hustlers: welcoming players who identify as gay, rather than excluding those who aren’t.

“We’ve got straight players who are like, ‘I came down here and I found my people!’” Marty smiles.

“The biggest thing is that people have to buy into that inclusivity. In our club it’s extended across much more than just sexuality and stuff. We’ve got a No Dickhead policy. If someone’s bullying or excluding other players they’re out.” 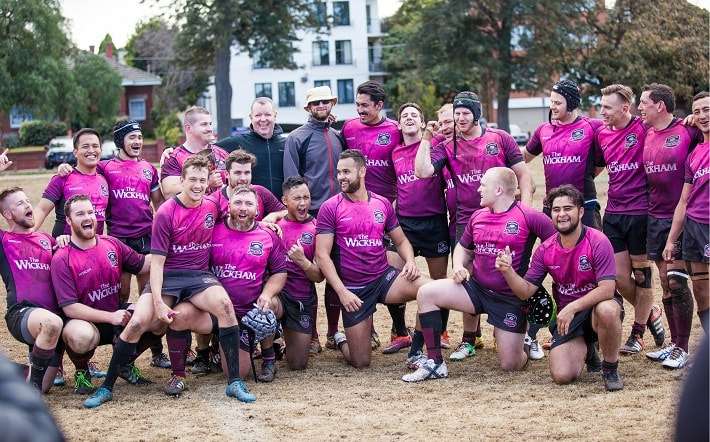 The current Hustlers club was established in 2012; they play in the Division 2 of the Queensland Suburban Rugby Union competition.

They also play for the Purchas Cup, the Australian and New Zealand gay-inclusive team championship, and the Bingham, the World Cup of gay-inclusive rugby. For the Bingham the Hustlers placed second in 2014 (Sydney) and third in 2016 (Nashville).

I raise the question a coworker asked today when I mentioned this evening’s assignment: Why do we need specifically gay-inclusive rugby teams?

For myself, I say, I can see gay men lack visibility in Australian professional team sport, especially at the highest level. No A-Grader has come out publicly since Ian Roberts in the 1990s. Clearly we’re not at the stage where it’s normal and comfortable to acknowledge a gay player’s partner as it is to profile a straight player’s wife and kids on The Footy Show.

Marty agrees. “I’m aware of players at the top level, multiple players, who are closeted but don’t feel comfortable to be exposed, to have that pressure. We say we’re inclusive, but people who are gay playing at that level don’t feel it’s there. They haven’t come out. So there’s definitely still a need for this.

“I’ve played my whole life. I heard more homophobic slurs when I was down at Wynnum as a closeted player because it was was across the board, for myself as well. You were firing yourself up.

“It was about being aggressive in every way possible. And I didn’t understand the damage it was doing, even to myself.

“Now I notice the difference as we play against clubs and they don’t do it. So they’re conscious. Doesn’t mean they’re not thinking it, and I’m well aware they’re thinking it from the looks you get, the sly remarks from the sidelines. And every so often the slip-ups when it bubbles up to the surface.”

But even that’s ok, because those players are working through it. “And fantastic,” says Marty, “because with time they won’t have to work at it.” 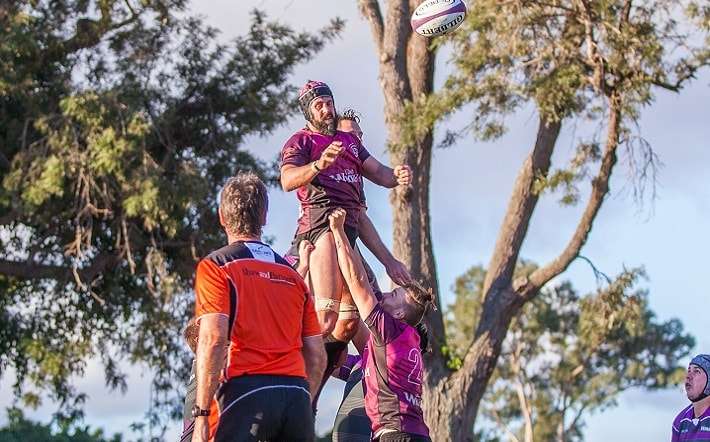 The touch game we’ve been watching now winds up, and we’re joined by Hustlers vice-president James Gentle and secretary Jason Garrick. I ask if there being an inclusive team has helped some players come out.

“I don’t know if it’s been as black and white as ‘in’ or ‘out’,” says James. “But there’s definitely been some people who’ve really struggled and then come to the end of last season and have notably, and self-reflectively, said ‘I’m so much more comfortable now.’”

Jason observes: “What the Hustlers have done for some families, mine included, has been it’s the conversation starter.

“It’s actually normalised homosexuality, I think, for some of my immediate family. For some of our former players, it was their family’s first time to go to a gay-related event. And it was a rugby match!” Many Hustlers have also found their social lives blossoming since joining the team. “When I first came down I had two other gay mates, that was it,” Marty admits. “And now it would be in the hundreds, through the club and through meeting people’s friends.

“For me, I know I wasn’t identifying with gay stereotypes and that was all I had exposure to. So I was like ‘That’s not me. But who is me?’ and it was about coming out and going ‘Actually these people are me.’ ’Cause they like rugby and they also like guys, same as me.”

I wonder aloud if part of some straights’ discomfort with gay players is the confusing overlap of intimacies they suggest.  After all, a gay man can find both comradeship and romance with a teammate. Is there a policy about relationships within the Hustlers?

“Leave any drama at home. That’s the thing,” says Marty firmly. “There’s a number of couples out here, and they have good times and bad or whatever. But training’s training. This is sport, it’s around mateship, not relationship.”

All three players are excited about the team’s upcoming Boot Camp, from February 9 to 11.

“That’s where we go out to Taigum Ridge down Northern New South Wales,” Marty informs me. We’ll aim to have 35 to 40 people down there, we’ll have our Coach and hopefully some specialist coaches in for that as well. Plus some of the more experienced players or retired players will come and help, so that we can split the guys off who are new at playing and do some basics with them.

“Sometimes that’s sitting down and watching a video of a game. Because out of these ten new guys tonight I reckon two of them have watched rugby before. When they got told to pass the ball backwards before I saw some blank expressions! 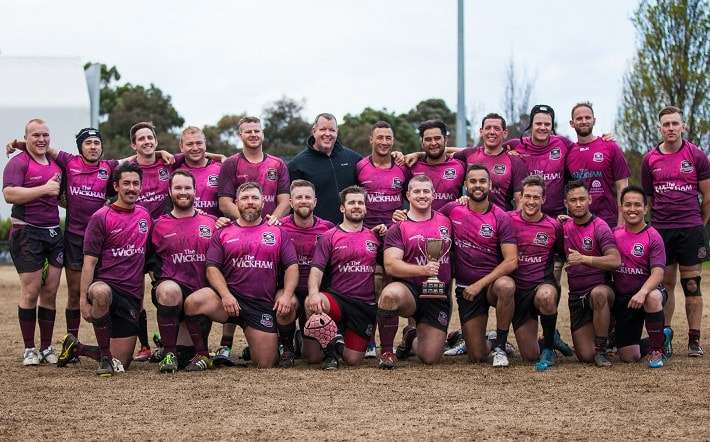 “Boot camp is really key for people to come along, because it starts to build the team culture.  Everyone’s away together, you train all day and it’s really hard. You’re exhausted at the end of it. And then told you’ve got to do skills, you’ve got to do aerobic work. You’ve got to push each other.

“But with great pain comes that reward. That’s how everyone bonds. Then you have a few drinks on Saturday night and everyone gets up on Sunday and has to train again. And that’s another bonding moment.

“No one feels like doing it, but having people around you in the same pain means that you’re like ‘All right if they can do it, I can do it.’”

The Hustlers are still accepting new team members for 2018, and also offer Development Player Registrations. For more on how you can join or become an official supporter, check out the Brisbane Hustlers website or get in touch through the team’s Facebook page.

On this day December 20: Frank Kameny fired and fired up