In September, the gay and inclusive Brisbane Hustlers rugby team will host the Purchas Cup in Brisbane for the third time. The Hustlers are the current reigning Purchas Cup champions and they’re having one of their best years yet, writes the club’s president Jason Garrick.

The Brisbane Hustlers are playing rugby, sharing stories and celebrating a game which is for everyone.

Firstly, we are currently enjoying our greatest ever success in Queensland grassroots rugby. We compete in a Queensland Suburban Rugby Union competition called the Pegg Cup. We take on teams like the Ipswich Rangers and Brisbane Irish – stalwarts of Brisbane rugby.

This year marks a watershed moment for the team. This Saturday we’ll play in the grand final of the competition. It is the first time a gay and inclusive rugby team has progressed this far in the competition.

During the year, players shared personal stories of their path towards self-acceptance and love.

2019 recruit Steve Bevan said, “From the time I went to my first training session I was welcomed by a bunch of guys who I now call friends.”

“Having never played a game of union in my life, all of the boys took me under their wings to teach me the skills needed for the game. Everyone made myself and my partner Mitch feel included and part of a passionate and affectionate community.”

Gwyn Dixon, a recruit in 2017 and now Secretary of the club, says “After joining the Hustlers, I’ve learned to love myself. I realise what it’s like to be happy.”

On 13 and 14 September 2019 the Brisbane Hustlers host the Purchas Cup for the third time. Brisbane will be the temporary home to the Sydney Convicts, Melbourne Chargers, Perth Rams, Adelaide Sharks, and the New Zealand Falcons.

The Brisbane Hustlers are the defending champions.

The 2019 tournament aims to bring together more than just the gay and inclusive rugby teams of Australia. It aims to change the conversation in grassroots sport in Brisbane with events being planned prior to and post-tournament to celebrate the idea that sport is for everyone. 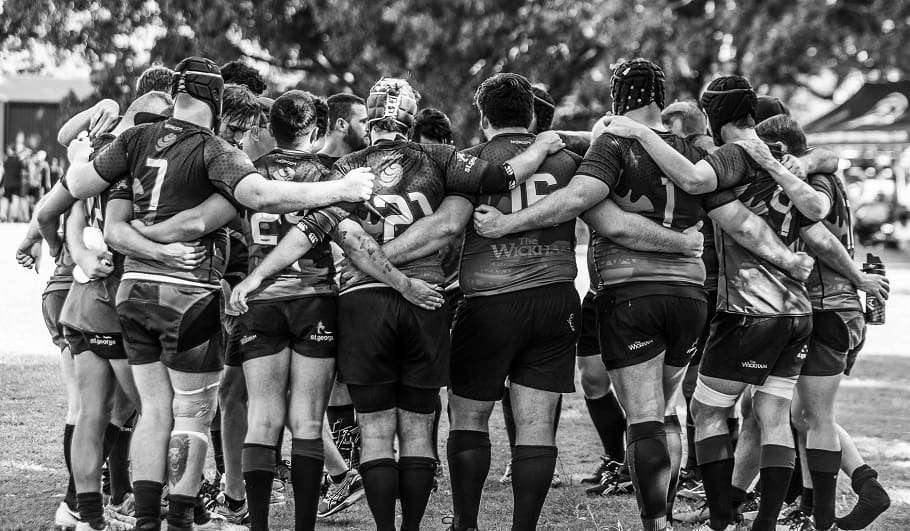 In a year where rugby union has been distracted by off-field comments, the Brisbane Hustlers and clubs reiterate the message that the cornerstone of sport is player safety.

If a player feels safe, emotionally and physically, they can participate and compete to the best of their ability. While homophobia, biphobia, and transphobia continue to exist at all levels of sports, we welcome everyone.

You can play with us, compete with us, and you’re welcome with us.

The Purchas Cup also has the support of the Queensland Reds and Rugby Australia. With the championship held at Ballymore, the spiritual home of rugby in Queensland, there will be the opportunity for players, their families and supporters to come and experience a tournament atmosphere and celebrate LGBTIQA participation and competition within the game.

The Purchas Cup and other tournaments which celebrate LGBTIQA inclusion are imperative to addressing homophobia, biphobia, and transphobia in sport. These platforms provide a direct response with direct action through inclusive participation.

Sadly research indicates continues discrimination in sport. 80% of participants experience homophobia while playing team sports (Out on the Fields, 2014).  Research by Monash University indicates a strong disconnect between the positive attitudes of participants to gay people playing rugby and their ongoing use of homophobic words.

On behalf of the Brisbane Hustlers, I need the readers of this article to know that you can play. I need you to know that sport is yours.

I look forward to welcoming you and seeing you support the Hustlers and the Purchas Cup and show the rest of Australia (and the world) about our vibrant city and how we are making sport safer and more inclusive by being visible and competing to the best of our abilities.

The Brisbane Hustlers look forward to welcoming you all on 13 and 14 September 2019. Rugby is yours. Sport is yours.

For more information on the Brisbane Hustlers and the Purchas Cup, head to the club’s Facebook page or brisbanehustlers.org.