A large crowd gathered at the venue on Friday night (December 6) for a special celebration with Sporties’ owner Neil McLucas and his team.

Neil (pictured, front) thanked everyone for their support for Sporties before cutting a rainbow pride flag birthday cake on stage.

He said the Sportsman Hotel was born to give the LGBTIQ community “a special place we could go to and say that we’re home.”

“The gay community was quite fractionalised at that time,” he said.

“We were beaten into the ground by Joh Bjelke-Petersen and the attitudes of the time. We couldn’t do a lot of things.

“I wanted to make certain we had a place we could go, any day and night of the week, to feel at home. That’s why I chose this hotel.”

How Neil McLucas came to own the hotel on the hill

Neil McLucas said some “scheming” was needed to secure the Sportsman Hotel when it went up for sale among other venues at the time.

“I’d had the lease here for 18 months when it went up for auction. It was up for sale among 60 other hotels,” he said.

“I thought, how could I stop this from going to someone else?

“I got a big tin of pink paint and wrote ‘gay’ on the sign outside the hotel advertising the auction on that particular date. 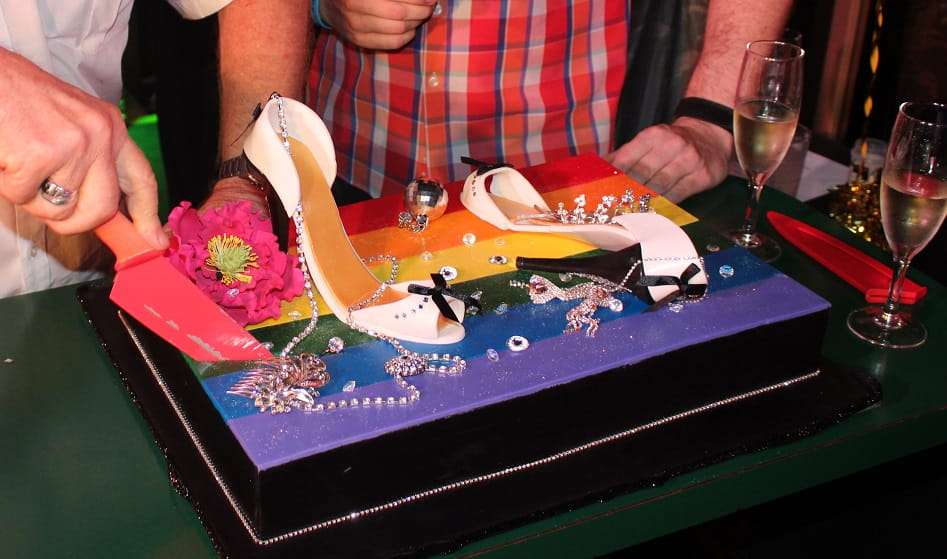 “At the auction, I waited for the Sportsman Hotel to come up. I stood up and said, ‘Is that the hotel on Leichhardt Street with ‘gay’ written on the sign?’ The auctioneer told me to sit down.

“I stood up again, and said, ‘Are you sure it’s not that place up on the hill with ‘gay’ on the sign?’

Neil then went to the realtor’s office later with a cheque for less than the asking price.

“I went to his office and said I was there to buy the hotel with the ‘gay’ sign,” he said.

“I want to thank you all for your support over the years,” he told the crowd.

“We’ve seen a lot of drag queens and a lot of staff come through the Sportsman Hotel over 30 years.

“I’m so happy to have a great team behind me. They keep Sporties going and they keep me going too.”

The Sportsman Hotel is located at 130 Leichhardt Street in Spring Hill, Brisbane. Find out more at the Sporties website and Facebook page.