Brisbane gay couple Barry Bird and Malcolm Chalmers didn’t think they ever wanted to get married.

Barry told the story of marrying his partner last Thursday at QNews Magazine‘s community forum celebrating the first anniversary of the historic vote to allow marriage equality in Australia.

After 19 years together, Barry said marriage “was never in their mindset” but the lack of legal recognition as a couple had seriously affected them.

“We had a lot of legal issues a couple of years ago and because we were not married – although I was named in the court documents and had to pay legal bills – I was regarded by the court as simply an interested third party,” he said.

“We asked our lawyer how we could protect ourselves and she said, ‘It’s a shame you can’t get married. That would be the easy way.’

“Because we could not get married despite 19 years together, it was going to cost us over $20,000 to protect our joint assets in case things went against us.

“Soon after the postal vote was announced. I became active in the campaign. I lost friends through my advocacy for same-sex marriage.

“When it passed, I was much more emotional than I’d expected and cried. About a month later I said to Malcolm, ‘Do you want to get married?’ He said, ‘You know Barry, I’ve never been married before.’

“Originally, I planned a very basic ‘go along to the registry office and have a couple of drinks later’ style event.

“But we ended up having a truly spectacular wedding. I put on a drag show and every gay bell and whistle I could think of. 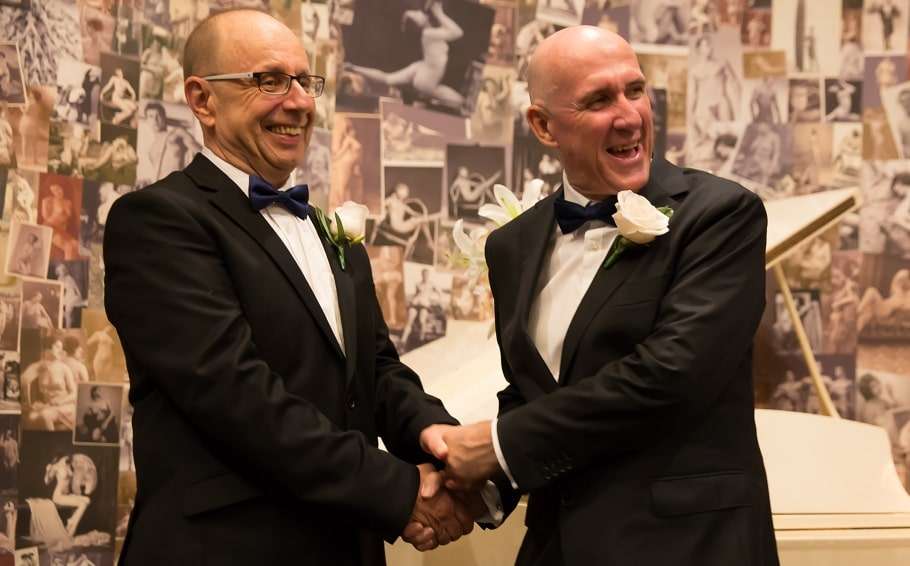 “Our friends, including Catholic priests and other religious folk, had a whale of a time. No matter how risqué the drag performance they clapped and cheered.

“We later discovered many of our friends had voted yes, and regarded the massive wedding celebration as their reward for voting!

“Afterwards, we realised how thrilled we were by being able to call each other ‘husband’ and know it was more than just an expression.

“Other same-sex partners we have spoken to have experienced the same feeling.”

Barry said despite his misgivings about the postal vote, it was “the people who said yes, not the parliament. That makes it very hard for the parliament to take it back.”

Peter Black, President of the Queensland AIDS Council, Shelley Argent, National Spokesperson for PFLAG and Nita Green, Labor Senate candidate, all involved in the marriage equality campaign, related tales of the long years of the fight for same-sex marriage at the QNews Magazine forum.

Jonathan Sri, Greens Councillor for the Gabba, spoke of the need for progressive politicians to nail their colours to the mast and support just causes.

Jason from Brisbane Hustlers spoke of the coming issue of LGBTIQ domestic and family violence, an important issue QNews Magazine will begin addressing in our next issue.

Actor Kal Penn comes out and reveals engagement to fiancé