A gay couple whose emotional reaction to the announcement of the “yes” result last November went viral online have wed in Brisbane.

Brad Harker and Scott D’Amico (pictured) were among those gathered in Queens Park to hear the result announced on November 15.

The couple became the local face of celebrations as photographs and footage spread of the pair draped in a rainbow flag and shedding tears of joy at hearing the 61% “yes” result.

And last week, Brad and Scott married in front of 200 family and friends at Broadway Chapel in Woolloongabba.

“There was not a dry eye in the chapel and it was intimate, inclusive and heartfelt,” Scott told the Courier-Mail.

“We had both ‘yes’ and ‘no’ voters present, however they showed their love and support despite their views on marriage equality.”

The pair said they wore handmade feather capes during the ceremony, as a tribute to the years they spent campaigning for marriage equality. “These are the same feathers we wore in countless gay parade marches advocating for marriage equality across the globe,” Brad explained.

“Thank God, Australians did vote yes because they empowered the change necessary to allow Scott and I to lovingly marry each other.”

The couple were among hundreds who gathered in Queens Park in Brisbane on November 15 to hear the announcement that a majority of respondents to the postal survey had voted “yes”.

Brad explained at the time, “For years we’ve felt like we’ve had to hide our sexuality.

“It’s the most unbelievable thing to have Australia back you in such large numbers across the nation.” 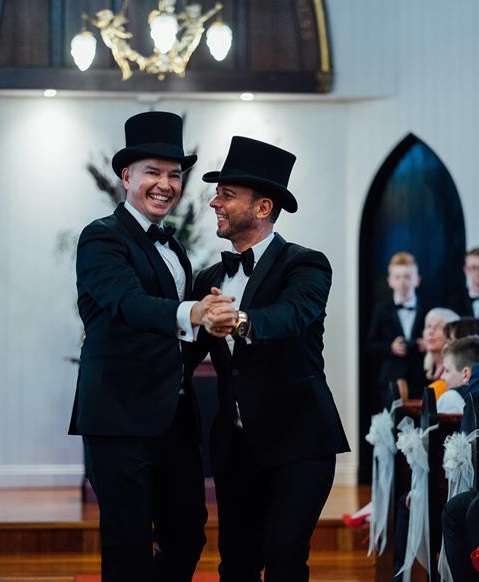 During the postal survey, the couple held an “equality barbeque” in their backyard for neighbours in their Brisbane suburb, which a friend filmed and shared online.

“I used to be a Mormon missionary in my earlier years and I probably would have voted no. Over the years I came to realise I was gay,” Brad said at the time.

“And I think that this is a big, distinguishing feature among many people in our community. People that think of others, and people that are putting them as a priority, are generally the ones that are actually voting yes.”