In a post on the Binary website Smith asks, “Will using Olay cause women to grow a beard?”

“It makes you wonder if Olay even know who their customers are,” she wrote.

“Most women do not want to look like a hairy faced, caked-on make-up made up fella.”

“Their latest ad strays a long way from their roots, and their customer base,” Smith said.

“Will it be another case of go woke, go broke? Seriously, how many women want to look like a shiny-faced, hairy man?

“It is pretty safe to say this attempt is a serious FAIL when it comes to knowing their audience.” 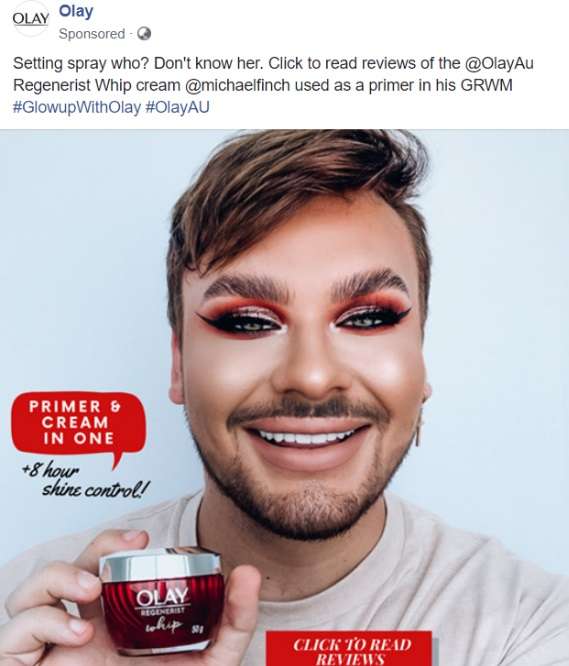 And glamour mogul Jeffree Star makes millions each year from his makeup brand and YouTube channel.

Michael Finch also posts makeup videos to his YouTube channel, where he has over 952,000 subscribers.

And a majority of Finch’s fans on Instagram beg to differ with Kirralie Smith.

“Makeup goals,” one female fan wrote of the ad on the social media star’s Instagram.

“Obsessed with your eyebrows,” another wrote.

Another added, “Beautiful in every way.”

Binary Australia proclaim to “protect children from those who would seek to indoctrinate them with programs designed to promote the LGBTI agenda.”

Non-binary love story Under My Skin comes to streaming