Bank of England Governor Mark Carney announced yesterday the selection of Alan Turing for the new £50 note. Imagery depicting Alan Turing and his work will feature on the new polymer note expected to enter circulation by the end of 2021.

While renowned for his WWII work devising code-breaking machines, Turing also played a pivotal role in the development of early computers.

His consideration of whether machines might think underpins modern research on artificial intelligence.

“Alan Turing was an outstanding mathematician whose work has had an enormous impact on how we live today.

“As the father of computer science and artificial intelligence, as well as war hero, Alan Turing’s contributions were far-ranging and path-breaking.

“Turing is a giant on whose shoulders so many now stand.”

Professor Jack Copeland of the University of Canterbury estimates that Turing’s breaking of one German wartime code shortened WWII by two to three years and saved between 14 and 21 million lives.

Sadly, in his lifetime Britain failed to honour Alan Turing.

The authorities cared more about who he had sex with than his immense contributions to his country and humankind.

Then, in June 1954, he died after eating an apple laced with cyanide.

An inquest declared his death a suicide though some note the possibility of accidental poisoning.

His private letters revealed the anguish he endured before his death.

One of his handwritten notebooks sold for £million in 2015.

Following an internet campaign in 2009, British Prime Minister Gordon Brown apologised on behalf of the government for the “the appalling way he was treated”.

A BBC poll earlier this year named Alan Turing as the greatest figure of the 20th century. 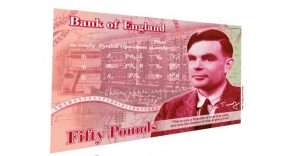 The Governor of the Bank of England chose Alan Turing for the new £50 note from 989 nominations received from the public. The bank previously called for nominations to celebrate the field of science.

Luminaries such as Stephen Hawking figured among the nominees.

Included on the note is a remarkably prescient quote Alan Turing gave The Times in 1949.

“This is only a foretaste of what is to come, and only the shadow of what is going to be.”

John Leech, a UK politician described as the architect of Alan Turing’s 2013 pardon said he was ‘absolutely delighted’.

“I hope it will go some way to acknowledging his unprecedented contribution to society and science.

“But more importantly I hope it will serve as a stark and rightfully painful reminder of what we lost in Turing, and what we risk when we allow that kind of hateful ideology to win.”