As QNews reported yesterday, baiters scam victims into sending them explicit imagery. They use ‘bait-files’ containing hundreds of videos and images of models they believe their targets will find sexually attractive. Better quality bait-files also include forged identity documents of the fake persona. Additionally, baiters utilise techniques that make pre-recorded videos appear to be part of a real-time conversation.

But in reality, the majority of member-posted content on the site is either stolen or baited.

Baiters and those who commission content from them, often target sportspeople.

Dale Napier, Vice President of the Hustlers told QNews the team recognised why people found sportspeople attractive but that everyone should respect boundaries.

“Doxxing, catfishing and other invasions of privacy come from a place of desire. Whether focused on a celebrity, sports star, influencer or an acquaintance, it causes some to ignore the taboo, and laws, on invading other people’s privacy.

“Footy shorts and speedos are a staple gay fantasy. People have always found sexual appeal in athletic performance and sporting clothing. However, baiting and doxxing sportspersons — ignoring issues of consent — is wrong.

“Hustlers recognise the sexual appeal of our sport. In fact, we hold an annual fund-raiser called Rugger Bugger where we dance and take our clothes off. Like most LGBTIQ+ sporting teams, Hustlers also welcomes everyone. Instead of doxxing, baiting and invading the privacy of sportspeople, join a team.”

Dale speaks on the subject from personal experience.

“I previously had personal pics show up on the net. Thankfully, they were from years ago but it changed how I interact with people on apps.

“I now don’t send anything I wouldn’t be happy to see on the net in years to come because I know from experience that could well happen.”

Members of the website also targeted a member of a second gay Brisbane team in a series of posts.

“Baiting people is not only illegal, it displays a complete lack of self-respect and empathy for fellow human beings.” 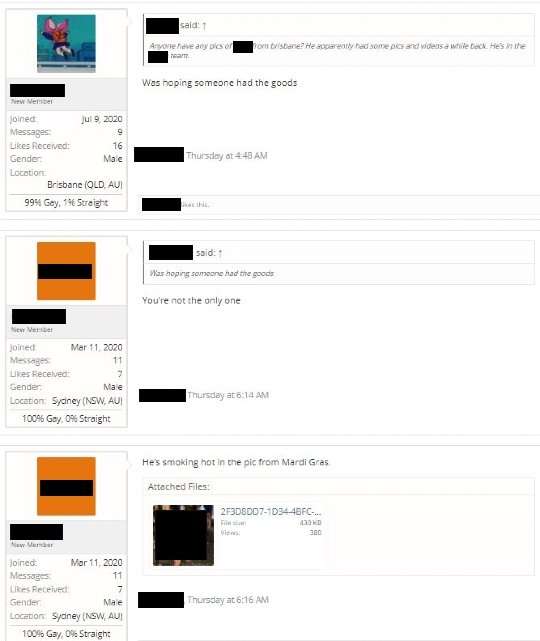 In response to concerns about yesterday’s article, QNews notes that we do not censor the identities of people involved in baiting to protect them. We do it so that we are not faciliatting access to baited images.