The majority “yes” vote for same-sex was announced on November 15, 2017. The same-sex marriage bill finally passed through the Australian parliament that December.

The two stamps, released by Australia Post on October 1, both celebrate the reform, with one depicting a rainbow with the phrase “Love is love”.

The other features two couples – Bec and Paula from Melbourne; and David and Nick from Sydney – as they celebrated the “yes” vote announcement that day.

“With thousands of Australian same-sex couples having tied the knot since the law came into effect, the stamp release recognises a change that has impacted many Australians,” Starr said. 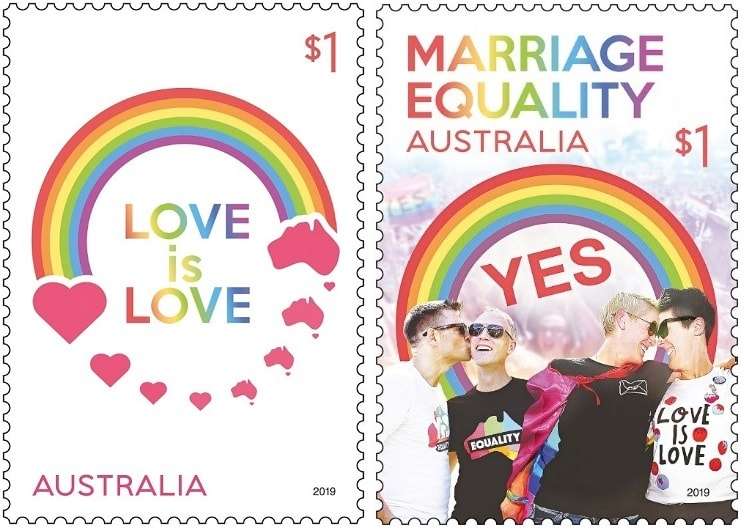 “Like so many people across the country, [the couples] who are pictured on the stamp contributed to the marriage equality victory through their own activism and by generously sharing their stories,” the group said.

Paula and Bec met when a mutual friend predicted their compatibility, and arranged a surprise dinner for them both.

Coincidentally, the dinner was right after a marriage equality rally. Paula had attended every single rally for 10 years.

On the emotionally-charged day of the “yes” result, the couple celebrated at the Victorian State Library.

“To us the YES vote symbolised recognition that LGBTQI+ people matter,” Paula and Bec said.

“It is hope for LGBT youth, and finally acceptance for older people in the community who have battled with stigma and harassment.

“There is still a long way to go for many varieties of equality, however we’re proud of how far we’ve come.

“From a postal vote that fuelled quite a lot of hate, to a postal stamp created out of love.”

The two commemorative marriage equality stamps will be available from Australia Post for the month of October.