Two gay Saudi journalists who fled their homeland after Saudi authorities outed them, face an unlimited stay in Australian detention.

The two journalists discreetly lived together in the Saudi capital Riyadh. By necessity, they kept their relationship secret in a country that punishes homosexuality with the death sentence. The men have been together for 16 years.

The Saudi regime does not tolerate dissent and also demands journalists toe the government line. The brutal murder of Saudi journalist Jamal Khashoggi in the Saudi Consulate in Istanbul last year by people close to the Saudi Crown Prince illustrates the fate of dissenters.

However, one of the men, who spoke to The Guardian denied they were dissenters. The Guardian called him Sultan to preserve his privacy and his partner, Nassar.

“I loved my life in Saudi Arabia and I enjoyed helping the kingdom’s image abroad by ensuring that the foreign media portrayed the country fairly and accurately.

“But after being unfairly targeted by the ministry of media and the presidency of state security, I was left with no choice but to leave the kingdom and seek asylum elsewhere.”

He explained that last year he received a phone call asking him to attend a prison outside Riyadh.

While there, an interrogator demanded he stop working with foreign media. Further, the interrogator threatened to expose the two men’s relationship, making it obvious he knew all about them.

Sultan, a former employee of the Ministry of Media sometimes worked as a field producer for foreign journalists. After his release, he continued to work with foreign media but denies leaking sensitive or negative information to them.

Soon after, Nassar’s family began pushing him to marry and one made a threat to Sultan.

After the couple arrived home one day to see undercover police leaving their house and each received a summons to attend the police station, they decided to flee.

Saudi Arabia places travel bans on anyone they suspect might abscond, so the men knew they had little time to spare.

“It takes about 24 to 48 hours to generate a system block. For anyone who wants to escape, that’s how long you’ve got, that’s the golden hour.”

After driving nine hours to Jeddah, the men caught the first plane to Cairo. They travelled to Australia via a long route that avoided Gulf states that might return them to Saudi Arabia. They arrived here with one and two-year tourist visas.

After clearing immigration, Australian authorities detained them as they claimed their baggage.

Australian Border Force officers then canceled their visas, handcuffed them and drove them to detention.

Sultan alleges that during their time in Australian detention, the men face ongoing threats of violence from other detainees and intimidation from guards.

just.equal on the detention of the gay Saudi journalists

Brian Greig OAM, spokesperson for just.equal, said the law allows people to seek asylum in Australia. He said Immigration Minister David Coleman should order the men’s release on bridging visas while the government assesses their claims.

“The Morrison Government needs to understand that anti-LGBTI prejudice in some parts of the world is extreme and life-threatening.”

“Corporal and capital punishment still apply in several Islamic nations including Saudi Arabia, Iran, and Indonesia, and there is growing hostility and violence against LGBTI people in Russia, Georgia, Chechnya, Ukraine, Poland and several African nations including Nigeria and Uganda among others.”

“Australia must be a safe refuge for people fleeing persecution, including anti-LGBTI hated and violence.”

“This must also include a fair, efficient  and unbiased process for dealing with claims of asylum on the basis of sexuality.”

“It is unacceptable that LGBTI people escaping threats and detention overseas are then confronted with that here.”

Mr. Greig said the men only want their claims taken seriously. The Australian ethos of a ‘fair go’ should apply to them like anyone else. 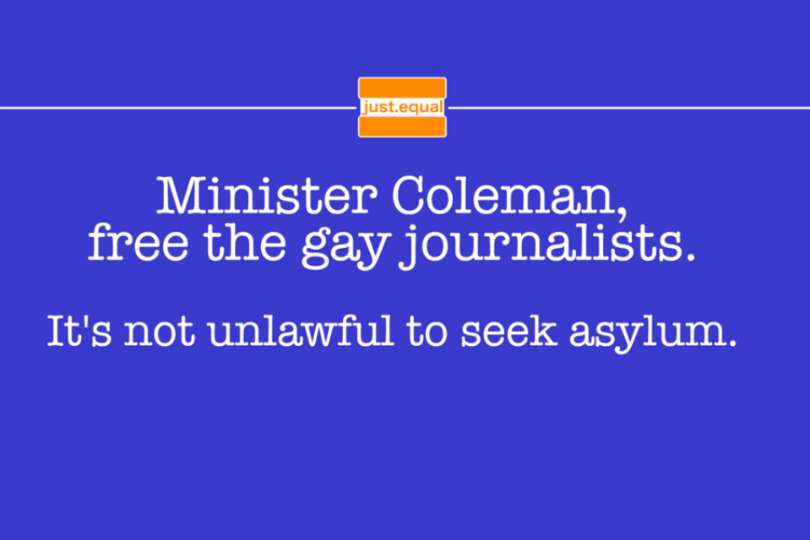