Some community representatives recently received invitations from Federal Opposition Leader Anthony Albanese to meet with him for LGBTIQ consultation on the Religious Discriminations Bill.

The meeting will take place in Melbourne on 30 January.

“The message the organisation would take to Anthony Albanese was to oppose the bill and further, to educate the public about it.”

He said just.equal and other community representatives called for consultation from the first announcement of the bill.

“Our message to him will be that Labor must oppose the bill outright and as soon as possible.”

“This is so Labor can begin the task of educating the public about why the bill is a threat to social minorities.”

“A threat to fundamental Australian values like equality before the law”

“A threat to Labor’s legacy of a strong state and federal anti-discrimination laws.”

In accepting the invitation, Mr Croome also responded with a set of requests to ensure the LGBTIQ consultation is as effective as possible.

1. The consultation should encompass a wider range of LGBTIQ community representatives, including transgender and gender diverse people. Also, other community organisations deserve to have their voices heard including PFLAG, rainbow families, rural and regional communities. Rodney Croome said our elected representatives should also hear from researchers, discrimination experts, support service workers, community activists, and LGBTIQ people of faith and people with disabilities.

2. The proposed laws will negatively affect people beyond the LGBTIQ communities. Therefore, consultations should occur with other affected groups including people with disabilities, women’s health organisations, family planning organisations, and racial and religious minorities.

3. Anthony Albanese and other politicians should consult across the nation. The bill will directly affect Tasmanianians, overriding the existing state Anti-Discrimination Act.

Meanwhile, the new PFLAG+ website encourages anyone opposed to the legislation to write to the government and let them know the depth of community opposition to the bill. 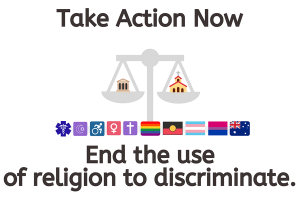