As the world descends into batshit craziness, we got some respite this weekend with the RuPaul’s Drag Race Finale. Not that the craziness didn’t affect the show, with the finalists performing from quarantine and overtly racist commentary on social media regarding the winner of the crown. Then, of course, circumstances conspired to stop the person choosing America’s next drag superstar from themself hosting the finale in drag.

This year’s Miss Congeniality seemed a foregone conclusion. Who could not love Heidi N Closet? She showed us some fabulous drag during Season 12. She’s as witty a queen as we’ve seen on any season and she has a natural ability to engage her audience.

It’s a talent Heidi shares with the Season 12 winner Jaida Essence Hall. Delightful and talented as this year’s contestants generally were, none of the others could match Heidi and Jaida’s aptitude for engaging their audience, even through a camera lens.

Jaida also, for the most part, turned in consistently splendid performances throughout the season. That was in contrast to Gigi Goode, who despite sometimes being breathtakingly good(e), at other times missed the mark entirely.

Gigi’s Snatch Game, for example, was possibly the best Snatch Game performance ever. However, her inability to turn in performances like that consistently cost her dearly. Personally, I was always uncomfortable with some of her costumes which looked like superior versions of something sold in a packet in a cheap fancy dress shop. However clever the cultural references and stunning the costume reveal in the final lip-sync for the crown, her costuming in that final contest was simply drab.

Crystal Methyd, who proved a revelation during the season, once again showed she will become a formidable entertainer with more experience. Fabulous as her wackiness is, she sometimes misses the mark. She doesn’t yet have the experience to always ensure the wacky werqs. She’ll get there. I thought she looked the best of all three queens in the final lip-sync. She’s come a long way baby.

When a new Supreme rises, the old one fades away. #DragRace pic.twitter.com/j6VJgjNP9s

“Ru Paul this is a finale, we need to see your mug. Take that thing off of your face.”

All tea he’s definitely forgotten how to do his makeup. pic.twitter.com/yzYaqppqhr

RuPaul’s lack of drag certainly inspired comment. It is well known that RuPaul does not do his own make-up and many suggested he has in fact forgotten how to. There is also the possibility that RuPaul’s look depends on not only the make-up skills of Raven but that make-up being designed to take advantage of flattering lighting and filters. Anyway, RuPaul’s appearance gifted plenty of ammunition to those who wanted to throw shade at the wealthy fracker.

And it must be noted, World of Wonder producers managed to get make-up through to Brita despite her being isolated in a distant make-up free place called Maine.

Now that it aired, I can talk about it. A little while ago, producers reached out 4 help as Miss Brita was in Maine at her parents & didn’t get a chance to take her kit. Packed her kit myself, was so nervous to shade match her accurately off an image on TV. She looked stunning pic.twitter.com/BnODrwK0Gy

Sherry Pie only ever had much screen time in the debut episode of Season 12. As the season kicked off, so too did revelations of Joey Gugliemelli’s inappropriate behaviour to young aspiring actors. While attention focussed on his catfishing young men to send him nude photos, he also allegedly encouraged some of the men to take steroids.

World of Wonder quickly issued a statement announcing Sherry Pie’s disqualification from the RuPaul’s Drag Race Finale. The beginning of each episode features a title card detailing the disqualification and announcing a donation to The Trevor Project.

The editors of RuPaul’s Drag Race then undertook a miraculous edit which virtually erased Sherry Pie from the show. Despite many expressing concerns that it was too late to edit her out without destroying the narrative, Season 12 proved one of the best seasons yet.

Some diehard fans of Sherry Pie insist she would have won. I personally doubt it. Her drag was rather one-note and she appeared to paint the same face every time she picked up a make-up brush. Her much-lauded acting talent seemed to consist of mugging for the camera.

It seems a pity though that the producers chose not to address the issue more fully.  They are certainly happy for RuPaul to dispense little scripted pearls of pop-psychology positivity in the work-room, but when the shit got real, they bailed. Of course, RuPaul’s Drag Race is reality television. It’s meant to entertain and attract advertising dollars — not to educate.

Joey Gugliemelli posted in an apology when the scandal first came to light that he would seek help. It is rumoured he later entered a mental health facility because of the bullying he was subjected to after news of his catfishing surfaced.

Unfortunately, some fans of the show seemed to display undertones of racism in their criticism of Jaida Essence Hall’s win. Most of those fans apparently favoured Gigi Goode for the crown. However, Gigi Goode earned a crown of her own with her response. 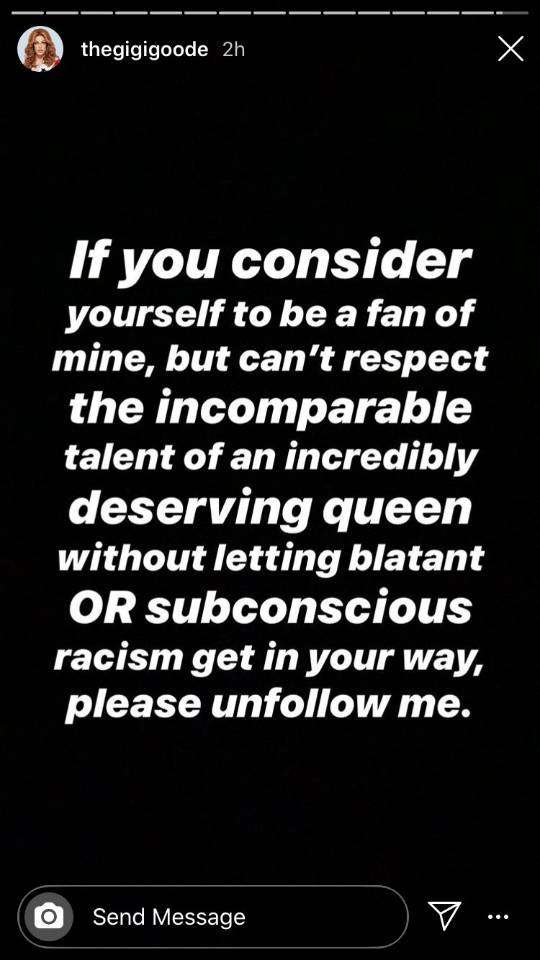 And in Wisconsin where Jaida lives, her fans brought a tear to the eye with their public celebration of her win.

Meet the official cast of RuPaul’s Drag Race: UK Versus the World