Right-wing grifter Katie Hopkins being deported ‘as soon as possible’

Adrian Cheok, a South Australian professor who ran as a candidate for the Conservative Party of former Senator Fraser Anning in the Federal election, received a Queen’s Birthday honour in the 2019 awards. Cheok advocates for a return to ‘traditional values’ and also for sex with robots. He attacks fellow South Australian Penny Wong as ‘Australia’s worst politician’ on his Facebook page.

The professor dedicates his academic fervour to devising methods of enjoying sex with computer-operated mechanical devices because, with only 7.7 billion people on the planet, how else will we access intimacy?

He received an Order of Australia for “significant service to international education”.

He is an artificial intelligence expert and a chairperson of the Love and Sex with Robots conference.

In 2o17, Cheok said he believed relationships with robots would become more common in the future.

He recently created a device that allows kissing over the internet called a “Kissenger”.

“We are now working on several projects on this topic, including a kissing robot and a conversational agent which can have different personalities.”

Adrian Cheok reportedly previously belonged to Clive Palmer’s United Australia Party but left after instruction to dumb down his policies.

He then joined former Senator Fraser Anning’s Conservative Party. In his campaign videos, he advocates for returning Australia to ‘traditional values’.

On his Facebook page, the former political candidate proudly displays a photo of himself with Fraser Anning.

The above image asks for your help so Fraser Anning can save Australia from grave danger. The images behind the former senator appear to illustrate those dangers.

And, of course, Waleed Aly.

Another post showing Labor senator Penny Wong with two male politicians has the caption ‘two and a half men’ and describes her as “Australia’s worst politician”. 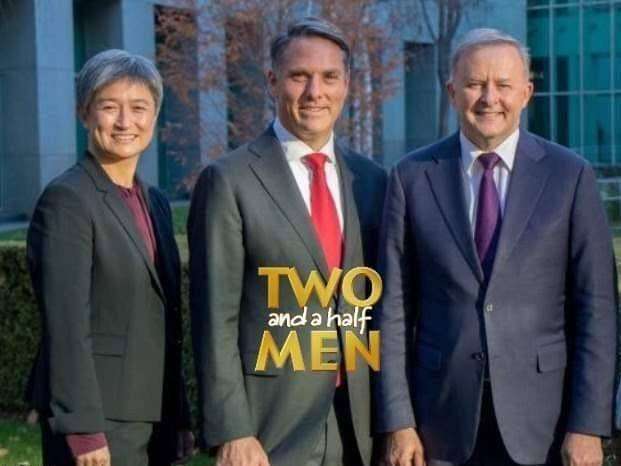 In case viewers of the page miss the inherent homophobia and misogyny in the post, Adrian Cheok’s followers on the page ram the message home in comments on it and another post about Penny Wong.

“Wong is an arse. She not true blue Aussie,” says one commenter.

“Fkn moron,” comments a guy who appears to dislike foreigners, Muslims and vowels.

Others take great delight in denigrating Senator Wong as an ‘asshole’. Of course, anyone worthy of the descriptor ‘True Blue Aussie Patriot’ talks like they just walked out of an NRA convention.

It would be unAustralian not to.

Australia, Love Trump, or Leave It.