Brisbane celebrated its diverse queer community last month through a series of visual and performance art during the annual MELT Festival.

The festival, presented by the Brisbane Powerhouse, invited visual artists from all backgrounds to enter the annual MELT Portrait Prize, with shortlisted entries displayed at the Powerhouse throughout May and June.

The winner of the 2018 People’s Choice award was local Brisbane artist, Louan Walker, with her family-oriented artwork titled #dadlife (pictured).

In the real-life story that inspired the artwork, Simon had dropped by the local convenience store for milk and was caught wearing bright red, poorly applied lippy in public.

This is just one of many stories he and his partner, Holt, can recount as the parents of the very bright, boisterous, and fashionable girly-girl, Olivia.

The inspiration behind Louan’s portrait is self-explanatory – fatherhood.

Having two young children herself, Louan knows how special the experience of raising a family is, so the decision to draw Simon seemed an obvious one.

Louan met Simon through their daughters becoming ‘BFFs’ at daycare and she took note that the children did not view Olivia’s family structure differently to their own.

“There was certainly some curiosity around the whereabouts of her mum, but it was encouraging as an adult to hear the plural ‘Olivia’s dads’ being spoken without a second thought,” she said.

Simon’s portrait is one of pure positivity, however he openly admits that getting to this point was not smooth sailing.

Simon has publicly shared a number of aspects of his personal life online in a bid to help others overcome their own personal battles associated with their sexuality.

He has lived as a straight man, a gay man and now as a family man. Like so many others within the queer community, his relatively late coming out story is marred by loneliness and confusion when it should have been one of elation.

He has lost contact with friends and family, and has connected and reconnected with people in entirely new ways.

Through education and patience, he has been able to save some key relationships that otherwise would have dissipated with the news of his sexuality, but for many he will be viewed as an outcast amongst those that best knew him when he was “straight”. 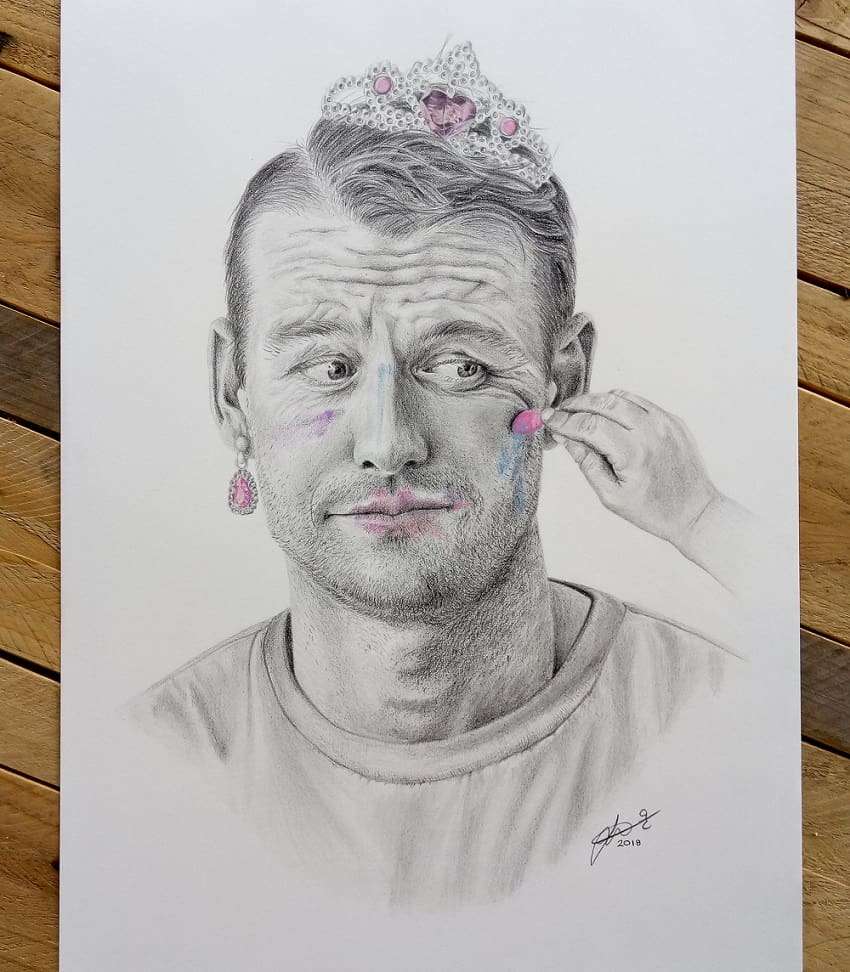 Simon has become a household name on social media as one of Australia’s favourite gay dads, with daily posts sharing small parts of his family life with followers.

He started his Instagram account @champagnedadstyle as a tool to help break free of depression by seeking others around the world who were going through similar struggles.

However he didn’t expect social media to open up an entire network of positive connections.

“Initially I was just looking for motivation and inspiration, but nowadays I try to use my social media presence to help inspire others and show that same sex couples and a loving environment can certainly bring up well adjusted kids,” he said.

Louan and Simon are extremely proud to see #dadlife win the MELT Portrait Prize, and for a rainbow family to be in the spotlight, if only for a moment.

“The portrait represents the positivity of the present and future, despite the challenges faced by Simon and his partner in the past,” Louan said.

As a straight woman, Louan assures critics that she didn’t intend for her artwork to push aside and forget about the tough times faced by members of the queer community associated with their decision to raise a family.

Rather, her objective was to “respectfully depict the normal, human desire of wanting and raising children, and for all parents to find their common ground in the story regardless of sexual or cultural backgrounds.”

Comments from Facebook voters certainly indicated that it was a relatable narrative, with mothers and fathers commenting of similar situations and the love they had for a partner, husband or father in their own life.

Simon said, “We have a long way to go in the fight for equality in Australia, but I think we are slowly moving in the right direction.”

Louan is the artist behind Pencil Head. Check out her work on Instagram and her Facebook page.