To do so, they use models wearing white briefs to bust stigma around discussing sexual health.

“Drama Downunder featured one model for several years as the brand was being established,” Ruth said.

“But we decided to diversify the representation in the campaign in the last couple of years. That has brought on a new wave of complaints.

“Having two men in the campaign has clearly sparked some homophobic backlash.”

Ruth said the most recent complaint raged about the “sexually explicit images of two men, suggestive, compromising and grotesque, 24/7 in full public view.”

They complained the ads give “[no] consideration of who sees these images and how they might impact children, religious persons, conservative people, foreigners and many more.”

“We do not openly promote prostitution, alcohol use & smoking and not normal sexual behaviour, but gay love is displayed like a car advert?” they wrote.

“It is utterly revolting!” 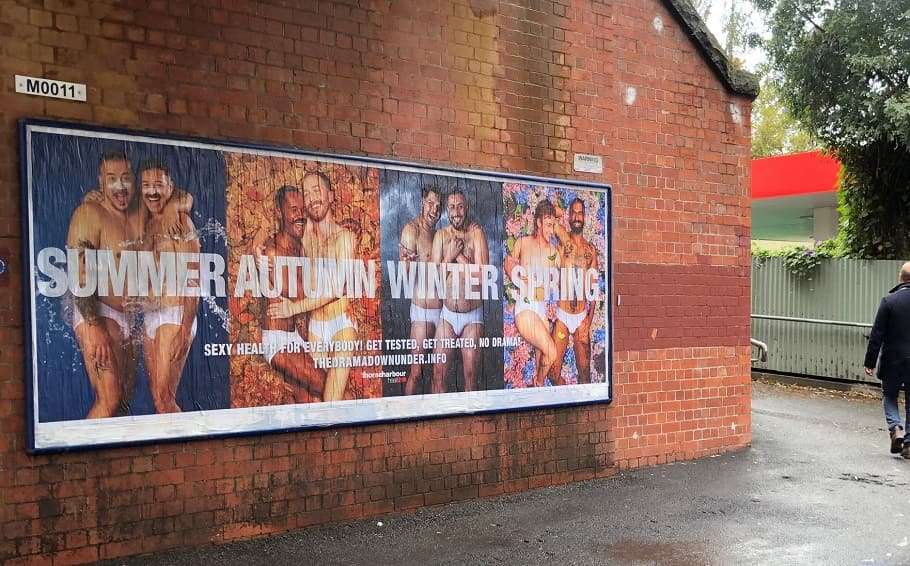 “It’s blatant homophobia and stigmatising views like these that remind us how important it is to have health promotion campaigns like this,” he said.

“Drama Downunder clearly depicts gay men and takes the shame out of having a discussion around sexual health.”

It’s not the first time Australians, in 2021, have taken the time to rage against LGBTIQ inclusion in advertising.

Earlier this month, a beautiful eHarmony ad campaign featuring a lesbian couple cooking dinner was one of the most complained-about of the year.